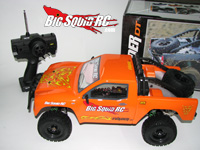 So we got our hands on an Evader DT to review. When we first heard about the truck, there wasn’t a lot of info, all we knew is that it would be based on the Evader series, and might be something to get Duratrax into the short course boom that is happening.

Well after we unboxed it, I think many of us were a little surprised. We didn’t really pay any attention to the stats and sizes that had been posted, and seeing it first hand, well it looked a little… small. Now while some people will tell you size isn’t everything, if you are looking to toss your name into the SC scene, you going to need to be able to size up to the rest. Well, as it turns out the Evader DT wasn’t going after the short course market, but looking to see if they can predict a new trend with the Desert Truck market. Are desert trucks that much smaller than short course trucks? I guess they are. According to Duratrax, the Evader DT is 1/10th scale, and since we don’t own a desert truck to compare it to, we are going to take their word for it. We have a TON of comparison pictures for you to check out, but before we get there, lets see what the truck itself has to offer. 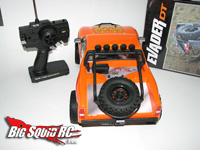 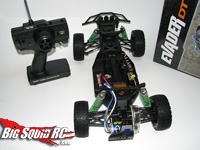 The Basics:
It’s 2WD, powered by a Photon 2 motor and Sprint 2 electronic speed control. You are not going to break any speed records with this thing, but for the size of the truck and audience it’s for, you should be ok with the speed. The adjustable slipper was set to SLIPPERY out of the box, we tightened it up to get a little more bite out of the low end and didn’t see any problems or extra wear on any of the gears. The oil in the shocks feels really thin. We had to open them up to verify that there was actually oil in there. While the thin stuff gives it a more scale look while bouncing around, you will probably want to go with something a little more thicker. LiPo’s don’t really fit very nice in the battery tray. Well, they fit, but then we had all sorts of trouble trying to get the battery strap to latch with the pin. The square shape does not really let the strap bend down to secure easily, and the nub that the body pin goes through isn’t adjustable. So if your a LiPo fan like us, there will be some modifications in your future. 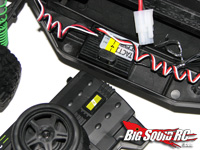 It comes with a Tactic AM radio that we were a little disappointed to see. The Tactic 2.4 ghz radio is a great basher/newbie radio. It works good, it’s cheap, and we really wanted to se the 2.4 version included instead of the AM. While on the subject, it’s hard to see in the picture but the crystal color in the car was yellow, the color on the radio was more of a lime green. For the newbie taking his truck to the track for the first time, I could see this being a minor issue. The dude working at the track tells the newbie to make sure and grab a PIN before turning on the radio, and to find the one that matches. Poor newbie comes back to the counter and says ‘someone has must have the lime green one, because I don’t see it’. That one is gonna sting. Remember kids, look for the numbers!

The Look:
There has been some talk that the cab is a little too long, and the bed of the truck is a little too short for it to look truly scale, but all the extra little details keep you from worrying to much about that. The side mirrors, roll cage, lights, rear bumper are all made of a heavy duty plastic that are connected separately to the body. We beat the heck out of this truck and didn’t loose any of these features. We almost broke a mirror off, but when you hear about what this truck has been through, a dangling mirror just adds to the realism. The extra tire is a nice touch though it does weight the back of the truck down quite a bit. While the truck jumped well, you could tell/feel the tire bringing the rear down faster then you wanted it to.

Driving:
As we tested the truck on the tracks and the street, we had to constantly remind ourselves that this was NOT a SC truck. Every time you pick it up, it just felt lighter, and smaller than what we are use to handling. On and off the track it handled ok. Even with the tire on the back, it wasn’t top heavy and tipping all over the place like we thought it would. Since it’s smaller, the jumps made for 1/8th scale trucks and SC vehicles were not spaced as kindly for the smaller desert truck making it a challenge to time a double or clear a table top safely. It could be done, you just had to work at it. A little more muscle, or some different gearing may help with this issue. Top speed with a 7.4v LiPo was 19mph.

After all of us got our hands on it for some driving time, we were surprised at the durability of the truck. We had taken some really hard hits trying to make some of the larger jumps, and we were landing poorly, going nose into the next jump, or rolling terribly after a big crash. We didn’t break a single part! Not even any of the fancy ‘scale’ stuff like lights and mirrors. So now it was time for the torture.

Bashing:
While you may not believe this statement, it is true. We decided to torture this truck and see where the weak point would be for a basher. Our minds were now set on what will it take to break this vehicle. We RARELY try to destroy a review vehicle on purpose, it just happens, but with the sweet 1 year Stress Tech parts warranty that Duratrax offers, we figured why not!

So the first test we did, toss it off the drivers stand onto the pit lane. The Leisure Hours drivers stand is one of the tallest I have seen, and we have been to a lot. The first time we dropped it down 20 feet, I completely lost it out of frame, so after it drove away, we did it again! And again, it drove away. No damage.

Our second test, drive it down the drivers stand stairs. We figure this would be a good a-arm and shock test. Again no damage. We then put the truck on the hand rail of the drivers stand and slide it down. It went flying down the stand hitting the ground pretty hard. It drove away.

So to teach the truck a lesson, we drove it off the drivers stand, full blast smashing into the ground below. It cleared all the stairs and was really moving when it hit. It drove away! So we did it again (mostly because I had to try it!) and yes, again it lived! OK, at this point we can’t believe nothing has broken. I mean seriously, there are not a lot of other vehicles I would do this to, and not cringe.

So finally, we went for the ultimate nightmare. Full speed, across the parking lot into a curb! I drive a good ways down the lot, turn around, and peg the throttle, faster and faster… WHAM!
Everything’s dead! Finally, we killed it! Upon inspection, the deans connector disconnected from the battery! Plug it back in, and the car drives away! ARGH! So a second time, full speed, WHAM! It drives away. Bill looks at me and says ‘I know what truck my son is getting next!’ LOL. But it’s a good point, if you have someone you want to get into the hobby, and you don’t want to be fixing it every day, we found your truck!

After the day was done, and we really looked over the truck, it turned out we did bend the front part of the chassis that connects to the front bumper pulling out the two very short threaded screws. We bent it back, put the screws back it, looked like it came out of the box, but dirty!

Some final thoughts before you check out the zillion comparison pictures.
This truck can take a beating like no other. Never before have we tried so hard, on purpose to break something, anything, and not have any actual damage! The scale details and look are pretty cool. I’m looking forward to some sort of ‘light’ mod for all the fake lights on the truck, and the roll cage not only looks cool, but is pretty durable. It drives decent, and for the price point it’s hard to complain about a RTR this tough. While we would of really liked to have seen Duratrax toss their hat into the SC market, we understand that being different can be a good thing. A 2.4ghz Tactic radio would of been nice, but again, to hit their price point we understand.

Will the smaller desert trucks catch on? It’s tough to say, but there is another desert truck coming out soon that seems to be getting all sorts of hype, so maybe. If you are looking for something different because everyone else has a SC truck, and you hate fixing broken parts, this truck might be just what you are looking for! Because it’s based on the evader, there are a TON of hop-up parts available like a graphite chassis, aluminum shocks, and bulkheads.

As with all of our stuff, if you see us at the track, stop by, say hi, and maybe we’ll let you take a spin. At the very least, you’ll walk away with some stickers.

Workability – 9.0/10 – The Evader platform is pretty simple and easy to work on. LiPo’s don’t go in so easy.

Bash-A-Bility – 10/10 – We have never given higher than a 10, but this truck could probably earn higher. It took the beating of it’s life.

Big Squid Rating – 9.0/10 – Tentacles.. It’s got a cool scale look, it’s practically indestructible, and it’s easy on the wallet. People may not like the smaller size, but time will tell. If your a basher on a budget, or you know someone who keeps breaking stuff, check this one out!

Compared to the original Evader 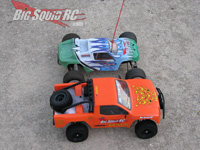 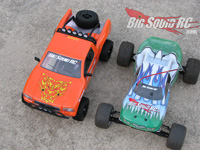 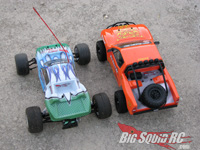 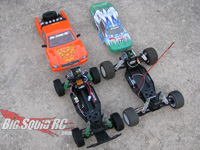 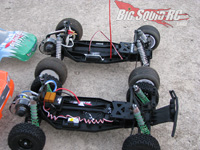 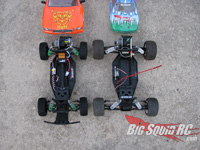 Compared to the Traxxas Slash and HPI Blitz 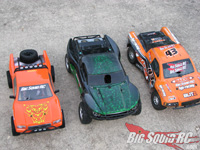 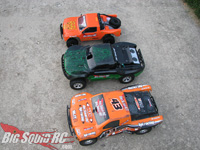 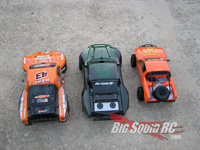 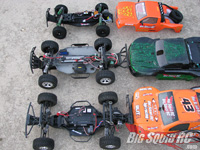 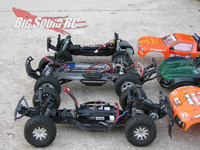 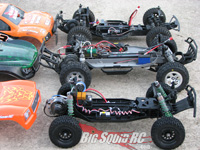 Check out the video of us testing in action!


It’s a tough truck for sure.