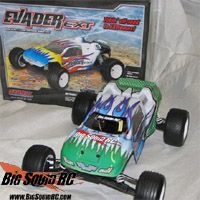 The first time I had heard about or seen the Evader EXT was at the iHobby show in Chicago. The paint scheme was a real eye catcher. Duratrax always has great stock paintjobs, and the EXT was on par. As I stood there taking pictures, the Duratrax representative was talking about the market they were trying to sell to, the price point they were looking to get at, and the durability of the vehicle.

It was a bit funny, he sounded like he had been reading BigSquidRC and was going to market a vehicle for our exact audience! 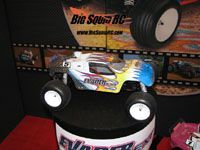 To start things off, the vehicle was going to be cheap. Well, that’s for sure, check out Tower Hobbies website. It’s $119!!! I have spent more at the hobby shop on parts when I didn’t even intend to buy anything. LOL. Next, this vehicle is aimed at the entry level RC people. Being more about bashing than racing, we get a lot of entry-level people. People that are just looking to have fun bashing in their backyards and playgrounds. Lastly, our readers need durability! Seriously, if you have ever been to a local bash here and seen these guys drive…. they could flip a vehicle on it’s lid in a empty parking lot… on accident! 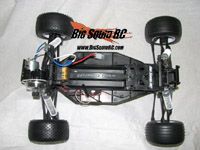 So does the Evader EXT meet all these claims? It has the cheap part nailed, how about the durability? The quality? Short answer.. yes. Long answer, it’s not perfect, but it’s good. For a 2WD stadium truck, I was able to have some fun tearing up the garden, jumping some small ramps, chasing the wildlife, all good times. 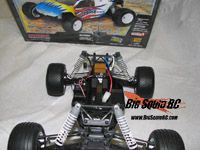 The top speed is a bit slow, at least for my taste. Maybe 20mph with a good wind behind it. As an entry level vehicle though, this is plenty fast, and a good speed to keep you out of serious trouble. The stock tires did ok in the grass and loose dirt, and the oil filled shocks were taking a good beating. After some thorough driving, I was just waiting for something to break so I could be done with the backyard testing. Nada. Battery after battery, bumping into everything that was and wasn’t moving, not one broken part. Guess it’s time to step up the testing! 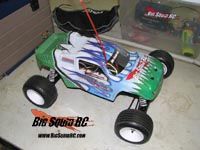 Off to the track I go! The next day I loaded a few battery packs, a few extra ‘testing tools’ and headed out. The track had a good amount of people with all sorts of vehicles. Nitro trucks and buggies, battery trucks and buggies, even a plane. (that’s another story.) As always the track was in great condition, and there was a huge variety of twists, turns and jumps for the testing.

I should mention that I needed to put a different set of rear tires on the vehicle. The hard packed clay was giving me some traction issues with the stock tires, and I was there really to test the durability anyway. So with a fresh set of tires I hit the track. I was pleasantly pleased with the handling, and the vehicle flew great in the air. Just slightly keeping on the throttle kept the nose up and it was handling the jumps just fine. At full speed I could just barely make the doubles, and came up short a few times slamming nose first into the second jump. At one point I was feeling a little gutsy and went full throttle into the triple (knowing I could barley make the first 2) I landed hard, nose down and flipped the vehicle. Stranded like a turtle I had a 1/8th scale buggy land right on top of me, then got slammed by a second who was trying to avoid the whole mess while the marshal was looking for an opening to rescue us all. To my surprise, the vehicle came out alive! Still no broken parts!

Time for the secret ‘test tools’. After a few battery packs, some fun and no broken parts I brought the vehicle back to the pits. With a big grin on my face, and some shock on everyone else’s, I installed a Castle Creations brushless system and LiPO battery. Aww yea! My top speed was now closer to the 40mph zone, and I was flying down the straight! The doubles were like ant hills and I was happy as a clam! (Are those guys really that happy?) The truck was handling great, even with it’s new speed. I was passing people and having a blast.

Now I was taking some serious hits. The speed, the height, and the jump distances were all doubled, and so were the hard impacts. Finally.. after a few battery packs, I slammed hard at the end of the triple, and the vehicle limped off to the side. Upon inspection, the shock cap popped off, and the dog bone came out. Two very common things to happen,no problem. I found the dog bone and headed back to the pits for some simple repairs. Sadly this is where I made a discovery. The dog bones on the Evader EXT are held in with little springs! *sigh*. If you are a fan of BigSquidRC, you will know that this is a serious pet peeve of mine. It’s one thing to find a dog bone, but finding not 1, but 2 tiny little springs after they fly out. Not going to happen. This is one design flaw I still don’t understand. Team Associated did it with the 18t and it bugged me. A good tip from Pro Driver Tim Mohr; you can usually get away with cutting a small piece of fuel tubing and putting it in the out drives. This is good, since MOST (read all) other vehicles do not have these springs, nobody carries them, especially the local track shop. So while I can’t really count that as broken, I will deduct some points for a design should not exist. 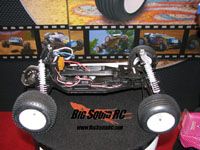 Lets wrap things up shall we? The vehicle is a very good entry level truck! It’s cheap, it drives well, and so far it’s unbreakable. Those MagnaFlex parts really do flex! Even if you do break something, most of the major parts are covered by the Duratrax Stress-Tech Guarantee! There are a few issues: no foam in the tires (what’s that like 10 cents? I know we are trying to stay cheap… but really?), Springs hold the dog bones in(argh!), and for some reason the space on the chassis where the receiver goes is about 2mm too small to actually mount a receiver. They include some THICK tape to help with this problem but I would of liked to see a better fix, where did I put that Dremel?

Keep in mind, the scores for this truck are based on the goals. If I was comparing it to a $900 vehicle, it wouldn’t score as high, but scoring it for what it’s meant to be, these are the numbers I came up with. Hopefully some aftermarket hopups will get me a better solution for the dog bones because I’m going to be running this truck a lot over the winter.

Workability – 8/10 – Simple, easy to work on. Can’t easily fit in a receiver. What’s with the dog bone springs!!