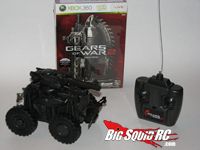 What a sad day for the world of RC. When such huge companies can get together and put out such a piece of junk, it just hurts to think about. Now granted, neither of these companies probably had anything to do with the actual design of the Gears of War 2 RC Centaur Tank, but I’m sure both of them got to at least see one, and had to write off their consent to go ahead and make a few thousand of them. To really get the point across I have made a little video as well. I have a version embedded at the bottom of the review, or you can hit up youtube and search on bigsquidrc gears. 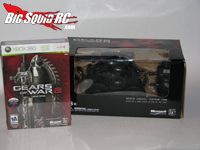 When word first got out about the tank, a lot of people were pretty excited about it. The deal was, pre-order Gears 2 limited edition from Best Buy, and get the RC Centaur Tank for free! Well, that’s what most people thought who didn’t read the fine print that stated ‘while supplies last on the day it arrives’. So wait, let me get this straight… normally I pre-order games because A)It may be hard to find the day it comes out, and 2) because I don’t feel like going to a midnight sale, or waking up extra early to stand outside for several hours to give someone money. But now, even though I pre-ordered the game, I still have to get up and get to the store early because my pre-order ‘gift’ is in limited supply to the first few people in line anyway? ARR! 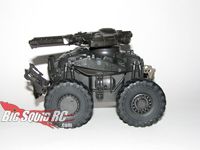 Ok, sorry.. /rant off about the pre-order scam, this is a RC review! So I get the vehicle home. It’s much smaller then I would of imagined, or at least hoped it would be. When someone uses the word TANK in a sentence, I don’t normally picture something smaller then a video game box. (Well, unless were talking about the Ultima 9 Dragon edition box.. I’m still using that thing as a guest bedroom.. awesome!) This thing is tiny! It’s just over 4 inches high, and under 6 inches long. Ok, I can live with that, I mean this could be the the final piece I need to wage full battles with the many toys that sit on my desk. 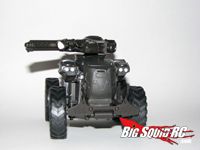 So I open up the packaging, I find some triple A batteries and a nine volt, turn on all the power switches, press the throttle and… nothing. It’s not moving. So I pick it up. Turn off, then on, all the power, press the throttle.. nada! Ok.. WTF! I left up the tank and try to steer, hey something moved! Cool! Oh, wait.. not cool! No proportional steering! In this modern day of RC, the lack of proportional steering in vehicles is all but extinct, even in the cheapest of cheap big box stores! Not acceptable! Well, I can steer, sort of, so I know it has power. I press the throttle, and the wheels start to roll! Hmm.. maybe there was a loose connection, so I set it back down.. nada! Turns out, this vehicle is geared so poorly it does not move under it’s own weight! I took it off the carpet, moved it to the wooden floor, pressed the throttle, it looked like it ‘wanted’ to roll, so I gave it a push.. and voila, it was moving! I tried to turn it back towards me, and it came to a complete stop. *sigh* now what? I pick the tank up, and notice when I try to turn left or right, the wheels jam themselves into the body of the tank causing them to lock up and not roll, thus bringing the tank to a halt! 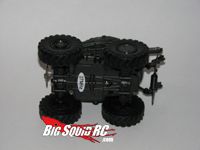 So I know what you are thinking… maybe the poor kid chained to a table that had to put this thing together was having an off day. Understandable, it happens. So I pack up the tank, and a few days later get it back to Best Buy. I kindly explain that they have sold me a brick with wheels, and I would like another one. They were good about it, and let me take a different one back home. I opened it up, put in some fresh batteries, grrrrr still a brick!

If Microsoft would of said with every pre-order you get a toy Centaur Tank to roll around on your desk, this would be ok. It’s not a very good paint job, and the details are a little plain, but hey, a free toy tank.. cool! But NO! They told me I was getting an RC Vehicle, which last time I checked implies that it may actually move. Remotely, under my control!

This thing is a total piece of junk! If you bought one for someone (yes.. Best Buy, who made everyone come to the store early to try and get their LIMITED pre-order item) now has TONS of them for sale in their Xbox isle. They are $30!!!!! DO NOT BUY IT! If you want to get someone a RC toy for the holidays, walk into a hobby shop, drop $90, and get them a REAL RC vehicle they will enjoy. If you don’t want to do that, go to one of the big box stores, pay $19 and get a RC Toy! Even that will work MUCH better then this garbage! If you bought one, find the receipt, take it back! Take the gift card, go by a game or a dvd or something. Hopefully only very few people will find this under their tree and think the world of RC is as bad as this product.

If you have made it this far, make sure to check out the video review. I figure nobody would believe me when I talked about how bad it was, and thought I should prove it.