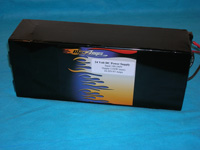 Ok, Brian has just reminded me that we do have noobs that read our site, so I’ll start off the review with some noob friendly questions.

Why would you need a 24 volt power supply? Nearly all better battery chargers do not plug into standard household 110 volt AC power, they are designed from the ground up to run off of DC power, with the most uber chargers capable of running off of 12 to over 30 volts DC.

What does a DC power supply actually do? It plugs into the AC power in your home and converts that over to a much lower voltage DC power for use by your battery charger, tire lathe, etc.

If I already have an AC/DC charger do I need a separate power supply? No.

Why are some chargers only DC? This allows them to dedicate all their room inside to the job at hand, not wasting space on an internal power supply. Typically most DC only units charge at higher rates than AC/DC chargers.

With that said, on to some deeper info. 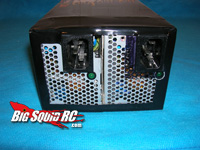 Lithium based batteries have come a long ways in the last 5 years. In the past, 1 hour charge rates were the norm, but as technology has advanced, so has the ability of these batteries to be fast charged. It’s not uncommon to see batteries designed for a 5C charge rate (roughly 12 minutes), with others rated up to 15C (roughly 4 minutes to charge!!!!!).

In the “good-ole days” if a charger could do 8 amps, it was way-super-dope, but if you do the math, that wouldn’t even make a dent in fast charging one of today’s packs. For example, if you have a 5000 mah battery, and it’s capable of a 15C charge rate, that’s 75 amps my friends. 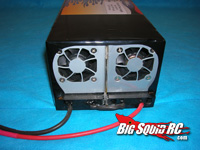 Times have also changed in cell counts- voltages are much higher than they used to be. Lets say that you drive an 8th scale electric buggy, and you are running a 4, 5, or 6S Lipo pack. A 4S pack is fully charged at 16.8 volts, 5S at 21 volts, and 6S at 25.2 volts. So lets say you want to charge a 6S 6000 mah pack at just 1C (6 amps), off of a 12 volt DC power supply. Your battery charger then has to “ramp up” the 12 volts from the power supply to over 25 volts to fully charge the 6S pack. The “rampin up” process the charger must do requires pulling a LOT of extra current from the power supply. To charge a 6S 6000 mah pack at 6 amps, the charger will pull at least 12 amps from a 12v power supply. What if you were trying to charge the 6S pack at a 5C rate (30 amps)? Then you’d be asking for 60 amps! 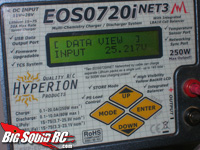 MaxAmps has just released a new line of power supplies, with their top-of-the-line being a 24 volt/47 amp model (they also make a 12 volt/47 amp unit). Not all battery chargers will work off of 24 volts, but most of the new uber chargers will, like the high end Hyperion’s and FMA’s. Using a 24 volt DC power supply, in conjunction with a charger capable of running off of 24v, is by far the preferred method of charging high cell counts and/or at high charge rates. Why? Because running a 24 volt based charging system is much more efficient, requiring typically half the current of those based around 12 volts.

So what’s the scoop on the MaxAmps 24v/47a power supply?

1. Huge power. I put the biggest load I could find around the office on it, and it didn’t even get warm. I hooked up a pair of Hyperion 720iNet3 chargers, each charging a 4S 6500 mah battery at 15 amps, for a total load of just over 500 watts, and the MaxAmps power supply was rock solid. I monitored the test unit’s temperature and saw it rise only 8 degrees above ambient, which is barely noticeable to the touch. I’ve never seen a power supply intended for rc use stay that cool with that large of a load placed on it. Of note, our test unit put out just over 25 volts while at rest. While under the load of the two chargers, the voltage remained rock steady. I do not feel the 500 watt load I had placed upon the supply was even coming close to what the unit was capable of.

3. Clean power. While I did not hook the MaxAmps 24v up to an oscilloscope, I did charge a half dozen Ni-mh packs off of it. I did not experience any false peaking.

4. Good form factor. For a unit packing over 1000 watts, the MaxAmps 24v power supply has a very reasonable footprint. It fit easily into every pit box and bag around the office.

5. Weight. Uber power supplies can be real boat anchors, but the MaxAmps weighs in at 6.5 lbs, easily light enough to be taken to the track or bash spot.

1. While the internal fans move a lot of air, they are on full time. Having the fans come on only when needed would cut down noise in the pit area. 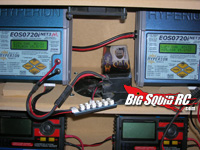 Workability – 10/10 – Works great with chargers that can handle the power!

Big Squid Rating – 9/10 – Tentacles.. I’m demanding Brian have these for all our charging needs!