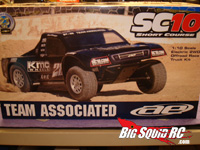 Short course racing is the hottest thing going at local area tracks and all across the USA for that matter, with the greatest truck on the market today….The Traxxas Slash…. So why not ride the coat tales of the hottest thing out and bring on a contender!!??!! That is just what Team Associated did by bringing us another choice in short course trucks with the new SC10!

The new SC10 arrived at my door late one afternoon and after some dinner I set out to build this new truck….For starters i loved that i was actually building a kit again and not just plugging in a battery and hitting the dirt with it….I guess Ii remember the older days where building your truck or car was the thing you did and this taught you what to do if you had to fix it…..Unlike today, most rtr’s where if a kid breaks it he/she doesn’t know what to do to fix it for the most part…Pros and cons to everything!!!!

On opening the box i notice that the graphics on the box made me feel like I was just about to put together a 900 horse powered truck that was going to shred anything that got in it’s way.

Everything was in it’s own parts bag and labeled with matching letters that corresponded perfect with the step by step instruction manual. All the wrenches and tools needed came with the kit so off I went with the build. 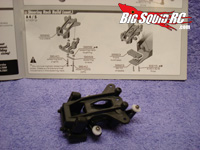 First up was the building of the steering rack, make sure you screw down the adjusting servo saver nut far enough so when you put it together on the chassis it will not rub or hit the front bulk head. 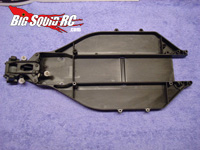 Once that was completed it was time to bolt it to the front of the chassis and then attach the front arms, bumper, front shock tower and hub carriers. This all went together smooth as can be, Associated has always been known for quality fitting parts and so far this has held true to this build. 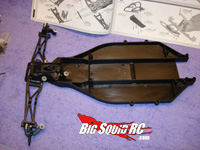 Now came the time for what I like to call the heart of the truck…..”the transmission”!!!!! This step was easier then the normal ball diff build because you didn’t have to chase those pesky little balls around trying to place them on the gear without one falling off and finding it’s way down deep in that 1970’s multi colored shag rug you know we all still have in our r/c work area……It comes with an internal ratio of 2:6:1 and uses just some supplied black grease for the internal gears…You can change this out to heavier diff lube if you want because there is a gasket that seals the two halves together….So no leaks….I chose to use all the stock settings and lubes recommended by Associated for this build. 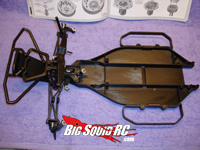 Once done with the tranny it was mounted to the rear of the extended version of the T4 chassis along with the rear arms, shock tower, body mounts, a cool rear bumper with working mud flaps and the side bumpers on the chassis, no problems here.

Next up was to build the rear hubs and insert the dog bones….Once done with that it was time to buid the camber rods…The only thing found wrong in this kit was that the measurement for the rear camber link is incorrect, so don’t sit all night trying to make it the 71mm link it says in the manual…”it will never screw in that far”. It should read 91mm instead….The front link is correct so no problem with that one…These will be changed as you set the truck up to how you like the camber to be set latter.

Well that wrong measurement took a lot out of me late at night so i headed off to bed to get some sleep and hit it fresh the next morning…….Zzzzzzzzz……Morning is came and after some eggs and bacon i was eager to get this truck completed. 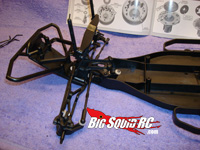 Next up was the dreaded shock building….Associated is not know to be the best at shock building but some how they seem to work, but i have always had a hard time putting them together without damaging the o-rings with the crazy way they have you build them, this step however went extremely well for once…..Filled with the supplied 30 weight oil and mounted them babies on the truck……Wha la!!!! Making good time this morning. 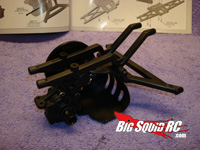 With the bulk of the truck being complete, all that is left is to mount the electronics, install the battery brace, glue up the tires and paint the body….
Installing the servo, speedo, receiver and motor……This was all cut and dry….Installed the battery brace and finish up with bolting up the fresh new kicks to complete the SC10 build……..Everything went together great! 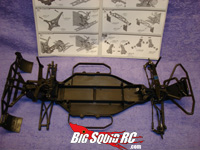 Last but not least was to paint up the clear truck body that comes with the kit but there was not time at the moment to do that because i was going to pack this truck up and run it for the first time at the jconcepts rage race in charlotte, nc…..So i re-cut new body post holes on my proline body that i run on my slash. It fits perfect on the sc10….The rear body holes line up perfect and all that is needed is to drill new ones up front about 3/4 inch forward from original holes. 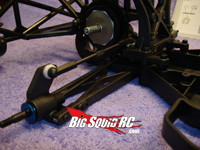 Tires sauced and maxamp 4200 2s hard case charged and ready for action, i hit the track for practice…..Omg…….This beast is a sure handful…..I some how thought that this truck should and was going to just crush the slashes out of the box with all it’s associated hype and multi tuning setups and lower center of gravity bs that was being talked about. 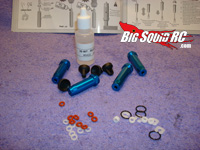 Well, least to say the sc10 didn’t perform with the instructions set up like i taught the great guys in the r&d dept. In area 51 usually come up with for the masses…..I guess i missed something because this truck made me look like i had never driven an r/c ever before in my life……The truck out of the box had way to much steering and nothing in the rear to keep it from coming around all the way in the corners..For that matter, even on the straights…There was a fine line that if you just barely crossed it, you lost it. 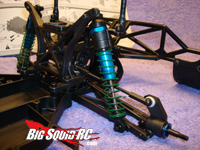 After three rounds of poor quals that saturday i went home and changed up the truck and added weight and cut the associated rear tires to help find traction and threw a setup at it that i thought would help this monster out. The box setup clearly was not going to work on this track……….Well one more chance at getting a good run in before the mains…….This time the truck worked a little better and was not so hard to drive but still right on the edge of crashing……Not having much fun during the a main i was totally lost on the track when the truck decided to go back to it’s old ways of spinning out in every
Corner and very hard to control before hitting the jumps…..I was even called a turtle by the race announcer because i was having to go slow just to be able to finish a lap………Least to say the day ended in frustration with my new sc10 #$&$%^^&! I have never wanted to throw any of my vehicles ever….Until this day!!!!!! 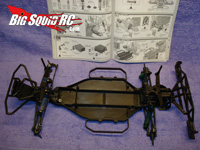 I gave this truck serious love for a month trying to get it to work with all kinds of setups and even having to buy extra rims and other name brand short course tires and extra parts, which i so didn’t want to do. This truck never did handle great and i was losing my fun factor because of the constant work this truck was causing me…..Gggeeeeeerrrrrr!!!!!! So i sold it….. 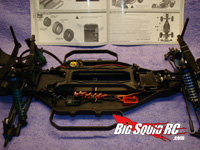 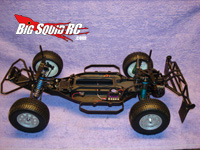 The pro’s:
This truck jumps great when you can put the power down it has great forward bite the tune ability on this truck is awesome. The kit went together great and the truck has great eye appeal when it comes to looking like a real short course race truck. 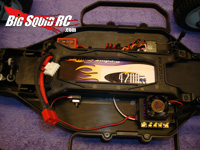 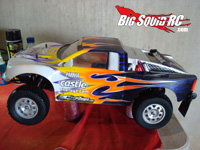 The con’s:
The truck is hard to drive out of the box would be hard to teach a beginner with this truck unlike other corr type trucks tires only good for one track condition and not multiple tracks you have to buy other parts to make this truck work well looks great but not much fun driving.

For more information on this vehicle, please visit www.TeamAssociated.com