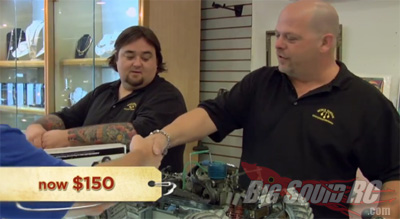 So I’m watching the new episode of Pawn Stars on the History Channel titled “Never Surrender“. A few minutes into the show, a guy walks in with a Team Associated Monster GT which the guy selling it calls his “Hummer RC Car”. Wow. So your in the hobby, and that’s what you think it’s called? But wait! It gets better because as he describes it to while trying to get his best deal he says it does 80mph! ROFL!

When Rick (the shop owner) asks him if it runs, the guy replies with ‘no, it needs a glow plug’. Ok.. you couldn’t get a glow plug for the thing first, then try and sell it?

They end up giving him $150 for the truck, and hand it off to Chumlee to get running. They cut to a few scenes where he pretends to be ‘working on it’ and then when he gets it started, he blips the throttle a few times only to see the truck actually going in reverse.

At the end of the show they show the owner driving it down the hall. It was a little cheesy for us ‘rc enthusiasts’, and Associated missed a great opportunity to get their name mentioned instead of the ‘Hummer RC Car’ but at least there was some RC on TV! So all cheese and whine (yes I meant that) aside, I was happy to see an RC car on television getting it’s 15 minutes of fame. They keep sneaking themselves onto television. If only the industry would keep trying (I know Traxxas is all over TV) to keep promoting the hobby. Ack! I’m starting to sound like Cubby, I better stop there.