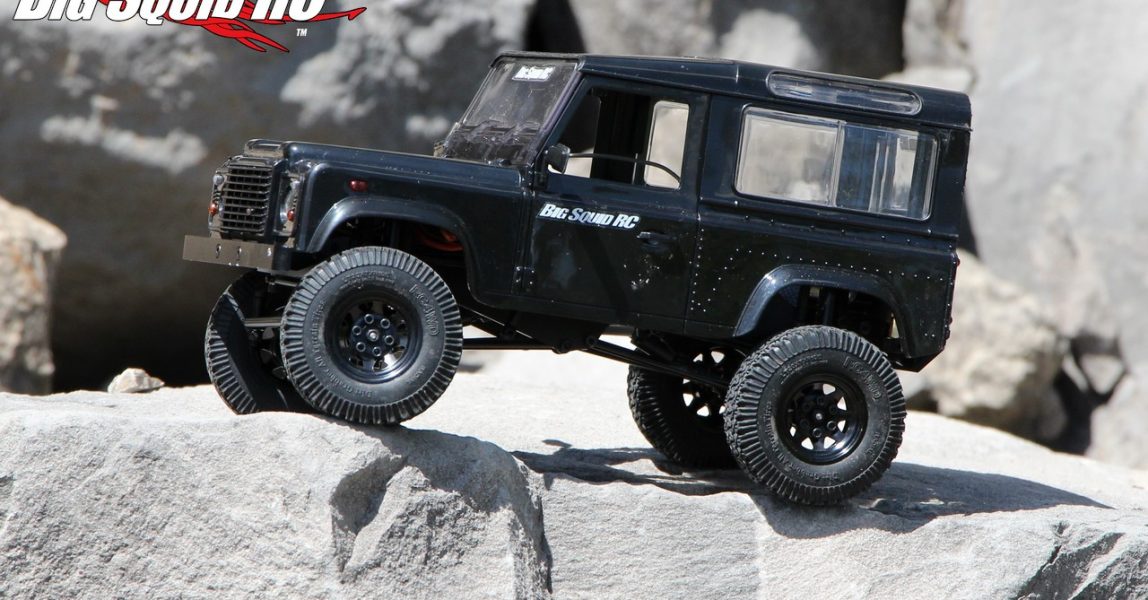 Introduced just over a year ago, the RC4WD 1/18th Gelande II D90 RTR has proven to be a favorite among people who drive mini scale crawlers. The smallest G2 is not only loaded with the scale detailing that today’s off-roaders demand, but also comes in an affordable, easy to drive, RTR platform that makes it easy for new hobbyists to enjoy. We’ve been bashing on one for quite some time, what do we think about it? Is it the best mini crawler you can buy? How well does it drive? Keep on reading to find out our thoughts on the 1/18 Gelande II D90…

Primary Competition: There are several mini sized RTR crawlers on the market like the Pro-Line Ambush, ECX Temper, etc.

What’s Needed To Complete: You will need to supply four AA cells for the transmitter as well as a Lithium battery charger for the truck’s battery.

Build Quality: After passing the truck around the room we could find no fault with its build quality. Everything appeared to be well assembled.

Test Venues: Because of the portability of the little G2, we used it at a wide variety of different locations. From various hand made indoors courses, to a half dozen different city parks, we took the truck with us everywhere we went for over a month.

Set-up Notes: Like all of our reviews, we tested the truck bone stock. To handle the charging duties we used one of our favorite chargers, a Hitec RDX1.

Turning: The 1/18th G2 drives a lot like its bigger brothers from RC4WD, like a true rock crawler. It has all of its diffs locked, so it tended to push on high bite surfaces. In the rocks, where it is intended to be used, the truck did a fine job of picking lines. By the way, the stock servo had plenty of speed and torque for normal use, but the truck could use more steering angle for a tighter turning radius.

Jumping: While we didn’t catch massive air with the truck, we still managed to get in some jump testing. Being a crawler with very little top speed, it is rare to catch air with the G2. When we did manage to get the tires off the ground we found the landings to be on the bouncy side. The power system simply didn’t have the rpm on hand to help pull the nose up during an endo but a tap on the brake instantly helped bring down the nose when it was too high.

Bumps/Whoops: With the shocks set-up for crawling, they didn’t have much in the way of compression or rebound damping. A quick jaunt over a rough section was rather bouncy with the smallest G2. If pounding stadium style whoops at speed is your thing, a rock crawler, especially a small one like this, should not be at the top of your “to buy” list. However, when going over the regular undulations at low speed in a crawling environment, the 1/18 G2 did a fine job considering its size.

On-Road: The speedo on the RC4WD lets you go directly from full forward to full reverse, and vice versa. Going from full reverse to full forward allowed us to pull some cool wheelies on pavement. Otherwise, the low top speed, and a tendency to roll when turning at top speed, simply showed us that there are much better machines for pavement than an 1/18th scale rock crawler.

Grass: The 4wd system and soft, grippy tires did a much better job in grass than we expected. However, the power system held the truck back. There were times when going through taller grass, let’s say grass about 3″ tall, that the truck simply ran out of power. So while the chassis was willing, the power system was not.

Crawling: Here we go, crawling was what the G2 was made for and it did a solid job for a mini RTR. The stock tires are quite soft, as are the foams, and this allowed the truck to get up and over sections that we thought we had no shot at. No, because of its size, the 1/18th G2 simply can’t get over the size of obstacles that a 1.55″ or 2.2″ truck can, but for its size, we were very impressed. The ESC comes programmed a bit soft on drag brake, and the power system isn’t the best for crawling, but we found the chassis itself to be extremely capable. Whether we were outdoors on a real rock course, or indoors on a course made from carpet and cardboard, the chassis did a solid job of getting up and over reasonably sized obstacles.

Tires: As mentioned earlier, the stock tires/foams are quite soft, something that was a big plus in the rocks. They did an excellent job of finding grip on hard rock surfaces, grass, and on carpet. The tires have a lot of ribbing on the sidewall, also a big plus when in a bind. They didn’t work so well in soft/loamy dirt, but overall we feel that they were an excellent choice.

Power: Here is the biggest downfall on the 1/18 G2, power. While the truck has a decent top speed for a crawler, the tiny motor just didn’t have enough torque when the going got tough. When bound up in the rocks, or when in deep grass, the truck would simply run out of power and refuse to keep turning the wheels. Gearing the truck down a bit could help, as could installing a motor with more raw torque and wattage. Also, we found the speedo to be programmed too aggressively right off the bottom. For example, for a rock crawler, you want the low end power to be ultra smooth. The stock programming on the 1/18 G2 caused the truck to lurch a bit from a dead stop and the first quarter of the trigger gave too much power. This made it difficult to ease into the start of a steep incline or to make small maneuvers when in tricky rock sections.

Radio: The XR2 is one of the new “crawler style” transmitters that is ultra-compact. We had no issues with the way it performed as it had plenty of range and never once glitched on us. While it is tiny in size, the XR2 fit a wide variety of different hand sizes, and on longer days out on trail, we appreciated its compact size.

Broken Parts: With the truck being made mostly from metal, we found it to be quite tough. However, our job isn’t done until a truck is broken and somehow we managed to pop a center driveshaft when tumbling down a giant rock face.

While the Velcro battery tray works OK, having some sides on it would definitely help keep the battery in place during big tumbles.

The 1/18th G2 uses 4 bolts to keep the body on. The body mount system is completely hidden, which is a huge upside on a scale machine, but keeping track of those 4 bolts when out in the field can be a pain.

The side mirrors look good but are made from a hard plastic. Ours survived testing without breaking, but it is just a matter of time until they get knocked off. We would have preferred rubber or a more flexible plastic used on those.

While RC4WD supplies a 2S 850mAh LiPo with the truck, that pack isn’t wired to be balance charged. Back in the day nobody balance charged LiPo packs, but in today’s era we would have liked to have seen a balance tab soldered onto the pack.

How about those axles? The truck comes stock with 1/24 cast Yota II axles and they are mega-beefy. Very nice.

The manual is very well done making it easy to see exactly how all the parts of the truck go together.

While its small size works against it when driving with larger trucks, it helps a ton when driving in smaller areas or when transporting. We were able to make numerous crawling courses in our BSRC offices that were as small as 3′ x 6′. Also, because of its small size, we were able to take it with us just about everywhere we would go. The truck and transmitter easily fit in a small bag that took up virtually no space when traveling.

Best Mod: A smaller pinion. Yes, the BSRC Bash Crew is all about speed, but the 1/18 G2 could benefit from dropping a couple of teeth on the pinion. Gearing it down would help maximize the available power from the motor, as well as making it easier to drive in the rocks.

Time To Bash: B There isn’t much to getting the RC4WD up and running. A LiPo is supplied for the truck that you need to charge, otherwise you pop four AAs into the transmitter and you are ready to bash.

Workability: B The truck has a nice open layout that makes it super easy to spin wrenches on. However, some of the hardware is quite small, so if your eyesight isn’t what it used to be, be prepared to use some glasses.

Car Show Rating: A Like so many other products from RC4WD, the 1/18 G2 D90 has an amazing amount of scale detailing. The body is hard plastic and exceptionally detailed, while its undercarriage is loaded with heavy duty metal parts. The wheel/tire combo also had a fantastic scale look.

Bash-A-Bility: B We just didn’t break many parts on the smallest RC4WD. We ran it hard, but the chassis held up quite well.

Fun Factor: B More power, along with better gearing, would help pump up the fun factor score, but as is, we still had a great time with the truck. We also really liked the fact that it was so easy to grab and take along with us on our various travels.

Handling: C The shocks don’t have a lot of travel and not much damping, this gave the truck a rather bumpy ride. Still, the stock servo did a nice job and the overall chassis geometry worked well.

Value: B We feel that the 1/18 G2 gives you a good of bang for your buck. From the immaculate body, to the heavy duty axles, to the high quality wheels and tires, the mini G2 is an inexpensive way of getting a true taste of the scale scene.

Parts Availability: C Parts are easy to find on-line, but most local hobby shops do not have parts on the shelves for it.

BigSquid Rating: B With scale realism galore, in a package small enough to be used just about anywhere, we are big fans of the 1/18 RC4WD G2 D90. The G2 opens up a lot of smaller areas for getting a quick rock crawling fix and the G2 will no doubt become one of our “go to” vehicles this winter when there is two feet of snow on the ground outside.