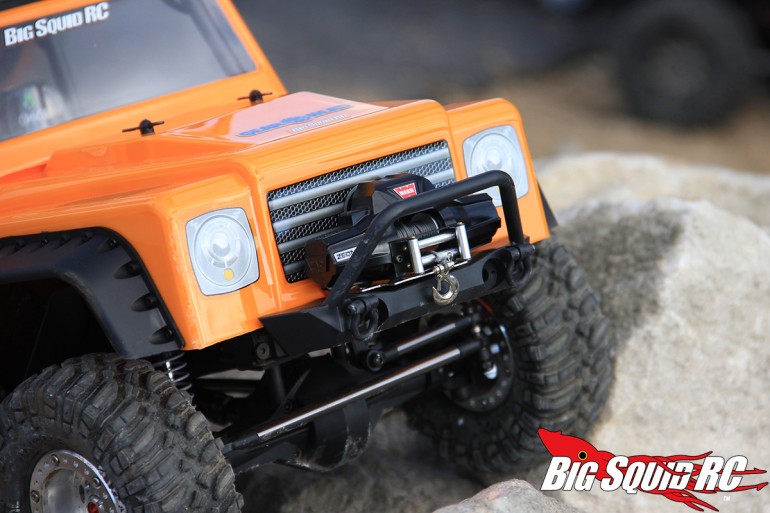 When it comes to scale accessories, RC4WD is arguably the top name in the business. A few weeks ago we got our hands on their new 1/8 Warn Zeon 10 Winch and put it to work in a freshly built Axial SCX10 Dingo.

For the longest time a winch has been more of a decorative piece of scale swag than something that was really functional. Nowadays that won’t cut it, especially since the advent of RECON G6 style “no Hand of God” events where the only way to flip over or get up an impossible section of trail is by the use of recovery gear. With that in mind, we’ve been using the Zeon the last couple weeks and are finally ready to deliver a verdict.

The winch mounts to a bumper by way of 4 screws. I drilled the holes out in my stock Axial JK bumper and it mounted up fine. It looks extremely trick. Even though it’s 1/8 scale I feel like the proportions aren’t that out of whack when fitting it on a 1/10 scale truck. If nothing else it just makes the rig look extra tough due to the bigger proportions.

You will also need a winch controller, of which we opted to go whole hog and use the RC4WD Wireless Winch Controller (street priced at $49.99, part #Z-S1092). Installation was fairly simple as you need to mount the controller box somewhere on the chassis with servo tape, plug the winch in to it and then the Tamiya style connector into a power source. Some people use small auxiliary batteries to power their winch but I opted to use a Tamiya-to-Deans connecter and Y adapter to let it run off the main 2S pack.

The cool looking wireless remote, very much in the style of a 1:1 handheld unit, syncs up with just a few button presses. One button feeds your line, the other reels it in. Really simple. There is also a spot on the controller to put a lanyard through so you can keep track of it easily.

Now let’s get to the good stuff – the Zeon is a beast. With a payload rating that is double most 1/10 winches, this thing has major grunt. My Dingo weighs around 7 lbs and the winch had zero problems dead lifting when hung from a tree. Just to see how it would do, I put a 3 lbs steel weight block on the battery tray while it hung there and it still lifted with no issue. I’d say that’s a big pass.

Deadlifting is fine and dandy, but a rolling drag is arguably more important when trailing. Most of the time you’ll be under power when when trying to climb an obstacle, after all. Again, this winch excels as there wasn’t a hill I couldn’t get over. To see how much it could stand, I held the rear of my truck in place while winching to a tree trunk and it bent my plastic bumper hard before starting to pull the unit out of the mounting holes. Again, this was a big pass. Kudos to the rope as well.

As I mentioned earlier, scale winches have long held the reputation for being unreliable and burning out easily. This is why they’ve never been popular around the office. The RC4WD Warn Zeon has changed our opinion. It’s a big, powerful unit and coupled with a wireless remote it’s one slick package. It looks fantastic and pulls like hell. Not sure what else you could ask for.

For more RC4WD news on BigSquidRC you can hit up This Link.