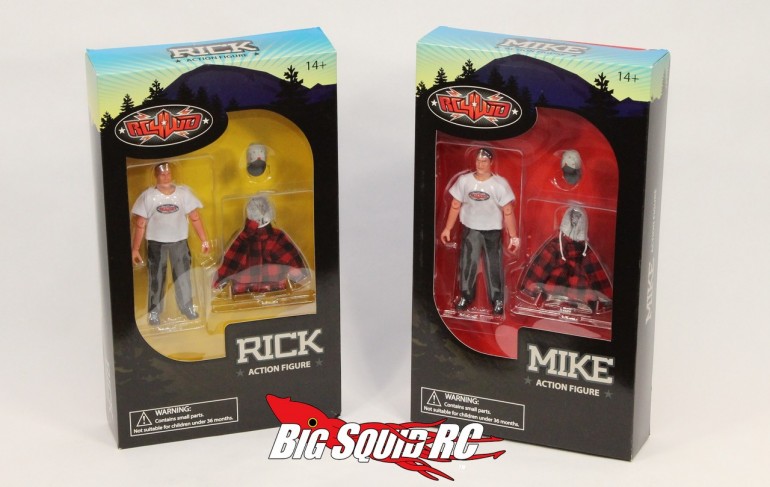 With scale realism being all the rage, it was only a matter of time until a big name in the rc business put out there own “rc specific” Action Figures. No longer does the rc public have to settle for some crazy looking wrestler or have to try scavenging up something from the blow-out aisle at the local Wally World. We’ve spent a few weeks with RC4WD’s “Rick” and “Mike” action figures to determine how well they work. Are they tough enough for the job? Do they look scale authentic? And most importantly, are they worth the cash? Read on to find out…

The RC4WD action figures are highly detailed. For example, look at the second picture in the gallery below (which is a close up of one of the guy’s faces). Notice the coloring in the lips, eyebrows and the eyes themselves. Also notice how the face and hair of Mike is much different than that of Rick. Some serious detailing went into the RC4WD action figures.

The clothing, even the hat, fits well and doesn’t limited travel of the body parts.

Their overall bodies look in correct proportions to a real human. They don’t have a huge torso and short legs, or vice versa.

The RC4WD logo on the shirts and hats are a nice touch.

The feet can be popped off, but not so easily that they accidentally come off. Hopefully we see some different styles of shoes coming in the future to help personalize them.

Each action figure comes with its own back story. This is kind of neat and goes to show how serious RC4WD is about their action figures.

The way the arms/hands articulate is perfect when sitting behind the steering wheel of a truck.

Our staffers went back and forth about the size of the action figures. Standing outside the truck the action figures seemed to look a bit on the short side. However, their relatively small size made them an easy fit inside the cab of an RC4WD Trailfinder 2 and they also looked about the right size when inside the cab. If you go by actual size, and if they are indeed “1/10th” scale, their height would work out to just under 5 feet tall.

For you guys that are into doing action figure poses in your rc garage, the shoulders don’t articulate as much as we would have liked them to. The shoulder on the RC4WD figures can only rotate (about the same as a Barbie doll), this limited some of the poses would wanted to put them in.

Car Show Rating: A With highly detailed faces and RC4WD logos on the hats and shirts, these are the coolest looking action figures on the rc market.

Bash-A-Bility: A Ok, you guys know us, you know a review isn’t over until something gets busted up. We threw the action figures against walls, dropped them from 6 feet high to concrete (read- threw them as hard as we could), and got them good and muddy on the trail. We didn’t break them or find any durability issues at all.

Fun Factor: B We had some fun posing and bashing around the trail with the action figures. If their shoulders had more articulation we would have given them an “A”.

Value: C $30 isn’t cheap for an action figure, nor is it crazy expensive, therefore we gave them a “C” in this category.

Big Squid Rating: B+ Like most everything that RC4WD produces, their action figures are high-end, ultra-detailed, and we can highly recommend them to you.