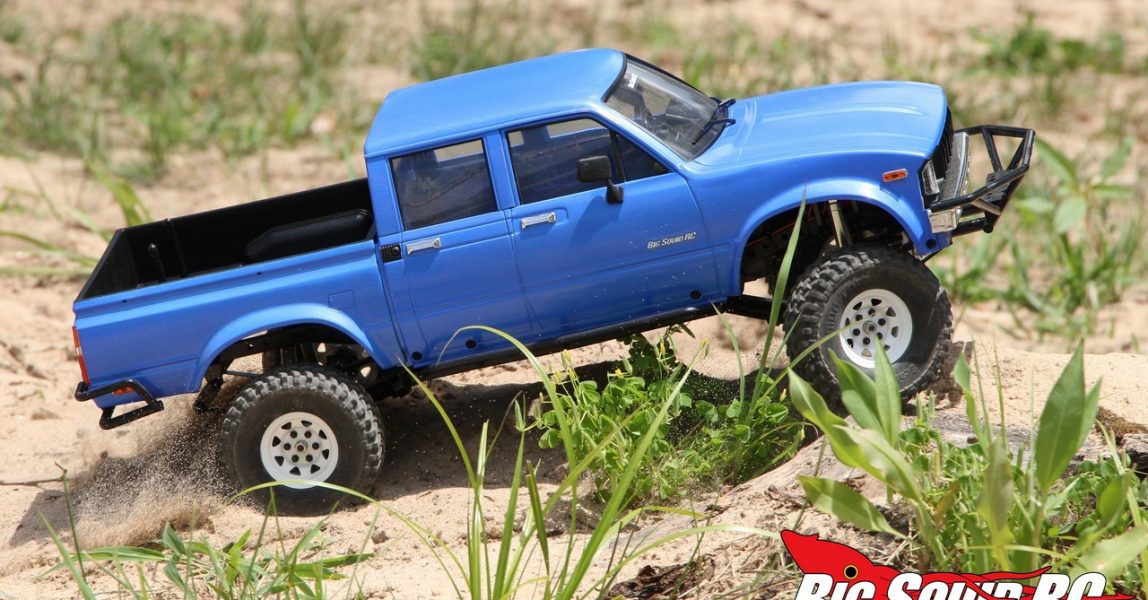 Scale crawling gets bigger every day. What was once a small niche, is suddenly the hottest product segment in rc. And while hardcore scalers demand a kit to alter and modify as they build, a lot of the new people entering the scale movement come from the ready to run world, or simply don’t have the time to build a kit. That is why RC4WD released their popular Trail Finder 2 LWB Mojave II in RTR form. To see if the TF2 LWB RTR was a good truck for entry level scaling, we picked one up and have been bashing it ever since. Is the RC4WD a good entry level scaler? How capable is it on the trail? Is it worth the cash? Read on to get the scoop…

Primary Competition: The RC4WD is competition for other scale crawlers, although there aren’t a lot of other 1.55″ models on the market.

What’s Needed To Complete: You won’t need a lot to get the LWB RTR up and running. You will need four AA batteries for the transmitter, a LiPo for the truck, and a battery charger. Also of note, while the RC4WD comes as a RTR you will need to attach the front bumper and insert the Velcro battery straps before driving. This took us all of 2 minutes.

Build Quality: We could find no faults in the build quality on the LWB RTR. All the bolts were tight, but not stripped, the gear mesh was perfect, and our shocks were well built.

Test Venues: For once we did not use our local Costco parking lot! Nor did we need to visit our local 1/8th scale track. We did the entirety of our testing at 4 local parks.

Set-up Notes: Yup, we tested the RC4WD bone stock. We popped four MaxAmps AA batteries into the transmitter and used a 2S MaxAmps LiPo to power the truck. Charging duties were dialed thanks to a Hitec RDX1 charger.

Turning: On high grip surfaces the fully locked diffs gave the truck a lot of push. But then, that isn’t where the LWB RTR was designed to be driven, it was designed for mud, sand, and rock crawling. In its native element, the truck did a decent job of picking a proper line. The stock servo is what you would expect from an RTR, it lacks in both power and speed, but at least it has enough yank to generally get the wheels pointed where needed when picking your way through a tough rock section.

Jumping: What, you think we didn’t catch some air with the truck? Of course we did. However… we would advise that you keep your airtime to a minimum. If big air is your thing, there are a plethora of other trucks on the market that are better. The RC4WD is intended for crawling and trail driving, thus meaning that it simply doesn’t have the power, wheel speed, or suspension, to handle big jumps.

On-Road: How does the LWB RTR handle on the streets? Just about like you would expect a truck with fully locked diffs and leaf spring suspension to handle. Yes, you can certainly get around with the truck on pavement, but with a low top speed and a lot of push in the corners, if on-road is the primary spot that you will be driving, you will want to look elsewhere.

Grass: Now we are finally getting in the RC4WD’s element! Our test truck was a beast in grass. The stock 1.55″ tires have an aggressive tread pattern and they do a fantastic job of getting the truck through grass. Grass 3″ tall was no issue for our test truck and it surprised us with how well it could keep up with bigger trucks through taller grass sections.

Trail & Crawling: With most of our test crew coming off of driving 1.9 or 2.2 inch machines, we expected a let down in real world performance with the 1.55 tires on the RC4WD. What we found was that the truck was much more capable than expected. The truck isn’t as top heavy as some on the market, which really helped out on the trail, and its aggressive tires did a great job in loamy sections. Our test truck did a wonderful job when asked to go up rocks when pointed straight at them, but its true-to-life articulation held it back when hitting them at an angle. Overall though, we were very pleasantly surprised with what the LWB RTR could pull off out on the trail in box stock trim.

Tires: Oh yes, we liked the stock Mud Thrashers. With an aggressive and deep tread pattern, they were best in loamy dirt and grass, but worked well just about everywhere. No, they aren’t nearly as soft as comp tires, and no, the foams were on the firm side, but for RTR use, they did their job quite well.

Power: A 45 turn brushed motor comes stock in the LWB RTR. While not big on raw wattage, it did exactly what it was supposed to do, put out buttery smooth, easy to control, power. The most important part of any rock crawler’s power system comes from zero trigger input to 1/4 throttle. Here the Outcry II ESC and motor were a pleasure to drive. Power comes on in an extremely linear fashion, making it easy to give the truck the perfect amount of throttle to make a tricky section. Top speed comes in at 5 mph on a 2S pack, which is slightly slower than a fast walk speed, but in general the power system did a great job.

Radio: The truck comes with RC4WD’s XR3 transmitter. That is a 3 channel unit that has a lot of adjustments and enough channels for normal scaling. We had no range or glitching issues with our test unit, and our larger handed drivers liked its sizing. The throttle EPA adjustment is right on top and easy to get to, allowing it to be used as a sort of cruise control when needed. The trigger had a serrated flesh side, which we prefer, but we found the wheel to be too far away from the grip for easy one handed driving.

Broken Parts: For the amount of abuse that our truck suffered, we broke very few parts. When bound up tight in the rocks we were able to snap the center rear driveshaft and we also had two of the bolts that secure the front knuckles to the axle fall out. Otherwise, the LWB RTR held up extremely well.

We felt that the drag brake was a bit soft out of the box. That is better than it being set too high for sure. For noobies the drag brake is probably spot on, but we were looking for a little more drag brake when attacking steeper sections.

The RTR comes with rubber side view mirrors. Of course these are an unbreakable design, which is a great thing. The downside was that ours keep spinning around, so we added a couple drops of CA to keep them pointed in the right direction.

The body is secured by 2 body posts and 4 bolts. The body posts are extremely long, which could come in handy when mounting other bodies, but seem unneeded entirely on the stock body. Those extra long body posts are easily enough snipped away, but having to remove 4 bolts to get the body off can be a pain while out on the trail.

Shall we talk about hop-ups? While some trucks barely have any, there are tons of hop-up parts available for the LWB RTR. From bumpers to tires, from suspension to bodies, part of what makes this truck so cool is that once you are ready to hop it up, you have a lot of different upgrades to pick from.

What sets the LWB RTR apart from its competition? A lot of things, but primarily its extensive use of real metal parts. While the vast majority of rc cars are made entirely from plastic, the RC4WD is mostly made from metal. Yes, all those metal parts make it heavy, but they also give it more of a realistic appearance, as well as making it drive more realistically.

Speaking of realism, the LWB RTR comes with a hard plastic body. If you want the most accurate scale detailing possible, hard plastic is the way to go.

The owners manual is glossy on the outside and filled with everything you need to read on the inside. It had loads of exploded part views and was very easy to read and understand. Big kudos to RC4WD on that one.

Best Mod: Like most RTR crawlers, we are going to recommend a steering servo upgrade. Picking up a Hitec with more power and quicker transit speed will do wonders for the steering on the RC4WD.

Time To Bash: B We found that our test unit was quick and easy to get running. Even if you are a first day noobie you will be out driving in a matter of minutes.

Workability: B An open layout greets you after you pull off the body, making it easy to work on. The extra bolts used to hold the body on can be a pain to use, but general wrenching on the truck was quite easy.

Car Show Rating: A RC4WD is lit when it comes to scale realism and the LWB RTR is no different. The list of details is longer than we would ever want to type out, but one look at any of the photos in this review instantly shows you that the LWB RTR is at the top of its class in looks.

Bash-A-Bility: B After several long trail drives we had very few issues with our test truck.

Fun Factor: B For what the truck was aimed for, scale crawling and trail driving, we had a fantastic time. The LWB RTR just looks so scale, and when the going got tough, it did a legit job of getting up and over tougher obstacles than we expected.

Handling: B For straight up rock crawling and trail ability, the RC4WD does a solid job for being a 1.55 truck with leaf springs.

Value: A Our bash crew thought the truck was a great overall value. For instance, you could take another brand of truck and start adding metal parts to add to its trail cred, but doing so would cost you a small fortune. You get all those fancy metal parts and scale realism for under 6 bills with the LWB RTR.

Parts Availability: C Yes, spare parts are extremely easy to find on the web. And while you won’t find a ton of parts for it at most local hobby shops, RC4WD is being stocked more and more at local dealers.

BigSquid Rating: B+ The RC4WD TF2 LWB RTR is all about scale realism. It has detailing that some other manufacturers can’t even dream about, plus it drives like its full scale counterpart too. The RC4WD is a great introductory level scale truck that will give you hours upon hours of fun on the trail. Yes, we can highly recommend it to you.