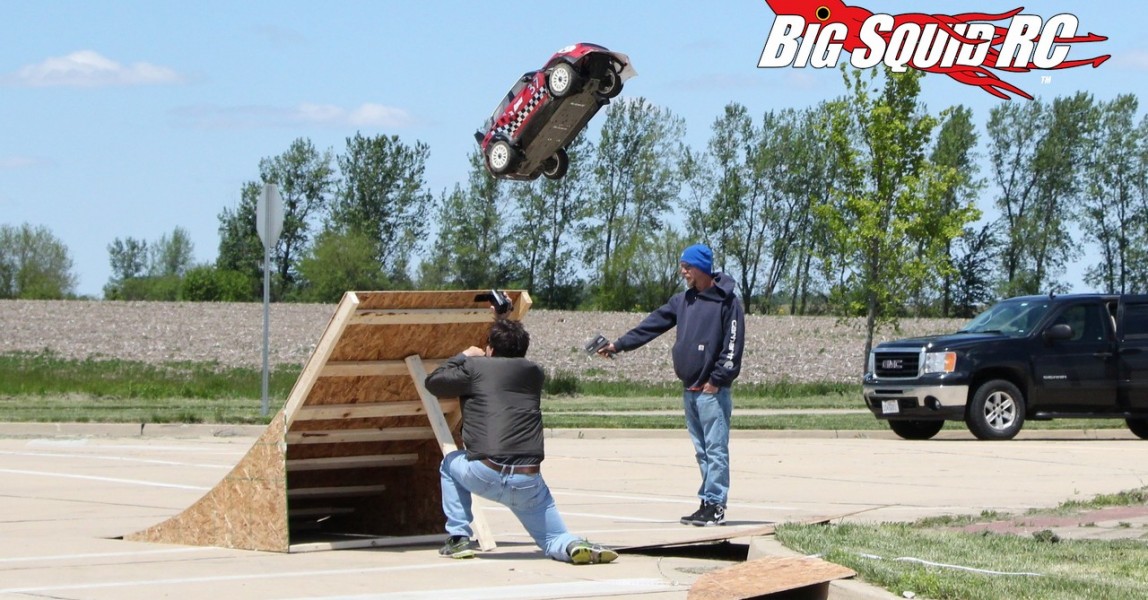 Last weekend in Champaign IL, the BigSquidRC Bash Crew held a special Long Jump Competition. Our Bash Crew gathered up a bunch of cars, a bunch of people, and met up at World famous Speed Run Road to go big and have a fun day of bashing.

The longest jump of the day was laid down by Paul Bludgen from Midlothian IL. Paul launched his Castle powered Losi 2.0 8th Scale Buggy a Record Shattering 262 Feet. Think about that for a moment. 262 feet is longer than a full scale 747 airplane. That is almost as long as jumping from the goal line on a football field and landing on the opposite 10 yard line. That is twice as far as most outdoor rc tracks are long. Paul’s record breaker ended up being a bit over 60 feet further than the previous record. In fact, Paul had a half dozen jumps over 230 feet, he just kept going longer all day. The entire BigSquidRC Bash Crew has to give Paul HUGE props for going bigger than anyone else ever has with an rc car, watching him jump was simply incredible.

In the 5th scale class, Editor in Chief Brian was fearlessly hucking a Losi Mini WRC. The gas powered Mini was able to leap 73 feet, which is pretty crazy for the type of vehicle it is. Craig Nelson and his 2028 Castle Powered Losi 5IVE-T were on another level. Craig pulled a complete backflip while managing a distance of 107 feet on his final pass. Our Bash Crew goes big on a daily basis, but even we were amazed to see Craig’s 5IVE-T fly right over the 100 foot mark. And in case you were wondering, the landings were absolutely bone crushing with the 5th scalers, but they held together quite well.

In the Mini/Micro class Tim Mohr was able land a 112 foot jump with a Losi Mini 8IGHT buggy. Once again it was Castle that supplied the insane power needed to jump that far, while a MaxAmps 3S LiPo supplied the juice.

All in all it was a great day of going huge and bashing hard. We need to give special thanks to Craig “The Ramp Builder” Nelson for building yet another fantastic ramp, and to Hawaiian Chris, Cubby, 3D Bill, and Brandon for all their help at the event. Editor Brian is working on a full video of the event, which should go up late this week or early next week. The video will include the record breaking jump as well as some of our other antics from the event.

Hit This Link for more event coverage on BigSquidRC.