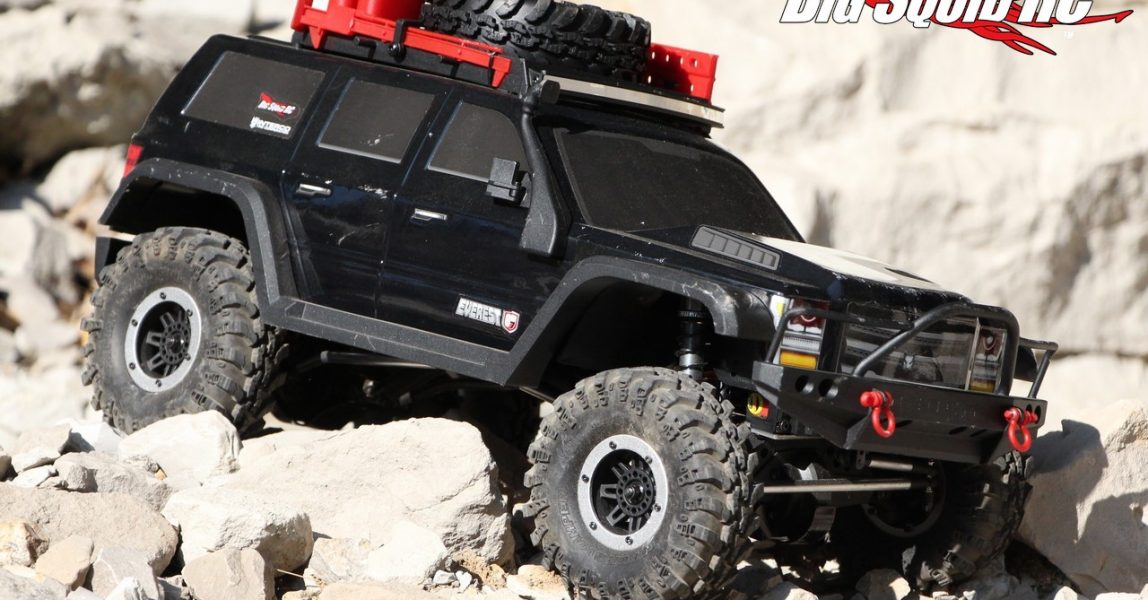 Redcat Racing shook the scale crawling world with their announcement of the Everest Gen7 Pro. The Gen7 Pro is loaded with scale details and the new platform promises serious trail/rock performance. With a low price point and tons of features, how does it stack up against some of the stiffest competition in the industry? Is it worth your hard earned cash? Keep on scrolling down to learn our thoughts on the Redcat Gen7 Pro scale crawler…

Front wheel travel (vertical only, axles level): 1.2″
Rear wheel travel (vertical only, axles level): 1.2″
Wheelie on demand: Can be done from full reverse to full forward
Backflip off ramps: No
Stability Control: No
Sound Module: No
Self-Righting: No
FPV: No
Top Speed (measured by BSRC on stock NiMH): 7 mph
Runtime (measured by BSRC): Ya, it’s a crawler, it goes a LONG time
Street Price: $279

Primary Competition: Oh yes, the Redcat is in a stacked class. The Pro goes up again the Vaterra Ascender, various RC4WD RTRs, the SCX10 II RTR, the HPI Venture FJ, as well as the Traxxas TRX-4.

What’s Needed To Complete: You’ll need four AA cells for the transmitter and that’s it. The truck comes with a NiMH pack and wall charger.

Build Quality: Out of the box our bash crew didn’t really find an assembly faults with the truck. The only thing we found was small, that was the pinion wasn’t quite centered on the spur gear. Otherwise, the mesh was good, the shocks were excellent, and we didn’t find any stripped or loose screws.

Test Venues: We used three different local parks to evaluate the Redcat. All three parks had plenty of rock sections, they offered plenty of trail driving, plus loads of grass and pavement.

Set-up Notes: Running trucks bone stock is how we do our reviews and that is how we did the Redcat. We didn’t change any suspension settings or anything else. For power we used MaxAmps AA cells in the transmitter along with a MaxAmps 2S LiPo. We also used the stock NiMH pack to power the truck from time to time. Our crew used a Dynamite Passport to handle all the charging duties.

Turning: The Redcat turns well when its servo has the power, but that isn’t always the case. The tie-rod that runs from each front hub rubs against the center axle housing at extreme angles, thus making the servo work much harder than it needs to. This results in weak steering, giving the truck a wide turning radius. The geometry on the truck seems solid for good turning, but the servo/tie-rod situation really holds it back. The wide turning radius hurts the Redcat on pavement, grass, and when rock crawling. No, it isn’t terrible in the corners, but fixing the tie-rod and adding a more powerful servo will instantly result in much improved steering.

Jumping: For a scale crawler, we thought the Gen7 Pro jumped extremely well. We felt like the shocks on the Redcat were arguably the best we’ve felt on a crawler. This allowed it to softly land from the small jumps that you encounter out on the trail.

Bumps/Whoops: Once again, those silky smooth shocks, with little binding in its suspension system, resulted in a top notch performance. The Redcat just seemed smoother to us in rough sections than other crawlers that we’ve tested. While some crawlers come stock with shocks that are far too stiff or have loads of stiction, the Recat is just buttery smooth.

On-Road: Nope, the Gen7 Pro was Never designed to be used on-road, but we put in a couple packs just to see how it handled. The Redcat seemed to have a couple mph higher top speed than some of the other crawlers we’ve reviewed, so it can go somewhat faster than a normal walking pace. It also had no problem popping wheelies when going from full reverse to full forward. On the downside, it did have a rather large turning radius.

Grass: Our bash crew found that the Redcat was a beast in grass. With soft tires, 4wd, and a power system that had plenty of wattage on tap, our truck never had an issue going where we asked it go. The Redcat just kept on going, even when grass neared the top of its hood.

Tires: The stock tires are very nice. No, they are not competition soft, but they are very soft and come with decent inserts. The fully licensed Super Swamper replicas have an outstanding look and did an excellent job of providing traction for the rig. It didn’t matter if it was mud, loamy topsoil, or pure rock face, for a RTR tire we thought they did a great job.

Power: The stock power system works well in the Gen7 Pro. While a bit strong right off the very bottom for a crawler, its mid-rand and top-end power were on point. No, it isn’t crazily overpowered like so many bash machines, what it packs is a nice soft power delivery with enough raw wattage to get out of pretty much any bind.

Radio: The included radio was decent for a RTR. Its ergonomics worked fine for the hands of all our test crew members, plus we liked how it had a drop down protective cover over all its adjustments. If you’ve ever been on a trail run and had a branch mess up your radio settings then you already know why that cover comes in handy. Range was solid, meaning we never ran the truck out of range during testing, and we never experienced a single glitch. On the downside of things, we felt the LED lights on the transmitter were a bit too bright for our tastes.

Broken Parts: Our test truck lead a tough life. After pack-after-pack of beating on it, we managed to break a rod end and burn out the servo. Not bad for the amount of abuse we put the truck through.

Oh ya, here we go with the famous miscellaneous notes. First up, those scale accessories on the roof. We expected to lose one, or all, of the items while driving, but they stayed rock solid. Btw, the spare is fully usable.

How about those side mirrors? It doesn’t get much more realistic than that, and they even conveniently fold in!

Is the Redcat top heavy? Of course it is, just like every other scale crawler with a tall body. We didn’t notice it being any more so than its competition, just don’t expect it to handle like a comp crawler when it is a SCALE crawler. For a scale crawler it rolled over about the amount that we expected it to.

Out of the box the drag brake is set fairly well. It isn’t super hard, but enough to keep the truck from rolling at most angles.

We are BIG fans of the way the body tilts back for maintenance. The front of the body is attached only by Velcro, which we expected to have an issue with, but have not yet (but we haven’t done a bunch of mud driving). The body pivots at the back, then has a prop bar to keep it open. This works incredibly well for quick changes of a battery pack.

The Redcat is a bit faster than most crawlers. It feels like it has slightly more top speed and has more than enough raw power to pull wheelies when going from full reverse to full forward.

The tow ball is chrome and usable. Nice touch!

With all the hard plastic pieces around the body, don’t expect to ruin it any time soon. Our truck flipped numerous times off big rock piles and the body is nearly in the same shape that we received it.

The upper suspension links rub against the center drive shafts. While it didn’t create a problem for us, it does rob the truck of a small amount of runtime.

While first inspecting the truck, we saw that the brass pinion didn’t quite line up with the spur. It isn’t that pinion was poorly installed, the problem is the pinion has too thick of a shoulder. This makes it impossible to get perfect alignment.

OK, so what was perhaps the most impressive part of the Redcat? Weight. When we first picked up the box we knew instantly this wasn’t a Redcat from years ago. The Gen7 Pro has good weight to it, just like a hobby grade rc should have. The truck has plenty of real metal parts, including the chassis, axle protectors, shocks, and even wheel hexes.

We were big fans of the battery tray on the Redcat. It is sturdy, it is mounted low towards the front of the truck, and its Velcro fasteners make it ridiculously fast to change out a battery pack.

No body clips anywhere to be found on the Gen7 Pro! Huge props for that Redcat!

We were also big fans of the inner fenders on the Gen7 Pro. They help keep dirt out of the inner chassis and also add a nice touch of realism to the truck.

We were not fans of the stock connectors. Deans, or even Tamiya, would have been preferred.

Stickers. Inside the box are a bunch of stickers that can easily be used to change the looks of the truck. From wood grain, to red, to white accents, it couldn’t be easier to completely change the look of the rig. Very nice!

Best Mod: Like most RTR crawlers, the Redcat could use more beef behind the servo. The very first thing we’re going to do to our test rig is put in a big Hitec servo and separate BEC.

Time To Bash: B We had no issues getting the truck set-up and running. We charged up the stock pack, popped four cells into the transmitter, then started getting our bash on.

Workability: B We found it easy to wrench on the Redcat. The stock hardware seemed to be of a decent quality and the layout on the truck was nice and open.

Car Show Rating: A Our review crew really liked the looks of the Gen7 Pro. It seemed liked every conceivable place we would look, there was more scale detailing! This is hands down the best looking Redcat ever and it stacks up well against its competition. Inner fenders, stylish wheels/tires, a decent looking body, plus all the little details make the Redcat one sharp rig.

Bash-A-Bility: B We had very few issues with our test rig. We drove it hard, we bound it up in the rocks, and we still managed to break very few parts.

Fun Factor: B We had a lot of fun while testing the Redcat. From long trails to impossible rock sections, the Redcat just kept on putting a smile on our face.

Handling: B For a scale crawler the Redcat did a solid job out on the trail, with turning radius being its biggest hold back.

Value: A All this scale crawler for just $279? Yes, we felt like the Redcat was an outstanding value.

Parts Availability: N/A The Redcat is so new that we were not able to research parts availability. Most hobby shops have not gotten the truck in stock yet, let alone spare parts.

BigSquid Rating: B+ The new Redcat is not messing around. Their Gen7 Pro scale crawler is legit, and more importantly, is perhaps the best truck Redcat has ever let loose on the public. We are big fans and can highly recommend it to all you scale crawling fanatics.