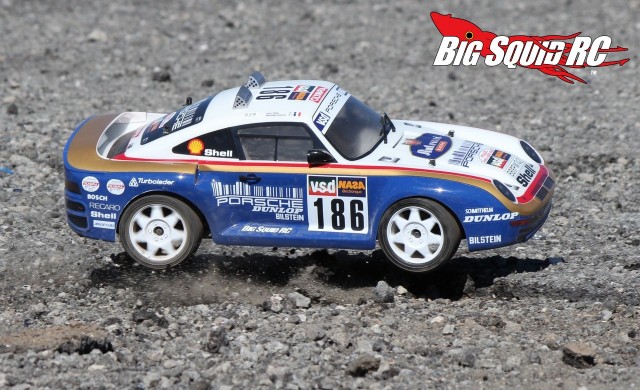 The bash world has been abuzz since news broke that Carisma was hitting the states, and at the front of that buzz was one car in particular, the Porsche 959 Rally. We got our hands on one and have been driving it like we stole for a few weeks now. To boil it down- is the Carisma Porsche a solid bash machine that is worth your hard earned cash? Click the “Read More” to find out…

Primary Competition: Other rally cars like the HPI WR8 Flux and Traxxas 1/10 Rally.

What’s Needed To Complete: It comes with four AA cells for the transmitter, all you need is a pack for the car and a charger.

Build Quality: We didn’t find any issues with how the car was built. Everything was in proper order- proper oil was in the shocks, we didn’t find any binding, and the pinion/spur mesh was spot on.

Set-up Notes: We ran the car bone stock. For power we used a TrakPower 2S 6800mAh LiPo and a TrakPower VR-1 handled the charging duties.

Turning: The Carisma was very predictable and easy to drive in corners. Turn-in was typically solid, and with its 3 differentials, you could really pound the gas at the apex and shoot out of a corner. One thing the Carisma didn’t like was turning in a small radius. The stock servo arm was slightly too short, this didn’t allow the front tires to reach their maximum throw.

Jumping: Consider the Porsche is basically an on-road car, it jumped relatively well. The short suspension travel, long overhangs, and relatively low top end held back its jumping ability, but it still jumped much better than expected. Small to medium sized jumps are not out of question, and while the car blows immediately through its suspension when landing, the chassis is tough enough to take the punishment.

Bumps/Whoops: Considering it’s a low slung rally type car, the Porsche held its down. No, it can’t handle bumps like a dedicated off-roader can, but you can pretty much slam through rough areas without losing much speed or getting too far out of control.

On-Road: Finally we make it to the Porsche’s forte, on-road. The 959 is pretty much an animal on pavement. It has more than enough power to get around a parking lot quickly, and it soaks up small rocks and road joints without issue. More importantly, it loves being driven hard. The harder you drive it the better it tends to respond, and its chassis gives you plenty of fair warning when you are reaching the edge of cohesion.

Grass: With stock tires the 959 doesn’t get around well in grass. It has the power, it has 4wd, but the street tread tires simply spin in the green stuff. If you plan on driving the Porsche in grass, absolutely plan on changing out the tires.

Tires: The stock street treads work well on pavement. They are molded from a medium compound, which offers decent grip and reasonable life. The stock inserts are a bit on the soft side, but worked fine for us.

Power: While the Porsche comes with a brushless power system, it isn’t crazy fast. It certainly has good low-end power and a decent mid-range, but it is geared conservatively. The car tops out at 26 mph on the top end, which will feel plenty of fast to noobs and is more than enough speed for small areas, but there is a lot more power to be had by gearing up. On the upside, the conservative gearing does help keep motor temps down and gives the Carisma a ridiculously long 29 minute runtime.

Radio: The 2.4GHz radio system worked well for us, it had long range and never glitched. The general ergonomics of the transmitter were fine, but we would rather see a foam covered wheel instead of just plastic, and the trigger recesses into the grip at WFO, something that some testers never noticed, but drove others insane.

Broken Parts: Straight up, we beat the Porsche like a rented mule from day one and we broke very few parts. Early on during the review a screw fell out of the front hub carrier, and it kept falling out, but that wasn’t caused by a hit, it was stripped out during assembly. Also, the body cracked earlier than expected from small hits. The body was molded from thinner polycarbonate than we would liked to have seen. As far as breakage from actual torture testing, the Porsche held up like a champ. We went huge off big wood ramps, slammed it full speed into railroad ties and slabs of pavement, with zero broken parts. Seriously, after dozens of full speed slams into solid objects, we had broken no parts. Finally, we were able to rip a shock shaft out of the shock end and tweak the rear two body mounts, but considering the beating we put on the Porsche, it held up like a champ.

The Carisma comes stock with HT60 connectors. We’ve never tested them, so we can’t really say if they are good or bad. We didn’t cut off the stock connector, instead we made an adapter to our preferred Traxxas units. On the upside, the Porsche comes with spare connectors, making it easy to make up an adapter or to start the transition over to the HT60s.

Some people just don’t like the looks of a Porsche 959, but even those who don’t still marveled at how detailed and how good looking the Carisma was. I don’t know if we’ve ever tested a car that could stop people dead in their tracks like the Porsche did.

The battery tray is set-up to hold packs on their sides, this makes using different sized packs a pain.

The Carisma continues the trend of using small body clips. I can kinda see the point on the Porsche, as large pins would detract from its ultra-scale looks, but still, those small pins are a PITA to use on a daily basis.

We put the Carisma to some serious water testing and it never missed a beat. Feel free to dive straight into the nearest mud hole instead of avoiding it.

We realize that not everyone reads our daily news, so for those of you who don’t, Carisma is available here in the states via Falcon Hobby Supply.

During day in and day out use, the Carisma fired right up. It did what a good bash machine should do- simply work without complaint.

Best Mod Over $5: If you plan on running in grass and dirt, more aggressive aftermarket tires.

Time To Bash: B The Carisma takes very little set-up to get going. Put the supplied AA cells in the transmitter, put a charged pack in the car, then you are ready to bash.

Workability: B A common layout is used on the Porsche making it easy to wrench on. However, we would much rather have seen hex hardware used instead of the supplied Phillips screws.

Car Show Rating: A The Carisma is arguably the best looking car we’ve ever reviewed. From its realistic windshield wipers and door handles to its immaculate paint and stickering, it sets the bar really, really, high for other companies to shoot for.

Bash-A-Bility: B Yes, we did manage to break the Carisma, but it took some serious abuse to do so. Overall it is one tough car.

Fun Factor: B The Carisma is a blast drifting, spinning, and jumping on pavement.

Handling: B The Porsche drives as well, or better, than the other rally cars we have tested.

Value: A Affordable price, hard to break, and gorgeous looks put the Carisma on top of this category.

Parts Availability: D While parts are available, there simply aren’t many different places to get them from.

BigSquid Rating: B The Carisma Porsche 959 is affordable, tough, and one of the best looking cars that money can buy. We highly recommend the Carisma 959 to you.

Check out the video below of some of the torture testing we did to this vehicle!