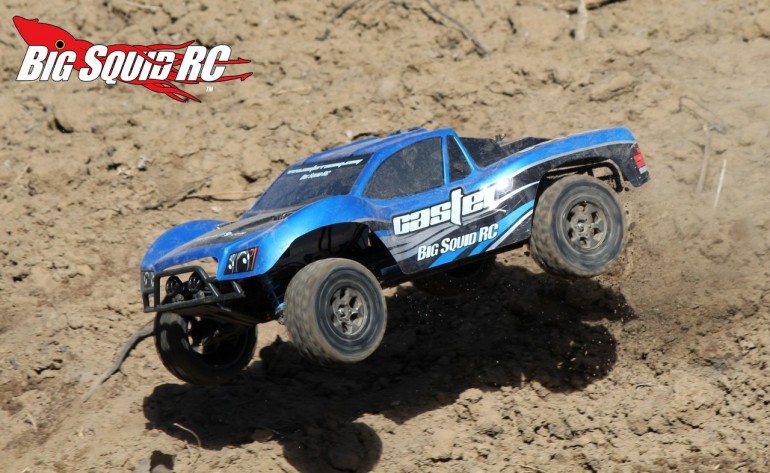 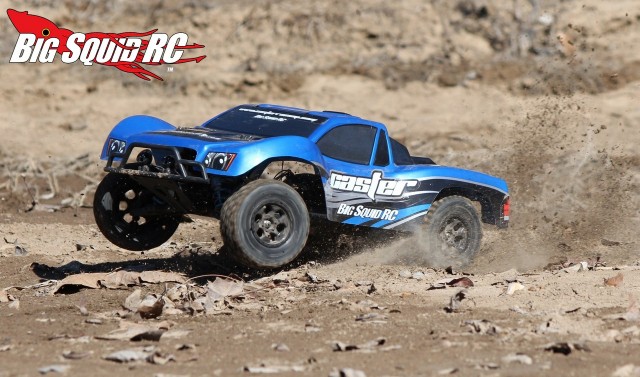 Is there a hotter product category than 4wd short course trucks? Now days it seems like everybody is driving one. The folks over at Caster Racing shot us one of their E-Ultra SCT10 4wd short course trucks to see how we thought it stacked up to the competition. No doubt there are some serious heavy hitters in the class, how does the Caster compare? Hit the “Read More” to find out…

What’s Needed To Complete: Four AA batteries for the transmitter, a battery for truck and a charger.

Build Quality: The SCT10 was generally well assembled except for the following areas. The pinion/spur mesh was spot on, however the pinion was too far out on the shaft causing the spur to grind against the pinion’s grub screw. Also, the rear bumper was missing a screw in the top center, and the screws in the battery tray needed to be loosened before the battery bar had enough height to fit in a LiPo pack. Nothing major, but stuff to watch for.

Set-up Notes: The Caster came stock with a Deans connector so we just had to add batteries and stickers before we pulled trigger. For juice we used a MaxAmps 2S 4200mAh LiPo and a TrakPower VR-1 handled the charging duties.

Turning: The SCT10 has a lot of steering, so much that it was a bit difficult to drive on some surfaces. You would turn the wheels to steer and the truck would turn too much, then the rear would try to swing around and pass the front. This made the truck a bit frustrating to drive so we firmed up the front suspension and softened the rear. Once that was done the Caster was more neutral in corners.

Jumping: The SCT10 uses a center diff, combine that with its 4wd system and you end up with an easy to jump truck. It tended to jump slightly nose down, which on an SCT can be a good thing to help keep wind from getting under the body and producing the dreaded parachute effect. The power system had enough juice for mid-air corrections, making it easy to level out the truck mid-air. Landings were absorbed well, but the truck was not a fan of landing too far sideways. Land it straight to keep it on 4 wheels.

Bumps/Whoops: Rough sections are navigated quite well by the Caster. The stock damping and spring rates are about spot-on for blasting through the gnarlies.

On-Road: With stock settings the oversteer made it a handful on pavement, but once the suspension was changed it got around quite well on pavement. It typically took a rut or road joint to cause the SCT10 to traction roll, and it soaked up pot holes and bumps quite well.

Grass: The Caster gets around in grass about the same as the other 4wd SCTs in its class. The SCT10’s scale appropriate tires worked well in short grass, but because of its LCG design, taller grass presented a challenge.

Tires: The stock meats are hard, some of the hardest we’ve tested. The hard compound, combined with their scale type tread, lend to extremely long wearing tires. Heck, we didn’t notice any wear even after multiple packs of pavement driving. The downside of course is raw traction, they simply don’t have the mechanical grip of a softer shoe.

Power: We only ran the SCT10 on 2S LiPo and found the power to be strong, but somewhat sedate for a brushless system. This isn’t neccessarily a bad thing as too much power makes it hard to drive for noobs. We didn’t try it, but throwing on some taller gearing (or a higher cell count) would likely turn the Caster into a power monster for more experienced drivers. Off the bottom end the power is soft, manageable, and perhaps one of the smoothest non-sensored systems we’ve tried, the mid-range was strong yet manageable, with decent power on top that ran out of breathe a bit earlier than we expected. Overall, the power was there, more than enough to make the doubles at our local track, and it came on exceptionally smoothly. I have to also note that the Caster/Hobbywing combo had the smoothest, easiest to use reverse of perhaps any system we’ve driven, and we experienced absolutely no cogging.

Radio: The stock transmitter is a basic RTR unit that had good range and we experienced zero glitching issues. The foam covered wheel felt decent, but the heavy ribbing and straight rear part of the trigger put off some of our testers.

Broken Parts: Up front I have to say that we never drove the Caster in temps over 45 degrees Fahrenheit. Some vehicles don’t have a problem with cold temps, on others their plastic can become brittle. We did break some parts but never had a chance to test it in warm weather to find out if it was just a temperature thing. With that said…

The SCT10 made it through the normal part of our testing without any breakage. The “normal” part is just that, driving it like normal at the track and doing normal bashing (ok, so our “normal” might be a little more extreme than others… LOL). Because it survived the “normal” testing, of course it was time to up the ante so we started jumping it off a decent size vert ramp to pavement (in 28 degree weather). We landed sideways on one of the jumps and broke a ballstud out of the rear shock tower. We cobbled it back together then it was time for some serious abuse, a two story roof jump. On the first jump it landed nose down, breaking a front steering block. We cobbled that back together for one more two story huck and ended up casing the landing on a railroad tie, cracking the rear of the chassis and top deck.

In an age where everyone seems to ship their RTRs with PITA small body clips the Caster clips were decent sized (and angled to boot!). Body clips get constant use so its truly nice when they work well and are easy on the fingertips.

The stock foams were lumpy inside the tires resulting in some pretty unbalanced wheels.

The SCT10 is an RTR, but you’ll need to apply stickers if you want it to look like the box cover. This isn’t a big deal, but it does take a few minutes and doesn’t have to be done on most other RTRs.

The Caster comes with working lights up front! We didn’t have any issues with them working, although they did pop out from time to time.

A Deans plug comes standard and that rocks. Deans is a good quality plug that doesn’t need to be replaced.

Sway bars are standard front and rear, which in this particular type of truck typically work well.

The Caster uses a full top deck. A full top deck makes the chassis ultra stiff, which we prefer to have. We would rather replace top deck pieces than un-taco a chassis.

Best Mod Under $5: Raise the front ride height, install 50 weight AE in the front, and softening up the rear costs very little and makes the truck much better in the corners.

Best Mod Over $5: This is an easy one, a full set of Pro-Line tires for better grip on pretty much every surface.

Time To Bash: C Slap on some stickers, charge up a pack, then let the bashing begin.

Workability: B The SCT10 uses a common layout that is easy to wrench on when needed.

Car Show Rating: C The graphics are sharp and we really liked the looks of the wheels/tires, but some of the bash crew weren’t fans of the shape of the body.

Bash-A-Bility: B The Caster cruised through our normal testing without issue but broke some parts when we got extreme (albeit in quite cold temperatures).

Fun Factor: C We had a good time wheeling the SCT10, but its soft power left us wanting a bit more.

Handling: C The Caster drives decent but a better set-up out of the box would have resulted in a better score.

Parts Availability: D We looked up some of the parts we broke and found them in stock, but from a very limited source. A wider distribution network would definitely result in a better score here.

BigSquid Rating: C We had a good time bashing the daylights out of the Caster SCT10 and found it to be a solid overall truck at a reasonable price point. As is, against a field of outstanding trucks, it gets a “C” grade. However, with a few minor changes, the SCT10 could be right up there with the best in its class. If you are looking for something different, don’t let that score scare you.