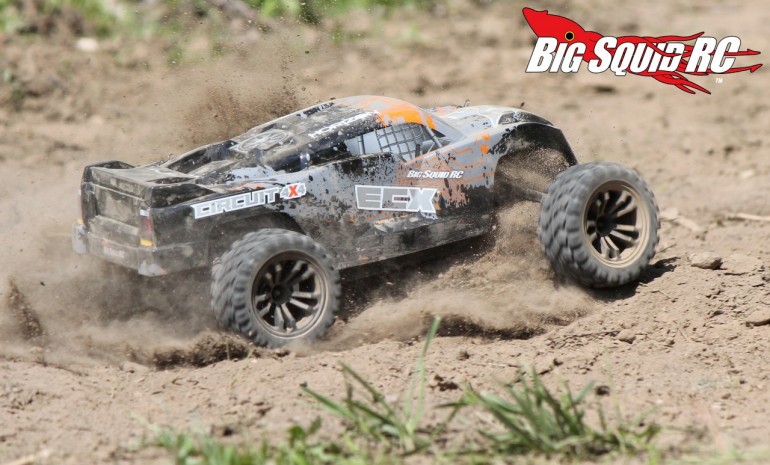 Myself, like many of you, spent years driving 2wd Stadium Trucks. They were a whole lot easier to drive and bash with compared to a typical 2wd buggy. A 4wd stadium truck would have been even better, but there were very few available, and those that were tended to break all the time.

ECX recently released their all wheel drive stadium truck, the ready to run 4wd Circuit. Does the Circuit make a good basher? Can it get around the track? Does it have enough power to be fun? And most importantly, is it worth your hard earned cash? Find out by hitting the “Read More” button below…

Primary Competition: There aren’t many 4WD stadium trucks out there on the market, so for competition you would be comparing it to other 1/10th scale 4wd off-road machines intended for bashing.

What’s Needed To Complete: Not a dern thing, absolutely everything you need to get going is inside the box.

Set-up Notes: We ran the Circuit bone stock with the exception of ditching the included EC3 connector in favor of a Traxxas unit. We don’t really have a problem with an EC3 in this application, it’s just every pack we have is already wired for TRX and we didn’t want to use an adapter. Also, we didn’t use the included wall charger, instead we used a Racers Edge EZ80 to handle the charging duties. Lastly, while we used the included 6 cell NiMH pack for about 75% of testing, we eventually enlisted a Dynamite Reaction 2S 7.4V 30C 5000mAh LiPo for more yank.

Turning: The Circuit generally had some oversteer, and the higher the traction of surface you drove on, the worse it was. And this wasn’t the “good” type of oversteer where the front end just always felt planted, it was the type that made the truck hard to drive. This can be dialed out by suspension and tires changes, but right out of the box we found it steered too much, and the rear was too loose.

Jumping: We found airtime with the Circuit to be quite fun. It tended to launch straight, and a light tap of the brakes immediately brought the nose down. The suspension worked well upon landing, but the motor didn’t have enough rpm to bring the nose up during endos.

Bumps/Whoops: While the Circuit made it though rough spots reasonably well, it would occasionally drop its nose when pounding whoops at higher speeds. The suspension was reasonably damped for soaking up whoops and chop.

On-Road: The Circuit was a bit hard to drive on pavement due to its oversteer. Now this is fairly easily fixed by stiffening up the front suspension, but right out of the box it was difficult to keep it going in a straight line.

Grass: Short grass is no issue with the Circuit, but as it got taller its low power output and stock tires didn’t do it any favors. If you plan on doing much grass driving- plan on investing in new tires and a LiPo battery.

Tires: The tires have a nice looking scale tread design, but only work well on pavement. They didn’t provide much traction on dirt, or on grass.

Power: Is it fast? No, it is not. The main culprit is the included 6 cell NiMH battery. When using the stock pack the Circuit is very soft off the bottom, has mild yank in the mid-range, and falls off fast up top. Various testers agreed that this is perfect power for noobs, and our noob tester felt it had enough yank to be fun. For our more experienced testers, we ended up running a LiPo battery later in testing. The LiPo instantly gave the Circuit much more power, enough to make reasonably large sized jumps, shoot a decent size roost, and to generally keep a smile on our testers faces. Seriously, a simple battery change turns the truck from ho-hum to very fun (for more experienced drivers).

Radio: The included radio is a Spektrum DX2E which is also used in a number of Horizon ready to runs. Our test unit had good range, decent ergonomics, and was generally a good radio that won’t need immediate replacement. The unit really only has two things that bugs our testers- a light trigger spring and a plastic wheel that should be covered in foam.

Broken Parts: Surprisingly our test Circuit broke super early on, like during the first 5 minutes of driving while we were still taking pictures. We broke a front CVD at the coupler while doing simple donuts on a dirt track. We borrowed a CVD from our previously reviewed ECX Torment 4WD and were back up and running. After that we drove the Circuit like it owed us money and didn’t break another part.

The included servo is both slow and weak, more so than on most RTRs.

The Circuit can double as a submarine, we subjected ours to some serious water testing with no ill effects.

While other models in the ECX line-up got 7 cell NiMH packs, the Circuit only got a 6 cell. We tried putting in a 7 cell pack, but the battery tray was about a half inch too short.

Body clips get used all the time by a truck owner, luckily the Circuit came with a decent set.

The included battery is rated for 2400mAh of capacity and ours tested out right around 2400.

We did a lot of track driving with the Circuit (on LiPo) and had a blast with it. Given more power and race tires, we feel it could bust out some fast lap times.

Sometimes the Circuit would go right in to reverse, other times you could stab the trigger a half dozen times and it would just sit there.

We liked the Mod 1 spur/pinion on the Circuit, we tried hard to strip out the spur and could not make it happen.

Best Mod Under $5: For a low buck mod we’d recommend tossing some thicker oil into the front shocks, as well as rising its ride height a bit. We performed this on our test unit and it immediately made the truck more drivable.

Best Mod Over $5: Want more power? Investing in a LiPo will instantly perk the truck up. A good servo comes in a close second.

Time To Bash: B The ECX comes with everything you need in the box and is generally quick to get going.

Workability: B We did very little wrenching on our test unit, but what little we did was quite easy. Hex headed hardware would have given the Circuit an “A” in this category.

Car Show Rating: A What kind of look is the Circuit? It’s not really racer, not really basher, but whatever it is, the majority of our testers really liked it. The graphics are super crisp and tasteful, everyone really liked the looks of the wheels and tires, and our testers thought the shape of the body had a nice look to it.

Bash-A-Bility: C Our test truck snapped a front CVD very early in testing, after that, we didn’t break anything.

Fun Factor: C The fun factor is a “C” with the included pack, it is much higher when driven on LiPo.

Handling: C A bit of over-steer and tires that don’t get much traction on dirt or grass hurt its score here.

Value: B The ECX is a decent 4wd RTR stadium truck at a very reasonable price point.

Parts Availability: C You won’t find ECX parts hanging off the pegs of every hobby shop, but they are readily available from multiple sources on-line.