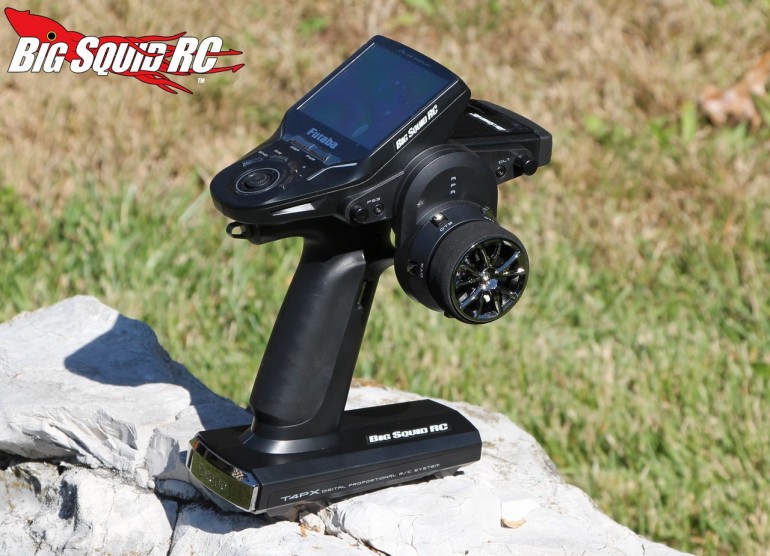 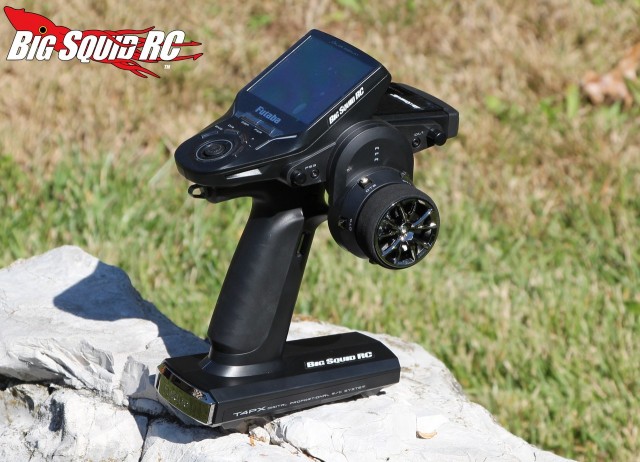 Futaba has long been known to make some of the best transmitters that money can buy. Their latest top-of-the-line transmitter, the 4PX, comes with copious amounts of features, faster speed, a high-zoot screen and telemetry. Is the Futaba 4PX the best radio on the market? Click the “Read more” to find out…

Review By: Cubby
Pics By: T-Money

Build Quality- The feel and the finish of the 4PX was top notch with one exception, ours had a slight rattling sound. The sound turned out to be loose fitting trim buttons and could only be heard when jostling the transmitter around.

Set-up Notes- We installed the drop down wheel pronto. For batteries, we used both Alkaline and a Hobbico 1900 LiFe pack. For servos we used Hitec, Savox, and Futaba digital units. We also used the 4PX to control a wide variety of vehicles from an Axial Yeti XL, to the Pro-Line PRO-MT, to the Tower Hobbies Cutback SCT (among others).

Feel In Hand- We had some disparity between our testers. Those used to the feel of the older 4PK Super-R didn’t like the thicker grip and larger trigger of the 4PX. But… some of our testers preferred the thicker handle and larger trigger. All of our reviewers liked the lighter weight of the 4PX and the dual stage wheel foam. Some of our reviewers felt the 4PX was slightly top heavy, while other felt it was perfectly balanced. We must also mention that all our testers thought the spring rates on both the wheel and trigger were perfect. Overall- the 4PX has a modern, high quality feel with excellent ergonomics.

Ease of Use- Are the new menus easier to use than the ones from the older 3/4PK? Yes they are. When we handed the 4PX off to fellow bashers to see if they could reverse the steering servo or change models they could typically do it faster than on previous models.

Features- Ya… too many to list that’s for sure. Also for sure, we didn’t use that many of them. We used the typical stuff used to get a truck set-up properly, but not much more. While we didn’t use them, the 4PX is loaded with features for all you guys out there that do special applications. If you can’t get the 4PX to do what you want, good luck finding another radio that will.

Glitching- Zero, nada, ziltch. We didn’t suffer one glitch while using the 4PX.

Driving Performance- From doing previous transmitter shootouts we know for a fact that different radios can drive much differently from each other. While we were not able to drive the 4PX back-to-back with its primary competition, we know from driving as much as we do just how well the 4PX works, which is incredibly well. Steering was instantaneous and superbly linear, likewise for the throttle. Some of our testers felt as if they could actually feel the difference in speed between the 4PX and their current radio, as if they would turn-in too early on well know corners with the Futaba because of its speed. To boil it down, the 4PX naturally translated what our brains/fingers wanted the car to do.

Radio Range- Ok, we are truly getting lazy around the BSRC offices, especially when it comes to checking range on Futaba radio systems. We turned around at 1000 feet, it has more than you’ll use in any typical bashing application.

Durability Testing- You have no idea how truly hard it is for us to beat and bang on a brand new top-of-the-line radio (LOL). So yes, we dropped the 4PX from head height (about 5′) to concrete, not once, but three times, without breakage. Heck, the 4PX didn’t even spit out its batteries like most transmitters do. Remember, we dropped it so you don’t have to, you can be confident that if it does accidentally get knocked off your tailgate that it will still work afterwards.

Previous high-end Futaba radios came with a rechargeable battery and charger, the 4PX does not.

Out of the box the 4PX is set-up for Lithium batteries. We installed Alkaline and within a couple of minutes the 4PX started beeping and vibrating like mad (showing low battery). Moral of the story is, take the time to set your battery type the first time you use it.

We would have liked to have seen serration on the throttle side of the trigger. Now we have to use a hobby knife to roughen up the surface.

While we didn’t measure it, we seemed to get shorter battery life on the 4PX than on previous units.

If you loved the feel of the 4PK Super R, you will want to test fit the 4PX to your hands. A thinner grip is coming soon for the 4PX that will make it feel closer to the old 4PK series, but you might have to resort to fuel tubing on the trigger to get a tighter feel.

Everyone really liked the lighter weight of the 4PX.

The 4PX has a small antenna that you can rotate for longer range. We liked the fact that it is pretty much impossible to break the “antenna”, it is thick and heavy duty compared to most, and doesn’t stick out at all if you don’t rotate it.

We really liked the paper manual of the 4PX. We hate digital manuals (like the one from KO KIY) and really liked how informative and well written the 164 page 4PX manual is.

Our pictures do not do the screen on the 4PX justice, it is a stunner in person and makes every other radio seem 20 years old.

To protect that elegant screen the 4PX comes with a screen saver.

Maybe you’ve noticed, maybe not, but there is a large button on the back of the base of the 4PX (aka belly button). You can tap of the bottom of the unit against your chest (belly) to activate it. This is a great idea that works well in the real world.

Time To Bash: A We really liked the new menu and the receiver came pre-bound.

Car Show Rating: A Best looking radio you can buy? Our testers thought so.

Bash-A-Bility: A Even after more than a few purposeful drops our 4PX works like new.

Range: A Like other high-end Futaba products the 4PX delivers incredible range.

Value: C It took several long discussions among the BSRC Bash Crew to come up with this score. Some testers argued that because of its performance the 4PX was worth well over its sticker price. Other testers stated that its little brother the Futaba 4PLS does everything a basher needs with similar performance at half the price. In the end we settled on a C

Big Squid Rating: A- The addition of telemetry and even faster speed are nice upsides, while its incredible looking screen is second to none. We found the 4PX to be the best driving radio we’ve ever tested. If you are looking for the best radio money can buy the Futaba 4PX should be at the top of your list.