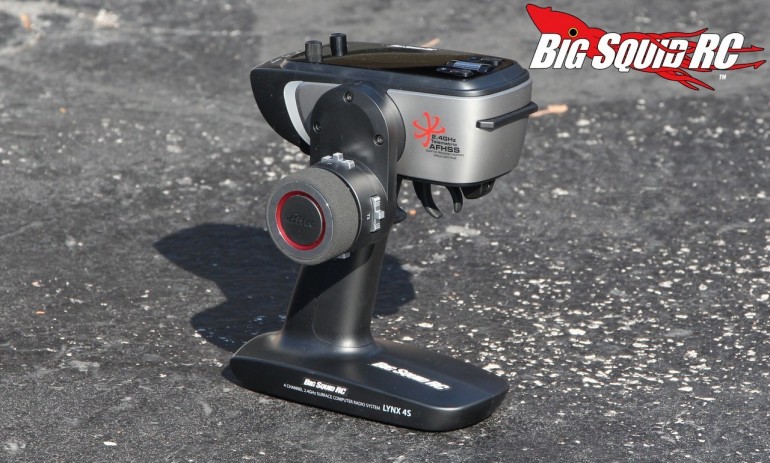 It’s been a long time since Hitec put out a high-end surface radio, that is why a whole lot of people in the rc world were stoked at the announcement of the new Lynx 4S. The Lynx 4S was touted to be the best surface radio Hitec has ever produced and comes with features like telemetry, a drop down wheel, and the ability to be set-up left or right handed. Is the Lynx 4S truly a high-end radio or does it fall short?

What’s In The Box- Our test sample was a pre-production unit so ours did not come with box, or even a manual for that matter. We can assure you that production units will be dialed with a proper box/manual/etc.

Build Quality- After going over the transmitter and both of the receivers that came with our test unit we didn’t find any build quality issues.

Feel In Hand- Lets face it here folks, when you pay big cash for a high-end transmitter you want it to have a high-buck feel. The Lynx 4S does that in spades.

While not the heaviest transmitter on the market, it has enough weight to feel high end. Also adding to the high-end feeling is arguably the best trigger on the market. The trigger isn’t too tight, nor is it too loose, it is shaped perfectly for a wide variety of fingers and comes with a light rubber coating to give your finger more traction. The rubber coating isn’t sticky, it’s more of a light coat that works extremely well. The 4S also comes with a drop down feel which all of our testers prefer, and the stock foam on the wheel was very high quality, albeit a bit on the soft side. The grip area uses a rubber inlay in the area between your thumb and index finger, as well as another inlay that covers most of the front side of the grip. Also speaking of the grip, it isn’t too skinny, nor too fat, once again it is fairly middle-of-the-road that appeals to a wide variety of hands. Also of note, the grip/trigger/wheel relationship was spot on, kudos to the ergonomic guys over at Hitec, they hit the nail on the head.

Overall our testers loved how the 4S felt in hand. Previous Hitec surface radios had a bit of cheap feel to them, but that certainly isn’t the case with the Lynx 4S, it feels as good in hand as some radios costing twice as much.

Ease of Use- Because our test unit wasn’t a full production unit we didn’t have the luxury of a manual to fall back on. While the menus were a bit different than what we were used to, all of our guys quickly adjusted and were able to perform regular functions without issue.

Features- Ummmmmm ya, if we tested each and every feature of the Lynx 4S our review wouldn’t be done for another 6 months. On the spec sheet it comes with nearly all the high-zoot features that most hobbyists use, but in our testing we used base set-ups. We didn’t get a chance to test out the telemetry or even the ability to use a Micro SD card to listen to music with.

Glitching- Our Bash Crew hates antennas sticking up out of the body so all our testing was done (even range testing) with the receiver antennas tucked down next to the chassis. And no, we never experienced a single glitch during all our testing.

Driving Performance- The first thing you’ll notice when driving the Lynx 4S is its tight dead band. The slightest input results in motion. You’ll also notice some serious speed, there is simply veryyyy little delay between an input and the action taking place in your truck. We found the throttle to be quite linear, not soft off the bottom like some other radios. We found the steering to be the same way, it was not soft near center, instead it was more linear across the entire stroke.

Radio Range- We hate testing range, especially this time of year where the temps averaged around 35 degrees F. Needless to say the Lynx 4S gave us several long, cold walks to step off distance. We never did drive it so far that we drove out of range, we basically ran out of room at our test venues before the Hitec ran out of range. We stepped off nearly a 1000 feet radius on one test, our test truck was a speck on the horizon but was still in full control.

Durability Testing- You have to love the BSRC Bash Crew, our durability testing started on accident within minutes of getting the transmitter. Greasy handed Iron Mike accidentally dropped the Lynx 4S to concrete while give it his first once over, resulting in one of the nasty sounding “SMACK….. OMG!!!” moments, but nothing broke. Over the course of testing we dropped it a few more times (on purpose) and the Lynx still performs as well today as when we received it.

The screen looks very much like the screen in the Futaba 4PK but tilted on its side.

The wheel drop down came in the box and only took about 5 minutes to install. It also looks very much like it came off a 4PK.

Some of our testers loved the look of the wheel, while others weren’t such big fans.

While we found binding very easy, just don’t try to do it in “display mode” instead of “transmit mode” like our Iron Mike did. No, it won’t bind when its not transmitting a signal (Mike!!). LOL

The large lights on either side of the transmitter can be easily changed in color to suit your mood (or your wardrobe).

Some of our testers liked how you had to tilt the radio on its side to see the display, while others were not big fans.

The roller switch used to scroll through the menus isn’t as precise as it should have been. Yes, it works ok, but could be improved upon.

A big factor in buying a new transmitter can be the cost of additional receivers. Just FYI, the Hitec Axion 2 channel receivers go for a paltry $39.

Much of our testing took place in cold weather, cold enough where we had to wear gloves. Thankfully the ergonomics felt find with gloves on.

Time To Bash: B Charge up the included NiMH and hit the bash spot. We found the menus easy to get accustomed to.

Car Show Rating: B Our testers were split about looks on the Lynx 4S, some loved how it looked while others thought it simply looked ok.

Bash-A-Bility: A Our Lynx 4S took numerous drops without any issues.

Range: A The Hitec proved to have outstanding range. Its range is so long that your eyesight becomes the limiting factor.

Value: A The Lynx 4S is a great value. It has top notch ergonomics and great feel while driving at a surprisingly low price point.

Big Squid Rating: A- The Lynx 4S is the best surface radio Hitec has ever made and arguably the best you can buy for under $300 (shootout anyone?). We were very impressed with the Lynx 4S (in nearly every category) and can highly recommend it to you.