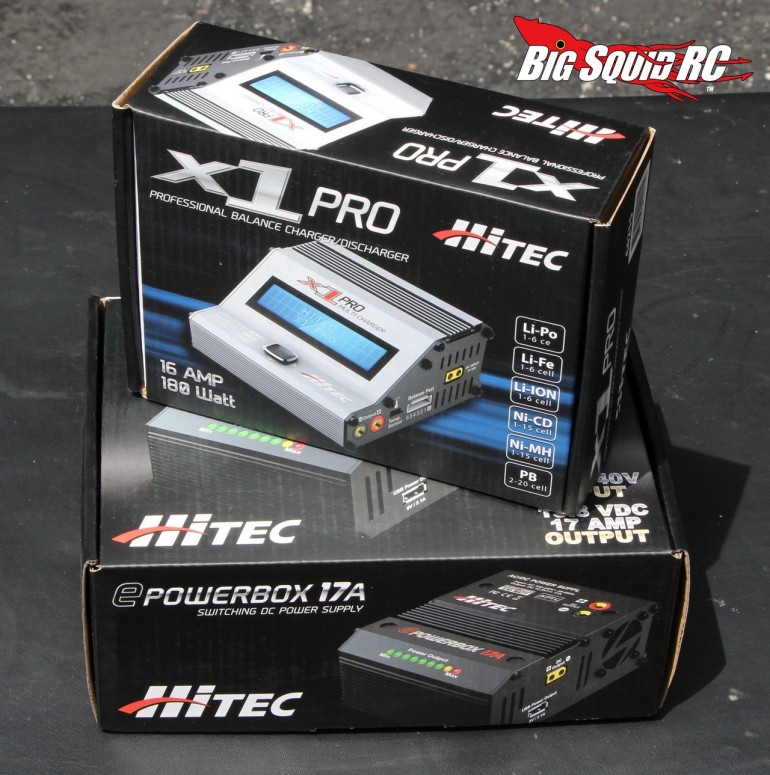 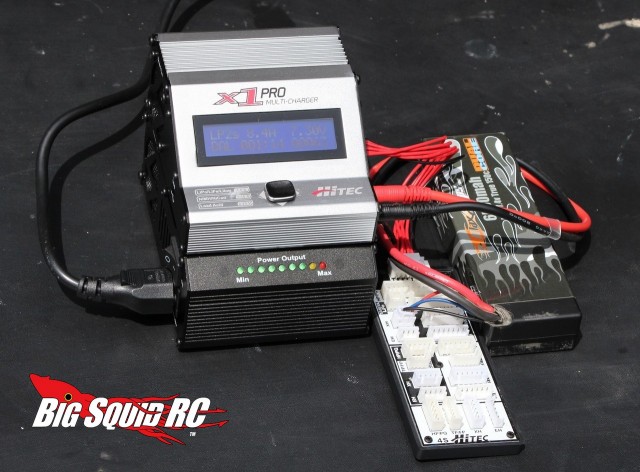 The latest battery charger from Hitec is the X1 Pro. As its name suggests, it is a professional level charger that is tiny in size and comes at an affordable price point. Can it hang with the best chargers on the planet? Is it easy to use? Is it worth the cash? Click the “Read More” tab to find out how performed in the field and on our test bench.

Build Quality: We liked what we saw with the X1 Pro. It features an all metal case, nice display, and quality wiring.

Set-up Notes: We ditched the included XT60 connector and used Traxxas units instead. We only used the Hitec ePowerBox 17A to power the X1 Pro. We charged a variety of packs from a 4S TrakPower Lipo, to a MaxAmps 2S Lipo, to an ARRMA RTR NiMH pack.

Ease of Use: We had a split decision among our testing crew. Some found it easy to use while others struggled and needed to read the manual. For those that needed it, the manual was clearly written and easy to understand. While the menus aren’t that much different than most chargers, the joystick interface took some of our testers a while to get used to. Overall, if you’ve used other battery chargers before, or are at least a bit tech savvy, you won’t have any problems getting the Hitec to do what you need it to.

Power: 16 amps isn’t the most of the market, but wayyyy more than the vast majority of chargers on the market. The 16 amp maximum charge rate allows you to charge a whole lot of commonly used packs at 2 to 3C, which is great for all you “need a pack quick” type of guys.

On the Track: Ok, so the “reference” charger that we compared the X1 Pro to was the very highly regarded iCharger 308. When we hit the track we would sometimes charge up the packs on the Hitec, sometimes on the iCharger, and we didn’t let the drivers know which charger was being used (blind testing). Could our drivers tell a difference on the track? No, not reliably. After dozens of packs, none of our testers could accurately tell a difference in the on-track performance of a pack charged on the Hitec compared to the iCharger.

Speed of 2C Normal Charge Vs Reference (time to charge a pack):

Output voltage at 45 amps after 2C Charge Vs Reference:

For our bench testing we used a high quality 2S 6500mAh LiPo battery. Both chargers were used in “normal” charge modes at 2C (13 amps). A trial run was conducted and discarded, then testing began. The four runs/discharges were run back-to-back with only enough time between charges for the pack to cool. Run 1 was our reference, then the Hitec, then the reference, and the Hitec was again used for the fourth run.

The fan on the X1 Pro (and the ePowerBox) were fairly quiet. You could hear them come on, but they weren’t so loud that you couldn’t easily talk to the guy next to you.

The end of charge alert is a non-obtrusive series of tones that only go off once. They are polite and non-irritating, which is great for quiet settings, but are a bit hard to hear at a bustling indoor track.

The footprint of the X1 Pro is small, like incredibly small. Seriously, it takes up almost no space on your pit table or in your pit bag.

Some of our testers liked the single “joystick”, while others took a while to warm up to it. We’ve been programmed over the years to use multiple buttons to get a charge going, for some it took some adjustment to use the joystick.

The display is back-lit, bright and easily seen in various types of lighting.

Time To Bash: C The X1 Pro comes with a somewhat uncommon connector (and no adapters), for some this will mean having to solder on a new connector being using.

Bash-A-Bility: A Various members of the Bash Crew took turns abusing the X1 Pro and it still lives today. It was dropped and pushed to its limits on multiple occasions and didn’t break, kudos to the Hitec crew on this one.

Power: B Most “average” chargers have a maximum charge rate of around 6 amps, the X1 Pro does 16. It is certainly above average for power output.

Value: B If you’ve already got a power supply, the X1 Pro is a fantastic value. It is street priced at $85, has a LOT of power for that price point, and does a great quality charge. If you don’t have a power supply, most likely you’ll want to drop an extra C-note on the Hitec ePowerBox, which is a perfect mate for the X1 Pro.

BigSquid Rating: B+ We are big fans of the X1 Pro from Hitec. It’s tiny, provides great quality charges, has loads of features, and doesn’t break the bank. Pick one up, we highly recommend it.