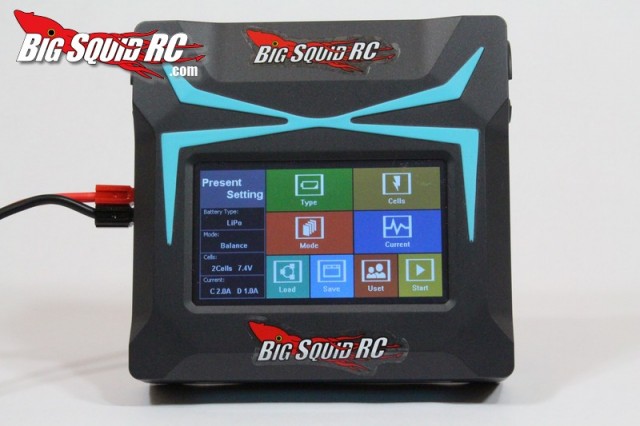 The rc market is seeing a huge boom in not only the quantity of battery chargers, but also in their sophistication and in their power output. An Asian manufacture, iMaxRC, recently sent us one of their uber new X200 touch screen chargers to check out. iMaxRC doesn’t currently sell the X200 in the states, so they are basically looking for a company to pick it up. Does the touch screen work? Can it take a beating? Does it give a better charge than our Hyperion reference charger? And most importantly, is it worth importing to the states? Lets find out…

Primary Competition: There are multiple single port chargers than can bust out 10 amps, but not many that also include a touch screen.

Set-up Notes: We left everything stock but did have to build a Dean’s to Traxxas adaptor to charge some of our packs. We used the extremely sweet TrakPower DPS 25 amp PS to power the X200.

Ease of Use: Hands down, the X200 is the easiest to use charger ever. Yes seriously, the uber crisp touch screen is totally self explanatory, even Iron Mike could charge a pack without having to consult the manual. Heck, Iron Mike could even tap into its higher settings without needing the manual, and this is a guy that normally has a very hard time with anything electronic.

Power: The X200 has a 10 amp maximum charge rate. For some people that will be plenty of power, for others, not nearly enough. If you mainly use 2S 5000 mah packs or smaller, the X200 should have plenty of juice, but if you use higher cell counts and/or capacities, you might want to look for a beefier charger.

On track: All the numbers and graphs in the world mean nothing compared to how a pack charged on the X200 feels on track. Myself, Tim and Iron Mike did some “blind” testing, meaning we would have one person charge a pack on either the X200 or our reference charger, then we would drive the pack to see if we could tell which charger was used. Using this system, we couldn’t tell if the pack had been charged by the X200 or our reference charger. We could tell that our test pack had the same yank out of corners, snap over jumps, and rip down the main straight that we were accustomed to having. We used our MIP/RPM/STRC tuned Losi SCTE for this testing, and it felt just as fast when its battery was charged on the X200 as it did off our reference charger.

Broken Parts/Issues: No broken parts, no loose connections, and no other issues at all. Even after being dropped from our pit-table and from being tossed into multiple pit-boxes the X200 works as well today as when new.

What benefits can you see from a better quality charge? Two things- longer run-times and higher voltage. Years ago it was a big deal to buy a charger that was said to give a better charge than another brand. With the advent of Lipo batteries it seems like everyone has forgotten that yes it is still possible for one charger to do a better job of charging than another. We’ve seen it first hand- we’ve seen chargers that simply would not fully charge a Lipo, and we’ve seen chargers that said 8.40 volts on their screen, but when tested by a multi-meter it showed a significantly lower voltage. The only way to find out if a charger is truly giving you a good charge is to test it first hand, and that’s what we did with the X200.

We did four discharges to determine the quality of fast charge, runs 1 and 3 after using our reference Hyperion 720 iNet3 to fast charge with, runs 2 and 4 using the iMaxRC X200 for fast charging.

Here is how we conducted the tests-

We used 2C charge rates because that’s what we use in the field. We chose a 30 amp discharge as it represents a 6C (10 minute) discharge, roughly the type of run-time we’d expect to get out in the field. Charging was done in “fast charge” mode without balance charging, just like we would do in the field. All 5 charges and discharges were conducted on the same day in the most consistent manner possible.

To boil it down, nothing in our review can be considered a “scientific” trial by any means, a measly 4 discharges is not nearly enough data to declare something as fact. We did these tests to get a general idea if the quality of charge from the X200 was in the ballpark or not.

As you can see in the graph below and the actual voltages listed above, the pack produced up to 2 hundredths of a volt higher output when fast charged on the Hyperion than when it was charged with the X200, and because the X200 went first it should have had a slight advantage (earlier discharges in a group typically yield better results). Btw, 2 hundredths of a volt is a very small amount, so small in fact as to be nearly impossible to tell while actually driving.

Based on this paltry amount of testing it would seem the X200 can give a faster charge by roughly 5-6 minutes. But… looking at the discharge graphs above, when fast charged on the X200, the battery did not have quite the runtime or output voltage as it did when fast charged by the Hyperion.

Our reference Hyperion produced longer runtimes and higher voltage than the X200 when fast charged, but how did they stack up when using a full length balance charge?

Due to time constraints, I only graphed one pass for each charger using balance charging. The X200 went first, the Hyperion was tested second. Both charges were programmed to give the best charge possible, regardless of length of charge. I used the same Pro-Match 2S 5000 mah Lipo as I used for all the other testing, and it started at 3 volts per cell before each charge. I did not measure the time required for each charge- that would vary based on how out of balance the pack was at the start.

When using a high quality balance charge the pack yielded slightly higher voltage when charged with the Hyperion as compared to the X200. The largest difference was around 1 hundredths of a volt, which once again, would be impossible to feel on track.

As you can see in the numbers above and the graph below, the pack produced up to 3 hundredths of a volt higher voltage when it was balance charged as compared to when it was quick charged on the X200. Once again, this amount would be nearly impossible to feel on track.

You know that one guy at your track with that awful charger that makes the most obscene squawking noise when done (and keeps making it until someone gets ticked enough to walk over and smash the buttons)? Well the X200 makes what I’d like to call a “polite” alert. It’s not too loud and it doesn’t get under your skin, it’s just about perfect.

When was the last time you bought a charger that came with a stylus? We didn’t use ours because our fingers worked just fine, but it was neat to see in the box.

Ok ya, so the big selling point of the X200 is that it has a touch screen, yay. But… I can’t emphasize enough what a crystal clear and precise touch screen it is. The details on the screen are incredible, and it responds better to touch than many smart phones that I have used. Seriously, the screen it comes with is head and shoulders better than anything I’ve used on an rc charger before.

All the cords we received with the X200 were too short. To reduce noise we like to keep our power supply under our pit table, that was impossible with the short cord on the X200 as it was only a few inches long.

As all you regular readers already know, we use a whole lot of Traxxas connectors here at BigSquidRC. The iMaxRC X200 makes no provisions for this connector. Yes, soldering up an adapter was quick and easy, but we would like to have seen it already built into its charging port.

After a while of inactivity the screen dims to save power. I would rather the screen have stayed at full tilt the entire time the charger is on.

The X200 is made to be laid down on its back, but you can’t really see its screen, nor touch the screen properly to make adjustments like that. We used a charger stand to prop it up, the X200 either needs to come with a stand, or have its screen angled upwards.

Time To Bash – B – The user interface is extremely fast to get used to, and there is no soldering involved (unless you are using Traxxas connectors).

Car Show Rating – B – Huge props for bling on the incredible detail of the touch screen. However, the case on the X200 is rather bland.

Power – B – The iMaxRC X200 puts out more power than the majority of chargers on the market, but not enough for legendary status.

Value – N/A – iMax RC is a manufacture and the X200 does not have a solid price for the US market at this time, thus I can not give a rating for this category.

BigSquid Rating – B+ – The iMax RC X200 has a lot going for it- it’s the easiest to use charger we’ve ever tested, the touch screen looks great and works even better, and it’s capable of putting high quality charges into your Lipo’s. Will we be seeing the X200 in the states anytime soon? We certainly hope so!

Posted by Cubby in Accessory Reviews, miscellaneous on Friday, February 1st, 2013 at 5:15 pm