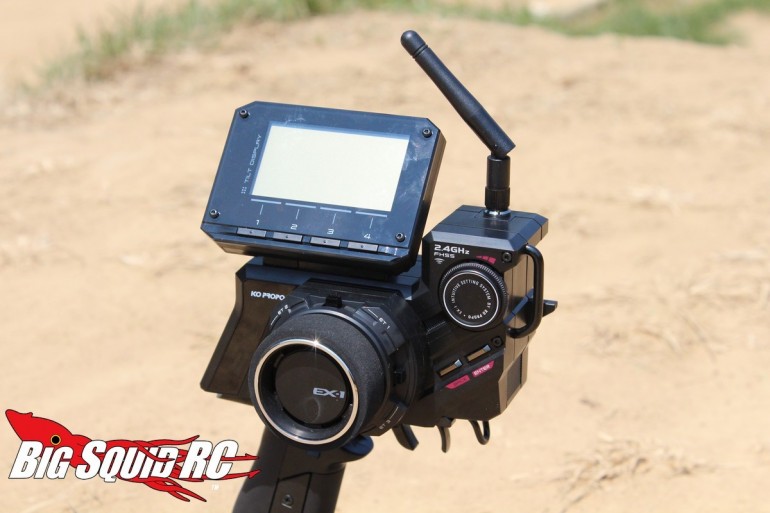 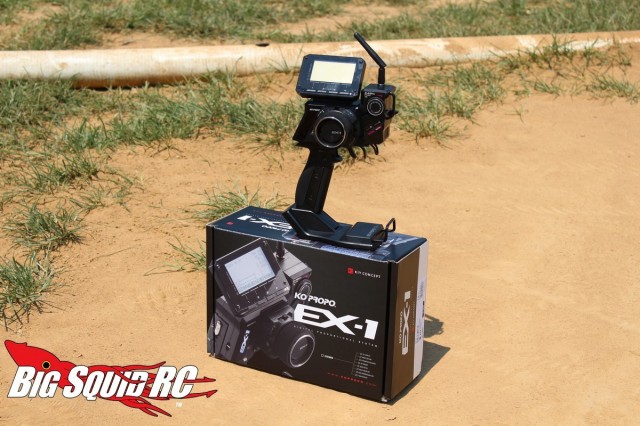 If you are a serious hobbyist, whether it be basher or racer, the most important piece of equipment you can buy is a good transmitter. A good transmitter can be the difference between a perfectly connected feel to your rig, or feeling like someone else is actually driving your truck. KO Propo’s top of the line radio is the EX-1 KIY Version 3. Today we’ll be taking a closer look to see if the KIY is the best radio you can buy, or if its not even worth your time. Hit the “Read More” button and let’s get this party started…

Review by: Cubby
Pics by: Cubby

Set-up Notes- We used only Hitec digital servos and MaxAmps batteries while testing. Test vehicles were a Losi XXX-SCB, Losi Ten-SCTE, and a Pro-Line Pro-2 SCT.

Feel In Hand- I’ll start off by saying the KIY V3 has the best trigger on the market. The lightly serrated fingerprint side of the trigger works/feels awesome, while the fingernail side is the perfect distance away and narrow, making it feel better ergonomically.

The grip is rubber and provides good grip, but it is quite narrow. For instance, the grip on the KIY feels something like a Bear compound bow, narrow, and grippy, where as other high end transmitters have a bit more rounded grip like a Mathews bow would have. Is narrow good or bad? That’s up to you and your personal preference, but the majority of our reviews would have liked a slightly more rounded grip.

The relationship between the grip, wheel and trigger felt good on the KIY, but not as good as it could have been. We are big fans of drop down wheels and that doesn’t come standard on the KIY.

Finally, weight bias. The KIY V3 is top heavy out of the box. The batteries are in the grip handle, leaving virtually no weight at all in the base. If you are a fan of top heavy radios you’ll feel quite comfortable with the KIY, if you like neutral or bottom heavy, you aren’t going to like the weight bias of the KIY.

Ease of Use- The receiver was very easy to bind and the menus were easy to get used to. We found the KIY very easy to set-up and use.

Features- We only used the KIY V3 in basic basher type installs, thus there were more features on tap than we could ever use.

Glitching- We did not experience glitching of any type during our review period.

Driving Performance- Absolutely top notch. We were able to go back to back with a Futaba 4PK Super R and the KO felt awesome. Better than the Futaba? Hard to say, they were very close. Better than other “high end” units on the market? Yes. The KO felt faster and just left you feeling more “connected” to your vehicle than other brands we’ve tried. There didn’t seem to be any lag, and both steering and throttle control felt exceptionally linear. That linear feel was the same regardless of distance. Overall, the KIY V3 drove as well as anything else we’ve tested.

Radio Range- We went with a real world test here and had a little competition between the KIY V3 and the Futaba 4PK Super R. One driver was driving a Pro-Line Pro-2 with the Futaba, while another driver had a Losi SCB on the KIY. The plan was for both to keep driving until they ran out of range. Who won? Well… both, or neither. LOL. Both cars were controllable so far away that we could no longer see the cars well enough to drive them. We then stepped off the distance at over 1000 feet. To boil it down, the KO has exceptional range.

Durability Testing- We gave the KIY the standard “knock it off the pit table test” and it walked away with no issues.

While the KIY came with a nice screen, it did not swivel which made it hard to see in some situations.

The top heavy weight bias was liked by some, hated by others.

The KIY does not come stock with a drop down wheel. The drop down is a $100 option part that makes the KIY feel even more top heavy.

Best Hop-up- Super easy one here, the optional brass counter weight set that goes in the base. It isn’t cheap at $42, but it does help make the radio feel less top heavy.

Time To Bash: B Set-up is fast and easy on the KIY V3.

Car Show Rating: B If you like a high-tech robotic look you’ll like the looks of the KIY, if you like traditional looking radios it will turn you off. Most of our staffers liked how the KIY looked.

Bash-A-Bility: A Even after our drop tests the KIY walked away without issue.

Range: A If you can still see your car, even if it is just a tiny dot on the horizon, you can still control it. We experienced great range with the KIY.

Value: B The KIY isn’t cheap, but then top notch performance never is.

Big Squid Rating: B+ The KO Propo EX-1 KIY V3 is one of the best driving radios you can buy but the top heavy weight bias isn’t for everyone.

Posted by Cubby in Accessory Reviews, Transmitters on Wednesday, August 21st, 2013 at 10:12 am