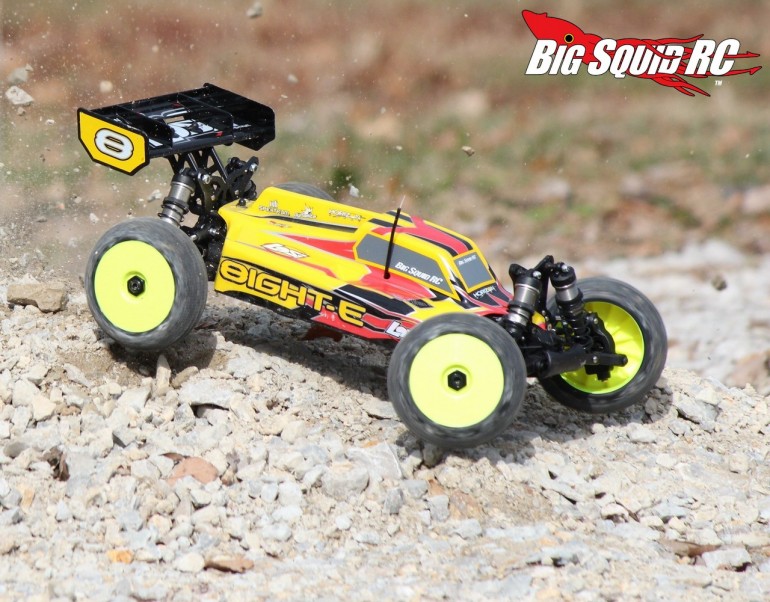 8th scale buggies are prime bash machines, they are fast, corner well, and can make the biggest of the big jumps. We’ve been bash testing the new 8th scale Losi 8IGHT-E RTR for weeks now. Is it a burly bash machine? Can you go huge with it? Does it come with big power? How easily does it break?

What’s Needed To Complete: Not much, just a 3 or 4S LiPO for the buggy and a battery charger.

Build Quality: We found a couple of issues out of the box. One of the rear shocks was leaking, so much so that the box was stained from where oil had been dripping. The bigger problem was with one of the front wheels. Thread lock had been over applied at the factory and left to dry on one of the front axles. When the person went to install the front wheel, the thread lock was so thick they were not able to tighten down the wheel all the way, leaving the wheel quite loose. In addition, they had used great force to tighten the wheel nut as far as they did, leaving the wheel nut extremely hard to remove.

Set-up Notes: We ran the 8IGHT-E bone stock with a couple of exceptions. The stock connectors were replaced with polarized Castle 6.5mm units, we used a Hitec X1 Pro to handle the charging duties, and a MaxAmps 4S 6500 LiPO was used for power. We also fixed the issue our buggy had with its front wheel. This required going Kong on the axle nut to remove it, then we ground off some of the excessive thread lock so we could tighten the wheel all the way down. We attempted to solve the shock leak by cranking harder on the shock cap, but that did not help the issue so we simply added more oil and let’er rip.

Turning: The Losi 8IGHT-E is well known for its turning prowess, unfortunately the servo in the RTR version keeps it from living up to it full capability. The included servo is slow and lacking for torque, leaving the buggy with neutered ability in the corners (perhaps a good thing for noobs). Yes, it could turn ok in corners, but those of us used to how a Losi can turn with a good servo were left disappointed.

Jumping: We have a couple members of our Bash Crew that just aren’t good at jumping. The EIGHT-E jumps so well that even our “not so good” jumpers looked like experts. The 8IGHT-E made it easy for them to keep straight off jump faces and to make the mid-air corrections needed for a proper 4 wheel landing. With plenty of power on tap it was easy to pull the nose up during endos, while a moderate tap of the brake was perfect for bringing down the nose when needed. The Losi pulled off sideways landings as good, or better, than anything else we’ve tested, but it did have one downside- its suspension was set up for dirt, not for big ramp hucks to pavement. If you do a lot of your jumping on pavement or hard surfaces stiffening up the suspension is quick and easy.

Bumps/Whoops: We loved the way the 8IGHT-E blasted through the whoops and other rough sections. The shocks are damped in the ballpark right out of the box, while the chassis geometry is top notch for handling the rough.

On-Road: The Losi is a beast on-road. It has tons of power and its low slung buggy chassis can really get around on-road. It can be made to traction roll at speed, but otherwise it just soaks up and hauls when driven on-road.

Grass: Yes, the Losi does get around ok in grass, it has loads of power and the 4wd to pull it through moderately tall grass. However, its stock tires don’t work well in grass, if you plan on doing a lot of driving in the green stuff a set of Pro-Line Badlands will make a world of difference.

Tires: The stock tires worked well on pavement and hard packed dirt. They didn’t quite have the mechanical grip of full on high-zoot race tires, but did a surprisingly good job. Loam was not their forte, nor was grass.

Power: Have no doubt, there is plenty of power on tap with the 8IGHT-E RTR. We didn’t experience any cogging with the Losi, just plenty of “Holy Cow” rip. The Losi rips hard off the bottom end into a smooth mid-range hit that just keeps on pulling to a 38 mph top end. It has more than enough power to make all the jumps at your local track, as well as more than enough power to do all sorts of crazy stunts at your local bash spot.

Radio: The Spektrum DX2E is a solid radio. Ergonomics aren’t bad, range was solid, and we never experienced any glitching issues. If it just came with foam on the wheel we would be happy campers with it.

Broken Parts: We generally slapped and beat the Losi like we stole it without any breakage issues. Later in testing we were running pack after pack and some screws worked loose out of the motor mount, eventually causing us to burn out the plastic spur. Overall, you can bash the daylights out of the 8IGHT-E RTR without fear of breaking many parts.

We were big fans of the velcro battery straps and battery box, it is the best set-up in the 8th scale business.

The same can be said for the motor mount. It is super easy to adjust and works perfectly. Absolutely top notch.

We did some water testing of the stock electronics and found they can easily handle the occasional splash from a mud hole.

The included tools came in handy while out bashing.

The 8IGHT-E RTR comes with AVC, which we are big fans of. However, the 8IGHT-E is an extremely good handling machine which rarely gets far enough out of shape for the AVC to kick in (on lower settings). We ran the AVC on our test machine at about 1/4 strength which resulted in an exceptionally easy to drive buggy. Our noob driver cranked the AVC knob on the transmitter up to 3/4 and looked way smoother than usual.

Best Mod Under $5: The stock connector is an EC5 which most people don’t run. Solder up your favorite connector and go bashing.

Best Mod Over $5: Easily the best way to spend your money on the Losi is a good steering servo. We popped in a good Hitec digital after testing and it instantly gave it the precision in corners that the RTR servo was lacking.

Time To Bash: D Our test buggy had a wheel issue that took us a while to fix before hitting the bash spot.

Workability: B The Losi had an easy to work on layout. We didn’t have to do a lot of wrenching on the 8IGHT-E, but when we did it was quick and easy.

Car Show Rating: D The big shark fin, cab forward body, and off yellow color were not well received by the bash crew.

Bash-A-Bility: B We slapped and hucked the Losi like mad men with very little breakage.

Fun Factor: A The big fast Losi can make you feel almost like Superman while driving, which needless to say is a LOT of fun.

Handling: B The 8IGHT-E is an exception handling buggy, it is a better steering servo away from being an “A”.

Value: B The Losi is a strong buggy and the included AVC is a nice bonus.

Parts Availability: C While you might not find a lot of 8IGHT-E parts on the pegs at your LHS, there is a good supply of them on the net.

BigSquid Rating: B- The Losi EIGHT-E RTR is fast, handles like a dream, and is a great machine for putting huge smiles on your face.