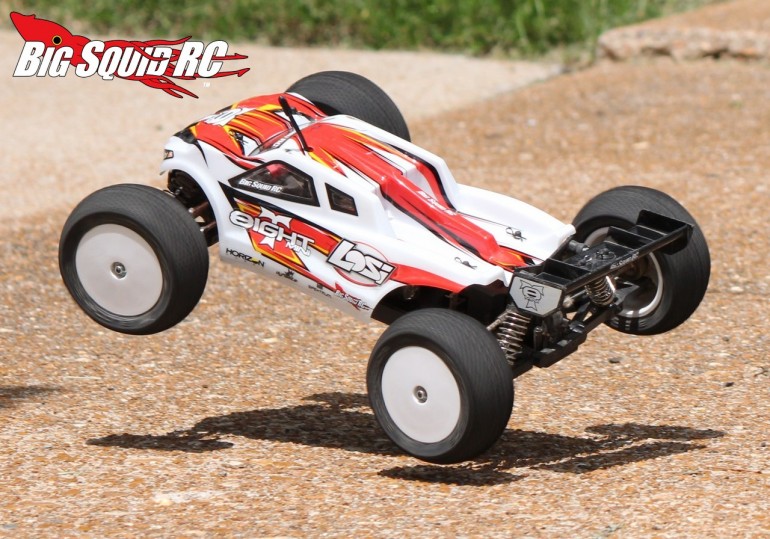 In today’s review we’ll be taking a very up close and personal look at the Mini 8IGHT-T Truggy from Losi. The Mini 8IGHT-T comes in at 1/14 scale, bigger than most minis, but significantly smaller than a tenth scaled truck. It comes brushless powered and with the high zoot AVC that everyone is talking about. Can the Mini 8IGHT-T take the beating required to be a good bash vehicle? Is it worth its $279 price point? Is there enough yank under the hood to keep a smile on your face?

What’s Needed To Complete: Zero, everything you need is right in the box.

Build Quality: We found no issues. There was no binding, no leaking, and the spur/pinion mesh was spot on.

Set-up Notes: We ran the Mini 8IGHT-T bone stock with a couple of exceptions. We did not use the included wall charger, instead we opted for an iCharger 308 to handle the charging duties. For batteries we used the NiMH for a couple of runs plus a run-time and high speed check, the rest of the time we used a 1400mAh 3S LiPo.

Turning: We found that the Mini 8IGHT-T didn’t really push, nor did it over-steer, it remained fairly neutral in most corners. The stock tires are excellent for most surfaces and when combined with good suspension and decent chassis geometry, the Losi cornered with a lot of speed. Noobs found the Losi easy to turn, while Pros liked how much momentum they could carry all the way through a corner.

Jumping: While most trucks without a center diff can be overly sensitive in the air, that wasn’t the case with the Losi. Its tires had low rotating mass, resulting in a truck that responded well, but not too abruptly, while making mid-air corrections. Its excellent suspension helped soak up rutted jump faces, as well as hard landings.

Bumps/Whoops: For its size the Mini 8IGHT-T did remarkably well in the rough. No, it absolutely can not keep pace with larger trucks (like 10th or 8th scale) in bombed out sections of the track or over big dirt clods, but for a small scaler you could hit relatively rough sections with confidence.

On-Road: The Losi was a beast on road. The stock Losi tires had good traction while its low center of gravity kept it from traction rolling. It wasn’t lacking for power either, the Mini 8IGHT-T could easily keep up with much bigger trucks on road (when using 3S).

Grass: Smaller scaled vehicles often struggle in grass but the Losi did just fine. In fact, it did fairly well until the grass hit the top of its hood, any taller than that and it just wasn’t big enough to get through.

Tires: We found the small pins on the Losi Blockheads worked very well on a variety of surfaces. They gave good traction on hard packed dirt, asphalt, grass, and on dusty surfaces. They only places the Blockheads did not work well was in loamy dirt, mud and sand.

Power: While the the Mini 8IGHT-T didn’t feel quite as over-powered as its brother the Mini 8IGHT buggy, it was still plenty quick. On NiMH it had enough yank to keep noobs interested, while on 3S it had the crazy power it takes for backflips and 30 mph wheelies.

Radio: The Spektrum DX2E is standard fare for Horizon products now days and it performed without a glitch for us. This is one of the newer models with increased range which was more than long enough for all the bashing we did. The ergonomics are decent, we just wish the wheel came with a foam covering instead of being hard plastic.

Broken Parts: We drove the Mini 8IGHT-T hard from the very first pack and handed it off to many a noobie during the test period. One time early in testing we were blowing through a park full speed on 3S and hit a dirt clod the size of a football. This only resulted in a popped off rod end. Later in testing we hucked it off a two story drivers stand (multiple times of course), with the only damage being more popped off rod ends and one bent dog bone. Our truck finally came to a halt in sort of a strange way, we were sloshing through mud holes (WFO on 3S) and managed to polish off the spur gear. Overall, the Mini 8IGHT-T took a whole lot of abuse and we consider it one of the tougher small scale trucks you can buy.

The truck comes standard with Horizon’s uber AVC (active vehicle control) system but because the truck handled so well, and because were mainly drove on high bite surfaces, we didn’t use it much. For the majority of our testing we kept the AVC turned down to about 25% of its potential and loved how the truck handled.

The servo on the truck will not need to be replaced any time soon. It had plenty of power and speed, we really never noticed anything bad about it.

We liked the overall size of the Mini 8IGHT-T. It is significantly larger than the Mini 8IGHT buggy and other vehicles like the 16th scale Revo. It was just large enough to handle a rough outdoor track, while being small enough to be used in a small driveway. Its smaller size holds it back over really rough terrain (compared to a 10th or 8th scale), but helps make it more versatile overall. We almost want to call it a “mid scale” machine. It’s not nearly as big as a tenth scaler, but it’s a whole lot bigger than most 18th scaled vehicles. Whatever scale it may be, it works well in a very wide variety of conditions.

One of the best features on the truck is the fact it uses 10th scale buggy tires. This opens up an enormous selection of kicks to choose from, and they are large enough diameter to handle much rougher terrain than a normal small scaled truck.

We were not fans of how the speedo would go instantly into reverse. This makes it hard to get the truck to stay exactly where you want it to, and in some situations can make you slam rear end first into hard objects.

We noticed some cogging on the brushless system from a dead stop. We noticed this on both NiMH and LiPo batteries.

The Mini 8IGHT-T rarely traction rolled unless it caught an edge while cornering. The truck has a very low center of gravity and its handling benefits greatly from it.

The stock settings on the shocks were right in the ballpark. Damping was well controlled front and rear, and the spring rates were right on for multiple conditions as well. Kudos to the guys that picked the stock set-up.

Best Mod Under $5: We rarely use EC3 connectors (which the truck comes with) so use the $5 to convert over to your type of connector.

Best Mod Over $5: If you are a noob, stick with the included battery until you get used to driving. For everyone else, cut the check for a 3S LiPo, it turns the truck from average into a beast.

Time To Bash: B Everything you need is in the box, we just wish the wall charger was a bit faster.

Workability: B Luckily we had to do very little wrenching on the Mini 8IGHT-T, but when we did we found it quite easy, especially for a small scale vehicle.

Car Show Rating: B We are not big fans of “cab forward” bodies or dish wheels, but the majority of our testers liked the look of the Mini 8IGHT-T.

Bash-A-Bility: B Our truck took some massive hits with very little in the way of breakage. For the most part we found we could hand it off to noobs without worry, and hit the occasional hard object without having to look for a wheel afterwards.

Fun Factor: A Ok, so the Losi isn’t an “A” in fun factor on the stock pack, but it certainly is after a 3S LiPo has been installed. On 3S the Mini 8IGHT-T is a hair raising speed machine that keeps coming back for more.

Handling: A After some long conversions with all our testers, we simply can not think of another small scale vehicle that handles as well as the Mini 8IGHT-T. It corners incredibly well, jumps better than anything else in its class, and its stock suspension settings are right on the mark. Kudos to the Losi crew for the way the Mini 8IGHT-T handles, it is top notch.

Value: A At $279 the Mini 8IGHT-T isn’t cheap, however it is the best value in its class. How can that be? Because… it arguably does everything better than the next best mini truck on the planet (the Mini Revo) and comes in at a $40 lower price point.

Parts Availability: C Sorry folks, you won’t find parts for this Losi truck on the pegs at many local hobby shops, thankfully they are readily available on-line.

BigSquid Rating: B+ How do we sum up the Losi Mini 8IGHT-T? It is an awesome bash truck. Yes, it might be a smaller scale but it is large enough to get around just fine in most normal bash spots. It comes with a powerful brushless system to keep the smile factor high, and with arguably the best handling of any small scaler ever produced, we can highly recommend the truck to you.