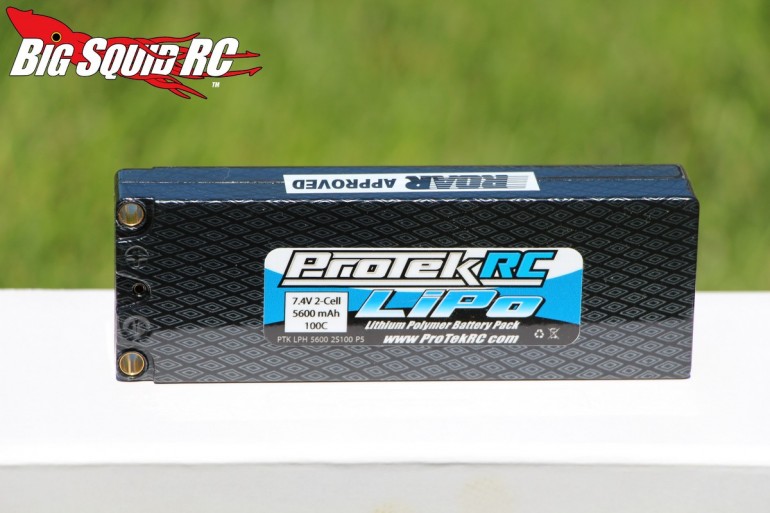 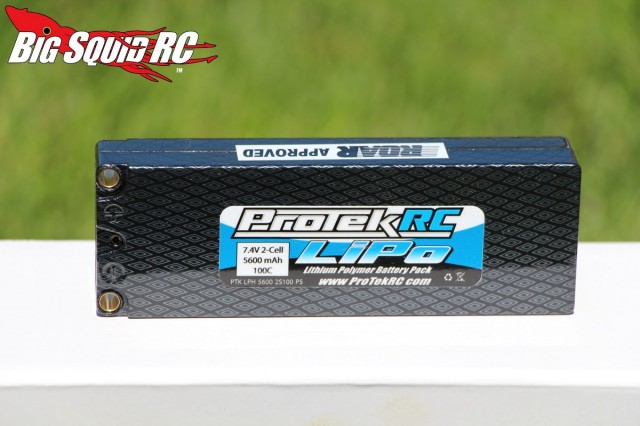 The rc world is still dominated by electric power and that doesn’t look to be changing any time soon. That fact means that nearly every hobbyist is going to need a good battery pack for his truck. Today we’ll be putting the hammer down on the latest Lipo battery from ProTek, a Supreme Power 2S 7.4v 100C 5600 mah pack. Does it have good power? Does it live when you jump it off the roof? Is it right for the basher crowd? Let’s find out…

What’s In The Box: You get the battery, stickers, two 5mm bullets and one 2mm bullet. The pack does not come with any wiring or balance plug.

Driving Impressions: We got a lot of driving time in with the ProTek and it always proved to be an impressively quick pack. We went back-to-back with other “high end” packs of a similar capacity and “C” rating and the ProTek never failed to impress. The ProTek always seemed to have as much power, if not more, than every pack we compared it to.

While driving the ProTek in our ECX Torment it certainly made the stock brushed motor seem like it was the quickest it has ever been. In our Pro-Line Pro2 it supplied more than enough current to keep its brushless system pulling hard. The ProTek had intense punch off the bottom and seemed to keep on pulling forever on long stretches where you could leave it pinned. Overall the ProTek was arguably the fastest pack (of its class) that we’ve ever driven.

Downsides: The biggest downside was the lack of wiring and balance plug. Racer types can simply solder the included bullets on to the wires coming out of their speedo, but most basher types will want to add wire to the pack. That takes up more time to solder up and costs more money.

The ProTek had a perfect form factor and easily fit in normal sized battery trays.

The 5mm bullets are nice to have, they can handle a lot of juice for those crazy high current applications.

The first graph above shows the 1C discharge of the Protek, the next is how it performed under heavier loads, and the last shows how the ProTek stacks up against an Orion and a Gens Ace at 30 amps.

We used a West Mountain CBA discharger to performed a 1C/5.6 amp discharge to test capacity. Next we did a 30 amp discharge, then a 6C/32.4 amp discharge, and finally a 60 amp continuous discharge to see how well the ProTek held its voltage under a continuous load. The higher a battery can hold its voltage, the faster your car/truck will be. Ambient temp for all bench tests was 69 F, the pack was always charged on a Hyperion 720iNet3 at 2C/11.2 amps and voltage cut-off was always set at 3.0 volts per cell during discharges. We tested the ProTek wired with 10 gauge Castle wire and a Traxxas connector.

ProTek lists 5600 mAh as its capacity, we measured 5695 which is 101.7% of stated. Being slightly high and less than 2% off of stated capacity is very impressive. Kudos to the ProTek crew on not over or under stating the capacity.

Overall the ProTek 100C 5600 was an impressive performer on the bench. It did not put out the highest voltage that we’ve ever tested, but it was right up there with the elite performers. Performance at 6C was quite strong and it was even more impressive under a 60 amp load. The ProTek put out some of the highest numbers we’ve seen for the first half of the discharge on a 60 amp load.

Time to Bash: D The ProTek doesn’t come with wire or a balance port. It takes longer to get the ProTek ready for the road than many of its competitors.

Bash-A-Bility: A We experienced no issues at all with the ProTek pack. We submerged it in water, hit it at 60 amps continuous, it suffered numerous high G impacts in vehicles getting hucked to pavement, and it came through without suffering any damage.

Power: B On track it felt exceptionally strong, on the bench it put out solid numbers at the upper end of any comparable pack we’ve tested.

Value: B The ProTek comes in at a $99 price point and packs some serious power. The Protek outperforms some packs costing more than it does, but there are a few less expensive packs that are right in its league.

BigSquid Rating: B- If the ProTek would have simply came with wire its overall “grade” would have been much better. While racers might prefer to use their own wiring, bashers want everything they need right in the box for a typical install. Otherwise the ProTek 5600 was a rock solid pack that will impress you with its performance. There are a lot of slow packs out there and a lot of packs that are middle of the road for power, but the ProTek runs with the elite packs, it’s fast.