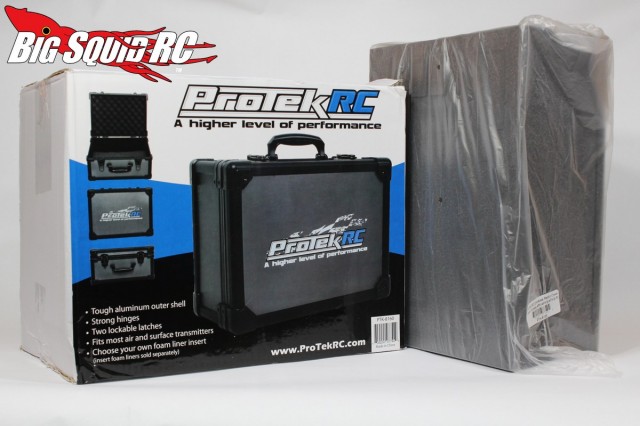 You’ve spent a lot of money on your transmitter, spending a little more to make sure it’s protected is a good idea.

The crew over at A Main Hobbies have a new universal transmitter hard case for your uber radio. You buy the case then select the proper insert that is specifically cut out for your model of transmitter. Is the ProTek radio case tough? Does it hold up? More importantly, is it worth your hard earned cash? Lets find out…

What Is It?: It’s a hard case with soft foam insert used to store and protect your transmitter. Inserts are available for dozens of different transmitters.

What’s In The Box: A hard transmitter case and keys. The foam insert comes separately and is cut for the individual model that you select.

Review Platform: We selected the ProTek part #PTK-8165 for Futaba 4PK series radios for the insert. Roughly half of the BigSquidRC Bash Crew use a Futaba 4PK series transmitter on their personal gear so it was an easy choice.

Installation: It takes about a minute to remove the pre-cut area for the transmitter and put the insert into the hard case. We experienced no issues getting the case set-up.

Durability: Remember that old Samsonite commercial where the gorilla throws the luggage around? Ok, us old farts remember it, for you younger guys a quick search on YouTube will hook you up. Anyways, we threw the ProTek case around like it owed us money. We dropped the case from a height of 5 feet three times and tossed it at a cement wall twice. The ProTek case came away a bit tweaked, but nothing a little elbow grease couldn’t bend back

Also… shorter drivers often stand on top of their transmitter cases while on the drivers stand, this gives them a few extra inches of height for a better view of the track. We put Iron Mike on top of the ProTek case to see how it would hold up. Iron Mike is no lightweight, he weighs in at 240+ lbs, and he felt the ProTek case was sturdy enough for him to stand on. And no, he didn’t cave it with his massive girth.

The handle, while quite usable, felt a bit on the cheap side.

The ProTek case is lockable, but the locks are easy defeated.

The radios we used for the review, all Futaba 4PK series units, are fairly wide, requiring a deep case. The ProTek was plenty deep to handle the Futaba.

ROAR legal Lipo batteries slide right in some of the pre-cut holes in the insert.

There are plenty of extra pre-cut spaces in the insert for other gear like servos, receivers, etc.

Time to Bash: A It takes all of 2 minutes to pop out the pre-cut foam pieces and get the case ready for action.

Car Show Rating: B The BSRC Bash Crew liked the looks of the ProTek case.

Bash-A-Bility: B We were quite rough with the ProTek case but only managed to tweak it.

Value: C The ProTek case comes in at the same price point as the Futaba brand case. The Futaba feels a bit better constructed, while the ProTek is set-up to simply pop in a new insert if you change radios.

BigSquid Rating: B ProTek has a good radio case here. It takes a good beating, looks good, and is easy to change over to another model if needed.

Posted by Tim Mohr in Accessory Reviews, Featured Posts, ProTek on Wednesday, April 24th, 2013 at 9:03 am