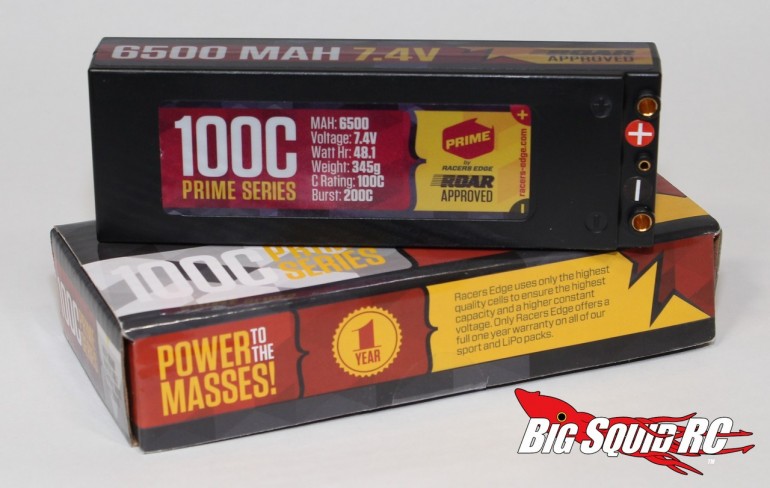 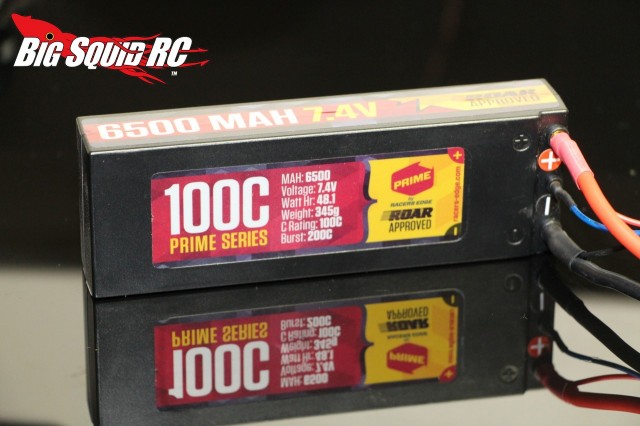 With today’s high powered brushless systems a quality battery can make all the difference between having a really good day, or a really bad one. A good battery can not only make your truck faster and give longer runtimes, but can also supply enough current to help prevent cogging. Today we will be taking a very close look at one of the new 100C LiPo packs from Racers Edge. Does their 2S 6500mAh LiPo put out good power? Does it give long runtimes? Can it take the abuse of being bashed hard? Hit the “Read More” button to find out…

Test Platforms: We used the Racers Edge in four distinctly different types of vehicles. First up was our Pro-Line PRO-2 SCB buggy powered by a Castle 7700Kv brushless system. The second vehicle was our Vaterra Halix review truck powered by its stock brushless power plant. Our third test vehicle was our review Durango DETC410 sporting a TrakPower 8.5 brushless system. Our final test vehicle was a bone stock ECX Torment, complete with brushed motor. For charging, we used a Hyperion 720iNet3 at 2C for all our lab tests, then an iCharger 308 at 2C when we hit the field for in car testing. We cut off the stock Deans and installed a new Traxxas plug for all of our testing.

Fit: The Racers Edge LiPo is the standard ROAR legal 2S size so it fit well in nearly all the vehicles we had sitting around. However, because of the way the bullets come out the top of the case, it didn’t fit well in certain vehicles with bottom load batteries and another review truck that had a large/wide battery bar.

Starting with our slowest test vehicle, our brushed ECX Torment, the Racers Edge LiPo made it feel like a rocket when compared to the 1800mAh NiMH we had been driving it with. The Racers Edge had loads more low-end, making it easier to wheelie and to throw big roost from a dead stop. The Racers Edge also gave the truck higher top end speed and more than tripled the runtime we had been getting. The 2S 6500 was vastly superior, in every way, to the low-end NiMH we had been using.

Then we start driving it in our higher powered vehicles. It certainly had more than enough yank to whip around our Durango touring car, and we were easily clearing all the big jumps at the local track with it in our PRO-2 SCB. Our Halix presented the “heaviest” load to the Racers Edge, and we experienced no cogging and plenty of pull from bottom to top.

Part of what we do with all the batteries we review is to “blind” test them against other packs. We have one of our Bash Crew members install different packs into a review vehicle where the drivers can not see which brand is being installed. They then test drive the vehicle not knowing which pack is in the truck. Afterwards, we compare notes to find out how each of the packs felt while on track. We do it this way to help eliminate bias. When compared to our “2S reference LiPo” (the best pack we have) the Racers Edge ended up feeling a bit soft for power. While quick, it didn’t have the raw amount of grunt from a dead stop as our reference, nor did it wind out as far on the top end. While not a huge difference in feel, it was noticed by all of our review drivers.

Please see our previous LiPo battery reviews if you are not familiar with how we perform our bench tests. I will say that with my thousands of hours behind a CBA and Tim’s years with Lipo battery companies like Apogee and Maxamps, that we are very hardcore about our LiPo battery testing.

Overall – The Racers Edge put out decent, but not impressive, numbers on our West Mountain CBA. Compared to other packs in its capacity and “C” rating range, its voltage numbers were solid, but lower than most of its direct competitors that we have tested. On capacity, it came up short of stated. At 1C it was almost 5% less than stated, which is more than we would have liked to have seen. Pack temps while under load were in-line for a high end pack, and even though it came up short of its stated capacity, it still put up respectably long runtime numbers under a 30 and 60 amp load. From looking solely off the numbers of the CBA, the Racers Edge is the type of pack that would be better suited for use on high powered brushless systems than in “stock” class racing. It has respectable run times, it doesn’t get hot under a big load, but doesn’t put out the kind of voltage numbers that you would need to be competitive in the stock class where every tenth of a volt is precious.

Time to Bash: B Our test pack came with a pre-soldered Deans and its 2C charge rate helps keep charge times down.

Car Show Rating: B Our testers liked the looks of its gold/maroon livery and bold “100C” label on top of the pack.

Bash-A-Bility: A We had no issues with the Racers Edge pack for the duration of our testing. It took the 60 amp continuous load of the CBA and the big g-forces of several roof jumps without issue.

Power: C The Racers Edge pack has enough juice on tap for general driving, but among its peers its voltage numbers (and feel on the track) come in about average.

Value: C The 1 year warranty is nice, it has long runtimes, but at a $119 price point we consider it an average value.

BigSquid Rating: B- We’ve put over 80 cycles on the Racers Edge Prime 2S 100C 6500 and it has never failed to power us over a big jump, or to get us over a huge hill. It has taken the beatings we’ve put on it and has been a solid pack for us while out bashing.