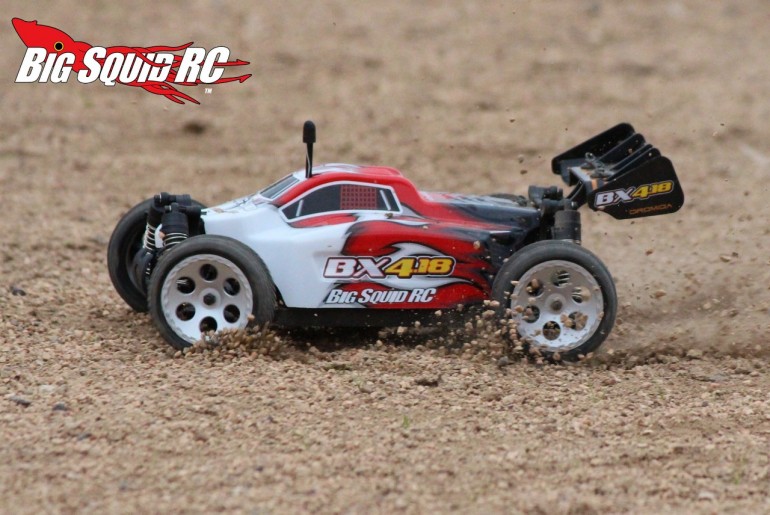 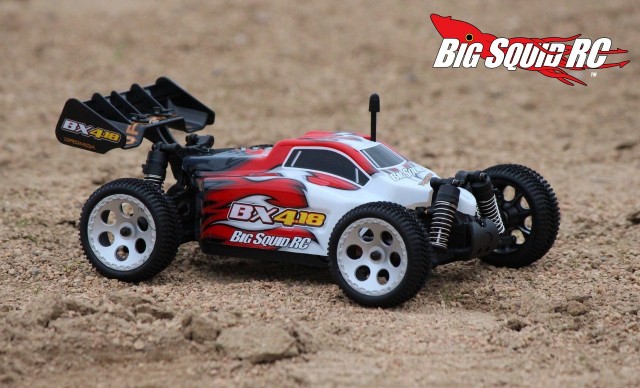 We’ve tested the other two models in the new Revell Dromida line-up, today we’ll be taking a close look at the buggy version, the BX4.18. The BX4.18 comes on the same Dromida platform as the other models- 4wd, 18th scale, and ready-to-run, but includes different wheels, tires, body and rear wing. Is the BX4.18 worthy of your hard earned cash? Lets find out, click the “Read More’ button to get the party started…

What’s Needed To Complete: Absolutely zero, everything you need to get rocking comes in the box.

Build Quality: We found everything to be well assembled except for the two steering rack pins that had popped out of their top mounts during shipping. It simply required pushing them back in to fix the issue, which was super easy. Otherwise, all looked and felt good.

Set-up Notes: We ran the buggy bone stock just like it came out of the box except we did not use the included wall charger. For charging duties we used a Hitec X1 Touch.

Turning: The front end typically had more traction than the rear on the BX4.18. If you were driving on a high bite surface, the front end would bite right into corners, with the rear feeling a bit loose. The looseness in the rear allowed the buggy to easily rotate in sharp corners, and at speed the rear tended to stick better and just follow the front around.

Jumping: The BX4.18 was a good jumper for an 18th scaler. The buggy tended to come off jump faces straight, except for when the faces were really bombed out, and the suspension soaked up landings well. The only downside we had with jumping was the stock powerplant, it didn’t have a bunch of revs to full the front end during an endo.

Bumps/Whoops: Being a bit overdamped, the BX4.18 tended to bounce around in choppy sections. The overdamping come in handy on fast square edged bumps, but on smaller bumps like rocks or dirt clods it caused the buggy to hop instead of absorb and rebound.

On-Road: The BX4.18 was a very good machine on pavement. The BX4.18 is low slung so even when turned abruptly at full tilt it doesn’t traction roll. Also, the stock tires provided excellent traction on pavement.

Grass: The small tires and low ride height limit the Dromida to very short grass. Should you end up in any sort of tall grass the buggy immediately gets stuck. If you do a bunch of short grass running the BX4.18 is a blast, if the grass gets taller you need to consider a larger scale vehicle.

Tires: The stock tires were really quite good. They worked great on pavement, hard packed dirt, carpet, and on dusty surfaces. They didn’t perform so well on loamy dirt or in mud, but then you can’t have everything in one tire. Also, because they work so well on high bite they could be legit race tires, they are that good.

Power: It was quite obvious the designers of the Dromida BX4.18 put in a powerplant that would be noob friendly. It has enough power to keep a noob on their toes but for more experienced hobbyists it feels slow.

Radio: The included transmitter is used in a number of Hobbico products and we are generally fans of it. We like its ergonomics and we’ve never had a glitching issue with one. In other Hobbico models the range is solid, but in the Dromida line we’ve experienced shorter range. With the BX4.18 we measured a 280 foot radius, which is enough to have fun, but not huge.

Broken Parts: We put our test BX4.18 through some very tough days at the local bash spot. Because it is generally very durable and it doesn’t come with a lot of power, we found it quite difficult to destroy. We ended up breaking a front steering knuckle when doing a 2 story roof jump. It must be noted that the ambient temp was only 34 degrees that day, so had we performed the same jump on an 80 degree day it might have survived.

We like waterproof vehicles and the BX4.18 proved early in testing that it could take some serious water bashing.

The included battery pack states 1300mAh but tested at more than 1400. More capacity means more runtime and we tested runtime at a solid 15 minutes.

We had some issues with our buggy centering properly. You could make steering trim adjustments, but even a small adjustment seemed to overcompensate.

The stock spur gear cover worked well, it kept a whole lot of ugly out of the spur/pinion area, even when we drove it in sand.

While the platform might be the same as the other Dromida vehicles, the BX4.18 was arguably the best handling of the bunch. The biggest difference? Tires, we really liked how the shoes on the BX4.18 performed.

Best Mod Under $5: We popped in Associated 30 weight shock oil which immediately made a big improvement in the handling of the buggy. Shock oil is cheap and it only takes a few minutes to install.

Best Mod Over $5: More power. If you are a noob the stock power will keep you interested, but if this isn’t your first rc rodeo throwing some bucks into the power system will instantly wake up your senses.

Time To Bash: B Everything you need comes right in the box. Pop in the transmitter batteries, charge the pack for the buggy, then you are ready to jam.

Workability: B The Dromida 18th scale platform is very easy to work on but we were not fans of the Phillips hardware.

Car Show Rating: B The graphics are tight, the rear wing is very trick, and the tires looked good, the BSRC Bash Crew liked how the BX4.18 looked.

Bash-A-Bility: B It takes absolutely zero breakage to get an “A” in the Bash-A-Bility category, and although it took some insane abuse, we did manage to break the Dromida.

Fun Factor: C The Dromida is a good handling buggy and it took some serious beatings, but the stock powerplant was very soft.

Handling: B Does the BX4.18 handle better than the Associated RC18B2 which is typically considered the best in this class? Possibly. We just can’t say for sure without doing a back to back comparison/shootout, but we do know the BX4.18 turns and jumps very well.

Parts Availability: C Nope, you won’t find Dromida parts in every hobby shop in the country like you would with Traxxas, but they are becoming more and more available at on-line sources.

BigSquid Rating: B- The Dromida BX4.18 is a solid buggy that makes for a good bash machine. We’ve driven our test unit for hours and hours- smashing and crashing, jumping and bumping, and we’ve had a lot of fun all along the way. The BX4.18 has been a “go to” buggy for us, always ready to bash. Pick one up, it’s good little bash machine.