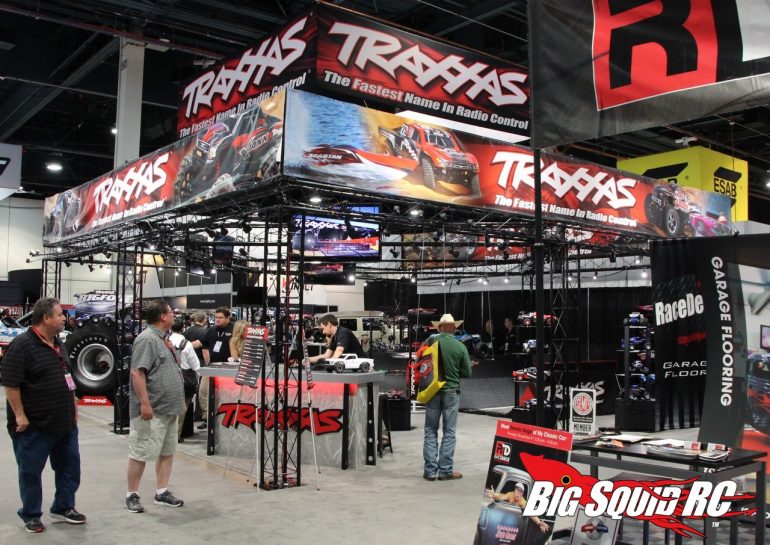 To help keep all you hardcore bashers in the loop, we loaded up the BigSquidRC Bash Crew and headed out to Las Vegas, Nevada for the 2016 SEMA Show. Of course the first booth we dropped by was Traxxas. Traxxas is legendary for their off-road trucks and we couldn’t wait to see all the uberness that was inside their booth.

Being shown for the first time at the SEMA Show was a New Ford Raptor Slash (shown in white below). The Raptor has a number of precision injection molded plastic parts on its body for an amazing amount of scale realism. The grill, front bumper, and rear view mirrors were incredibly detailed, making the Raptor one of the most realistic bodies that Traxxas has ever done.

Also in the Traxxas booth was a very trick display for their recently released Bigfoot monster truck. A Firestone monster truck tire made a perfect display for the Traxxas Bigfoot. Traxxas was also showing off the burly X-Maxx, their high flying Aton quadcopters, as well as a huge selection of other models from their line-up. Speaking of models, the Traxxas spokemodels were on hand to sign autographs and to take pictures with fans.

Enjoy the pictures below to see the new Ford Raptor and to get a feel what the Traxxas booth was like at SEMA. To learn more about all their fine products simply hit up This Link to visit the official Traxxas website.

Get more of the Latest Traxxas New right here on BigSquidRC.