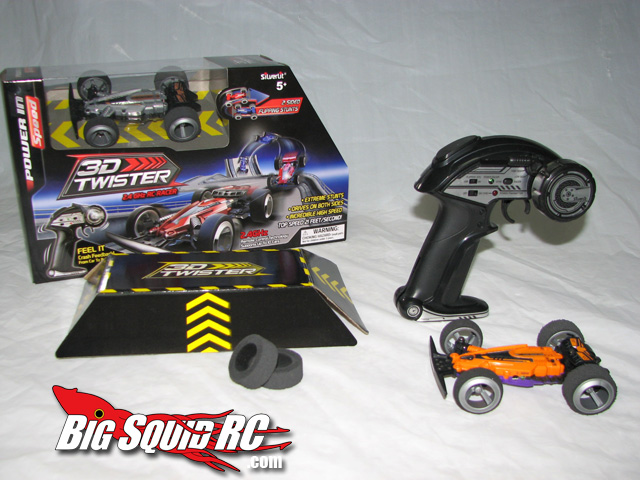 So a perk of owning a major RC news site is I get to take home the occasional vehicle for the kids to check out and bash with as well. I would guess they have played with or driven dozens and dozens of rc vehicles over the past years. A few weeks ago there was an ad on the Disney Channel or Nick or something for these 3D Twister rc cars, and my kids were nuts for them! It was all “WOW! We need those!! They look AWESOME! Dad, does your work have those? Can you bring some home?” It hurt my head.. I have RC monster trucks that look like dogs, vehicles that can jump houses and do 60+ mph, and they have never been so excited over any of those. So needless to say the 3D Twister cars were on the way. Is there still the hype? Did the kids like them? Did we like them in the office? Keep reading to find out…

Age Rating- 5 years+
Scale- Micro. ~5 inches long, 3 inches wide
Colors- They have several, and each car has a different color on each side.
Radio- 2.4Ghz, with feedback!
Battery- 3.7v Lipo

What’s In The Box– In the box we got, it comes with 1 vehicle, radio, extra set of rear tires, and a cardboard mini ramp. It looks like now if you buy them online, you get several extra large ramps and mini obstacle cones.

Build Quality– It’s hard to judge since there is little to no maintenance you can do yourself. They showed up in good working order.

Set-up Notes– We did have to adjust the steering settings to keep it going straight. This is easily done by a lever on the bottom side of the car.

Charging– To charge the vehicle, you need to plug it into the transmitter, then turn it on. Average charges times were 15 minutes. A wall charger would of been welcomed. Being able to charge from the controller is great for kids on the go, but will run down your AA’s in the transmitter.

Why is it Special– The 3D Twister has all sorts of things that make it special. They claim to be the first 2.4Ghz RC Vehicle. We assume they mean in the ‘toy market’ because in the hobby 2.4 has been around for years. But it’s still a good jump for the toy stuff! No more 27 mhz or 47 mhz stuff. It has bump feedback in the controller! When we were testing, I never told anyone about it.. then they would hit something and be amazed! While you may think this sounds cheezy, it’s pretty cool. It’s just like having rumble on your game controller. When it lands upside down, all the controls automatically flip. For example.. if you were turning left driving forward, and you hit a ramp and flipped, when you landed you would still be driving forward and turning left. If you did this with a normal RC vehicle, you would be driving backward and turning right. You can hold the car in your hand, and flip it, and watch the motor and the steering change right before your eyes. This was great for indoor bashing.. no getting up off the couch to flip it over after an insane jump and bad landing. You just keep driving. It has a lipo battery! At the time of writing this, I don’t know any other toy grade RC vehicles coming with lipo’s!

Why the name 3D Twister?– My guess, it’s twisting action in the air. When it’s air born, the huge power from the tires gets it flipping and twisting all over the place.

Power– From the first pull of the trigger, everyone who test drove it said ‘Whoa!’. The little thing is fast. The speed was about 15mph, and with the bigger extra tires, even faster. Now I know what your thinking.. 15mph.. that’s nothing.. Let me tell you, 15mph makes walls and furniture come up real fast when driving a micro sized vehicle like this. The larger tires even have it doing wheelies and more flips in the air!

Jumping– Once in the air, you don’t have much control at all. You are at the mercy of the vehicle. You are not going to by timing your landings, or anything like that. Pull the trigger and hope for the best. Because of the speed, it does jump pretty high, and it’s been durable. We have jumped it off everything including huge flights of stairs, our van outside, and tons of homemade ramps. We have landed from 8 foot high jumps and tumbles.

Suspension– The front suspension is just soft plastic for a-arms, and the rear has a little spring that dampens the landings no matter what side you land on.

Tires– The tires are VERY soft foams. It’s good they give you an extra set because you’ll go through on rough surfaces. The bigger ‘extra’ tires they give you make the car much faster, and let you pop wheelies. 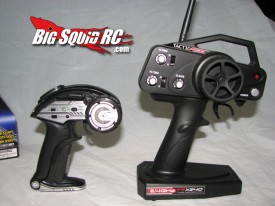 Radio– Not too many radio’s have a rumble feature. And the ones that do, don’t rumble when you land hard or hit something! It’s a bit on the small side as you can see from the comparison to a normal size RC radio, but it still feels ok in your hands. It has a high speed and low speed setting, and I’m not sure this does much.. maybe goes from 14mph down to 12? It’s still VERY fast on low.

Broken Parts– None. We have jumped it down flights of stairs, jumped off our van onto pavement, and jumped 100’s of times off homemade ramps. We have not broken a thing!

Overall– After playing with it for a while now, the kids still dig it. There are not too many RC vehicles I let them bash with in the house, but this one does just fine. It’s fast, super durable, and pretty fun. Never before has anyone marketed a ‘toy grade’ rc vehicle to jump they way this one does. Building mini tracks and jumps for it has been fun, and everyone in the office has enjoyed bashing with it.

Issues– The steering is not analog, or even steps. It’s LEFT or RIGHT, or STRAIGHT. This is because there isn’t a steering servo. It’s like an electronic magnet. So while that’s not great for precision and steering, there are no gears to strip, and when you crash (which you will do a lot) there’s nothing to damage. At high speeds on a high grip surface like carpet, this can be an issue because one of the tires will grip and pull the vehicle in any direction but straight. Our only other issue would be price. At $49 it seems a little high. Granted, it’s 2.4, has a lipo, is fast AND durable, and it does come with the extra ramps and stuff. So price is a tough call, I’m sure they will sell a ton of these over the holiday season, but I think it would be a easier buy if you got two for that price. Isn’t that how the On TV stuff works? You always get a extra right? 🙂

Workability – NA/10 – You aren’t really going to be working on this thing. It’s meant to be a contained toy

Car Show Rating – 8.0/10 – The colors are nice and bright. It looks pretty cool, but I think they could of done a little more.

Bash-A-Bility – 10/10 – For a indoor bashing vehicle it can take a serious beating! We have used it outside as well, and landing 8+ feet on the concrete, it’s still alive.

Value- 8.0/10 – It’s a good product, but I think it’s a little on the high end. Though, most toy grade stuff is in that price range, and this is more fun than average for sure.

Big Squid Rating – 8.5/10 – Tentacles.. It’s fast, durable, and lets you bring some serious bashing indoors. Any kid that gets one won’t be disappointed.