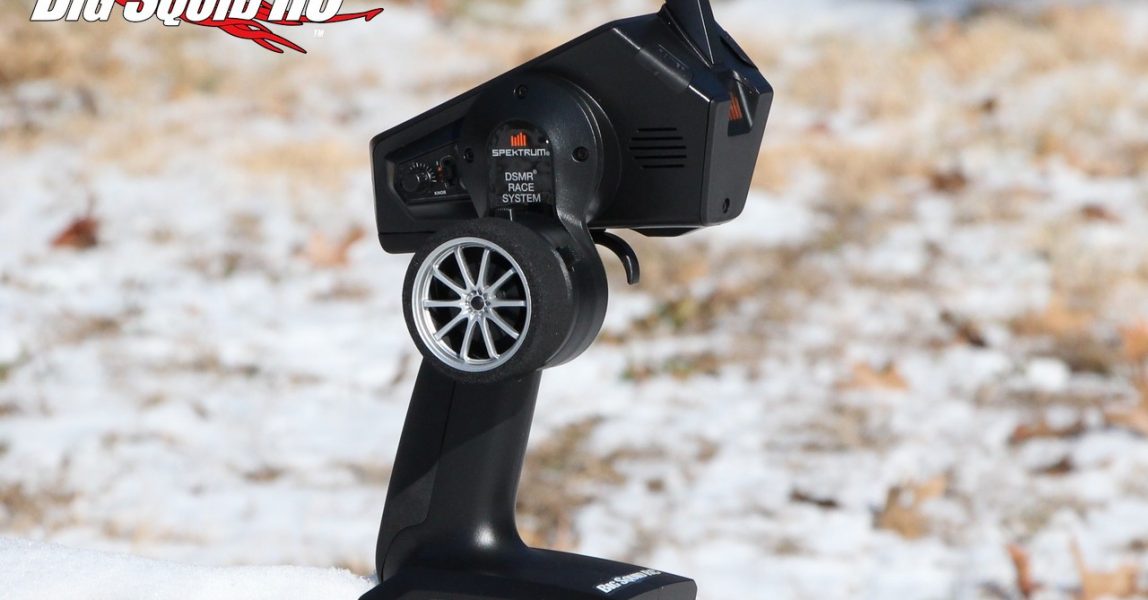 While the BigSquidRC Bash Crew doesn’t make a point of reviewing all the latest “racer” oriented gear, we do make a point out of reviewing higher-end products when possible. It is true that most bashers use products at the lower end of the price range, yet there are still plenty of them that have no problem cutting the check for the best of the best.

When we saw the initial press release for the Spektrum DX6R, we were very impressed by its feature list, but had a lot of questions. Questions like how easy is it to operate? Have they improved the range? What does it feel like to drive? Tell you what, we’ve spent months driving the DX6R, keep on reading to find out the answers to all those questions and more…

Review By: Cubby
Pics By: T-Money

What’s In The Box- A lot of stuff. You’ve got the transmitter, 2 receivers, a charging base, a manual, an extra wheel, 2 extra grips, a bind plug, an antenna tube, a start up cheat sheet, and two wheel angle adapters.

Build Quality- Our Bash Crew could find no faults with the built quality on the Spektrum. The radio and receivers looked and felt well assembled and we had no issues out of the box.

Test Venues- Pretty much too many to list. We’ve used the DX6R for months and taken it everywhere we’ve gone. So… lets just say around 30 different venues scattered all over Illinois, Iowa, and Missouri.

Feel In Hand- Guess what? The DX6R has some weight to it. No, it isn’t as heavy as its competition, but it has enough weight to feel like a high-end radio, and that is a good thing. Some of the other top-of-the-line Spektrum radios felt the same weight as their lower-end RTR radios, which gave them a cheap feel. The DX6R does not feel like that.

Weight Distribution- A bit top heavy, but not massively so.

Wheel- The radio comes with two different wheels. The radio comes out of the box with the larger of the two attached. We immediately ditched the larger wheel for the smaller one as that is what most of testers preferred. This took all of 2 minutes and was very easy to do. We were not big fans of the included foam on either of the wheels. The foam was a bit coarse to our touch. Wheel tension is adjustable, but the tension out of the box felt quite natural so that is where we left it.

Trigger- The trigger comes with ribs on the flesh side and is sized to be a narrow fit on most fingers, which we prefer. The general size and shape of the trigger on the DX6R was liked by the majority of our testers. Spring tension is adjustable so we stiffened ours up a tad bit as it felt very light out of the box. Positioning of the trigger is also adjustable and we used it at 3 different positions depending on our test driver’s taste.

Grip- The DX6R comes with 3 different grips. We ran the unit that come stock for the majority of our driving. The rubber grips have a slightly textured feel, not as smooth as some on the market, but that didn’t seem to be an issue for any of our drivers.

Overall- The DX6R is incredibly adjustable. If you don’t like any aspect of its ergonomics out of the box, simply adjust it to where it feels dialed to you. Is the DX6R the most comfortable radio we’ve ever used? No, it is not, but it is very, very close.

Ease of Use- Normally this would be a pretty easy question to answer, but with the DX6R it depends a bit on whether or not you are an avid smart device user. Because the DX6R operates much like an Android based smart device, people who use Android will instantly be dialed, those who don’t will need 10 or 20 minutes of playing with the radio to get used to it.

Features- Ummmmm…. because of the DX6R being Android based, the features are pretty much endless. You have all the typical features like trims, a bunch of model memories, dual rates and expos, etc. Then you have features like Bluetooth & Wifi connectivity, telemetry, and voice alerts. Then you have Android apps like Facebook, YouTube, a web browser for cruising BigSquidRC, ect. All high-end radios have an abundance of features, but the DX6R is on an entirely new level with what it can do.

Driving Performance- On previous models, we felt like Spektrum radios didn’t have a completely flat throttle curve. For instance, some previous Spektrum models felt somewhat softer from zero input to around a quarter throttle than their competitors. The DX6R did not feel like that to us. Its throttle curve felt “normal”. From no throttle all the way up to pinned wide open, the throttle response felt perfectly linear. The same could be said about steering, it simply felt natural. When you spun the wheel a quarter turn, it felt like you got exactly a quarter of your steering travel. We also immediately noticed the speed of the DX6R, it felt as fast as anything else we’ve tried. No matter what type of input we gave the Spektrum, it gave a corresponding response at the car, seemingly with no delay whatsoever. From the best of our memory, the DX6R drove as well, or better, than every other elite radio that we have laid hands on. Drive time with the Spektrum was absolutely superb.

Radio Range- Ya know, if there is one thing that bashers have griped about for years with Spektrum radios, it would be range. We were told by the guys at Spektrum that their newest radios had much increased range, so we went out to a big open parking lot to find out. For range testing we used the SR2000 micro receiver mounted in our Pro-Line PRO-MT and we used an antenna tube to make sure the receiver’s antenna was pointing straight up. How much range did our test unit have? Well, it had more range than our parking lot. We measured a radius of 450 feet, but the Spektrum still had complete control of the truck at that distance. No, we don’t know the exact range on the Spektrum, but at a 900 diameter, it should have more than most bashers will ever use, and is much better than previous Spektrum units that we have tested.

Durability Testing- You would think after years of doing this that we would not cringe when dropping a top-of-the-line radio off the top of the drivers stand down the dirt, but we still do. It was ingrained upon us decades ago to be VERY careful with a radio. We have learned in recent years that that isn’t so much the case. The DX6R also proved to be able to take some abuse without breaking. We dropped it off a 6 foot high drivers stand to terra firma with no problems. We knocked it off a tailgate a half dozen times, still no issues. The moral here is this- from what we’ve seen you don’t have to be afraid of ruining your new DX6R if it accidentally falls off your pit table.

The Spektrum comes with a unique and comprehensive model set-up wizard. When inputting a new model, the radio will ask you several questions to make sure it is perfectly set up to your application. It asks questions like truck name, the exact receiver you are using, gas or electric, reverse or no reverse, etc.

We found that the DX6R was easily tipped over forwards when sitting on a table. The solution is to either keep it on its base, or to simply lay it down leaned fully forward.

After hitting the power button it takes several seconds for the radio to boot up, pretty much like any Android device. Don’t worry though, you won’t be running late for any races as you can leave the radio turned on all day and simply turn off the transmitter app when you aren’t actually driving.

While not impossible, we found the edges of the screen hard to tap and the screen generally not as responsive as a typical Android based cell phone. First world problems, I know.

How long is the run time on the Spektrum? We never found out. Why is that? Because the Spektrum has so many different ways it can be charged. It can be charged off of AC power or via USB from its base. It can also be charged via USB from a port on the top of the unit. We did run it all day several times and still had plenty of juice left, but for the most part when we weren’t driving we had it on the charger.

Yes, for the most part, the DX6R operates a whole lot just like your Android based cell phone. You tap on the screen or swipe to advance to the next step or screen. Yes, you can totally cruise Facebook with the Spektrum. Yes, you can totally watch YouTube videos and listen via the speaker on the side of the radio. Yes, you can totally cruise the web. However, it does not have a microphone or camera (perhaps on an upcoming DX7R?). We missed not having a mic to use Google Voice and would have liked a camera option when entering a new car into model memory or to simply catch some of the mayhem while out bashing. Yes, even more first world problems…

Time To Bash: B If you are a non smart device user, or you are an Apple iOS person, the Spektrum will take a while to adjust to. For users of Android devices, you will feel right at home.

Car Show Rating: B Looks are a huge matter of taste. Some of our testers loved how the Spektrum looked, while some of the others didn’t like it as much as its competition.

Bash-A-Bility: A We did some seriously stupid things to our DX6R and it works as well today as the day it came out of its box.

Range: A We’ve never given a Spektrum an “A” rating in range before, but the DX6R is no joke.

Value: A Value is an easy “A” for the Spektrum. It has superb performance, it has an absolutely insane amount of features, it comes with multiple ergonomic options right in the box, 2 different receivers come standard, and it comes stock with a large Lithium battery and charge base. It simple gives you a Huge amount of bang for the buck.

Big Squid Rating: A- The Spektrum DX6R is a multi-generational leap in technology for radio transmitters. If you are a bells and whistles guy, or a guy who wants to blow away everyone else at the track with the fanciest radio, the Spektrum DX6R is definitely for you. But hey, what about bashers? The DX6R works great for bashers too. It has an astronomical amount of features, plus with its increased range you won’t have to worry about any more walks of shame trying to get your radio to connect. Yes, we are huge fans of the DX6R and think it sets an all new standard for high-end transmitters.