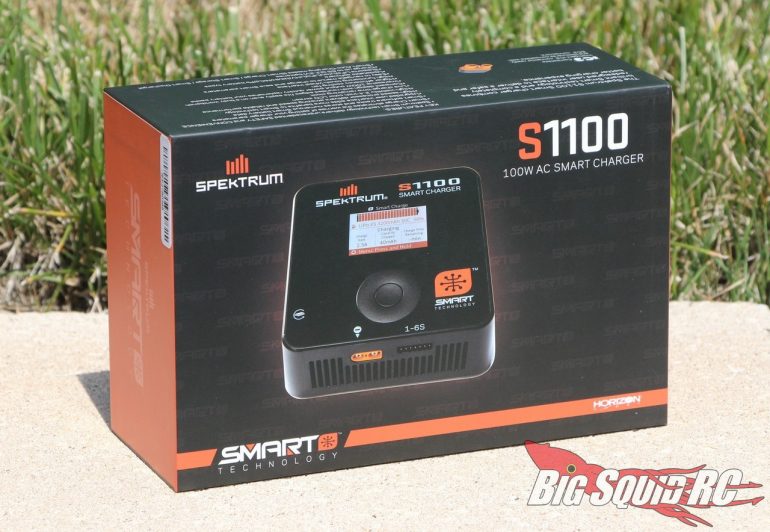 The folks over at Horizon Hobby made big news when they introduced their Smart Technology line-up of products a couple of years ago. The latest product in that line-up is the Spektrum S1100 Smart Battery Charger. We’ve been passing the S1100 around the office for a few weeks to get our Bash Crew’s thoughts on how it performs. How easy is it to use? Does it have plenty of power? Scroll down to read our thoughts on the new Spektrum S1100 Smart charger…

What’s In The Box: Inside the well done packaging you’ll find the S1100 charger, an operation manual, the AC power cord, as well as an IC3 to IC5 adapter.

Build Quality: After allowing the Bash Crew to have a close look at the S1100, we could not find a fault with its assembly. The plastic case was well designed, the power cord was good, the screen was in perfect shape, etc.

Ease Of Use: After we unboxed the S1100, we immediately plugged in a battery pack. Once plugged in, the pack automatically started charging! It doesn’t get much easier than that folks! When you use a Smart charger along with a Smart battery pack, the charger already knows the proper charge rate, thus allowing for the super-easy no touch charging. Once past the coolness of automatic charging, we did venture a bit deeper into the custom programming, which was easily done without having to consult the manual. Overall, the S1100 is perhaps the easiest charger that we’ve ever used. If you don’t have a lot of Smart batteries, don’t worry, you can also charge normal LiPos that are not Smart equipped.

Power: The S1100 can charge at a rate of 10 amps, which is equivalent to a 2C charge rate on a 5000mAh pack (a bit longer than 30 minutes). For most of our charging, a 1C rate is more than plenty, but having the extra power to quickly charge a pack can certainly come in handy at times.

Final Verdict: The Spektrum S1100 Smart Charger is our favorite yet from Horizon Hobby. The S1100 is incredibly easy to use and has the raw power for quick charge times. The screen on the charger is very nice and quite easy to read, and because of its Smart technology, it is one of the safest chargers on the market. We are big fans of the S1100 and can highly recommend it to all you Smart battery users out there.