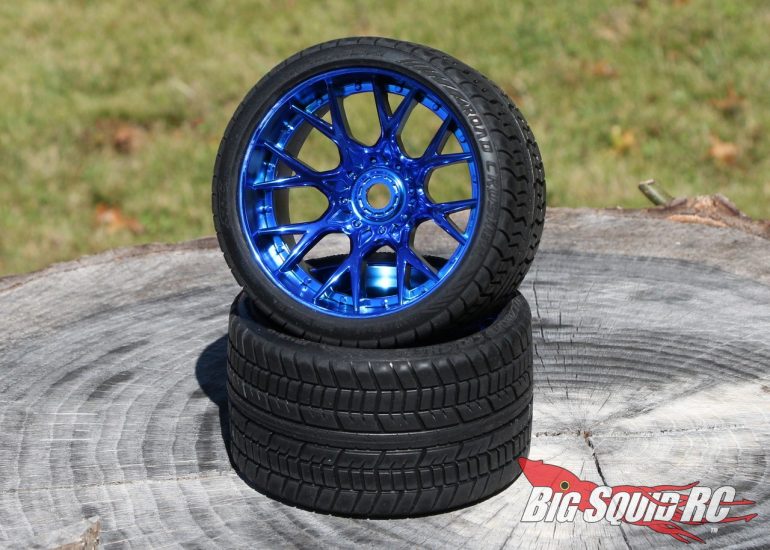 Belted tires are all the rage now days and Sweep Racing has been one of the first to offer that technology to the rc bashing world. Sweep recently announced new limited edition chrome Road Crusher Belted Tires and we could not wait to try them out. How much grip do they have? Do they hold up well? Read on to find out the scoop…

Review By: Cubby
Pictures By: T-Mohr

Primary Competition: Ummmmmmm… for belted on-road 1/8 truck tires, there aren’t many. While more belted tires are hitting the market every day, the Sweeps are one of the rare belted sets designed for dedicated on-road use on a 1/8 MT or truggy.

Build Quality: We had the animals that we call our Bash Crew closely inspect the Sweep pre-mounts for quality. We could find no faults. The tires were very well glued, the plastic wheels were on-point, as were the tires. We found no excessive flash the wheels or the tires.

Set-up Notes: We ran the Sweeps on a true basher classic, the ARRMA Nero Big Rock. As you remember, the Big Rock won the BigSquidRC March Bashness back in 17′ and it still bashes as hard today, as it did then. We ran the Sweeps mostly on the Big Rock, but also got in time with them on a Traxxas E-Revo 2.0, as well as an ARRMA Kraton.

Ease of Use: These things are pre-glued and ready to go! Also of note, the wheel hex area is well done, the wheels easily slide right into place. We switched out the stock Big Rock wheels over to the Sweeps in well under 5 minutes.

Traction/Grip/Driving: The Road Crushers are molded from what we would call a medium’ish tire compound. It isn’t as soft as a “race” compound, but it isn’t nearly as hard as most RTR rubber. Our review set had a bit of mold release on them, but after a couple of 6S burnouts, that was a non-issue and we could really start to feel just how much traction the Sweeps had. For raw grip on hot pavement, the Sweeps have very good traction. Once clean and up to temp, the Sweeps transformed our Big Rock into an on-road missile.

What about off-road? You can drive off-road with the Road Crushers, but you won’t have much grip. If off-road is your thing, Sweep makes a version called Terrain Crushers that has a much deeper and more aggressive tread.

Like any belted tire, you’ll probably want to gear up a bit. The Road Crushers are fully belted and do not expand, thus meaning your truck could have lower overall gearing compared to tires that balloon. We went up three teeth on the pinion of the Big Rock to get some bark back to the power system.

Belted tires tend to be firmer over bumps than non-belted. This can make your truck tend to hop and skip a bit over bumps and small rocks compared to non-belted. We ended up going to a lower weight shock oil to plush up the suspension a bit to compensate.

Final Verdict: The Sweep Road Crushers look incredible and perform great. They had close to zero tire expansion and allowed us to drive our monster trucks faster than ever before on pavement. We loved our test set and can highly recommend them to you!