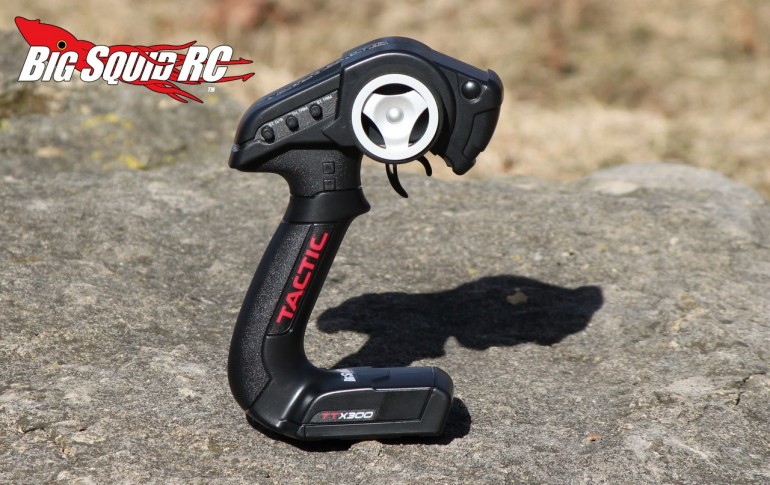 Sometimes you have a RTR transmitter that you just can’t stand, sometimes you just need a simple radio for a project that you are working on. Those are just two good reasons that the Tactic TTX300 is on the market. We’ve been beating on a review unit for weeks now, keep on reading to find out how well it worked and if it is truly worth your hard earned cash…

What’s In The Box- Transmitter, receiver, and manual.

Build Quality- After popping the Tactic out of the box we found it to be well built with no issues.

Feel In Hand- We had no complaints with the feel of the Tactic. No, it didn’t have the feel of a $500 radio, but overall its ergonomics were very usable. The relationship between the wheel/trigger/grip was much better than numerous RTR radios on the market. The wheel was foam covered and felt quite comfy while the trigger was snug, but not too tight, on the throttle finger. The trigger was a bit squared off for our taste, but not so much as to be uncomfortable. The one area it was lacking was the grip, which was made from hard plastic. The grip itself was fairly comfortable, but a soft rubber covering would have been nice. Also, the TTX300 is very light. If you are on an all night trail drive its lack of heft can be a big plus. The Tactic might be a tad bit top heavy, but because its overall weight is so low it was really hard to tell.

Ease of Use- With minimal features and coming bound to its receiver right out of the box, we found the Tactic exceptionally easy to use. The trims and other basic features are easy to get to (and use), transmitters don’t get much simpler to use than the TTX300.

Features- The TTX300 is a base model radio, hence the reason its list of features is short. It has a user programmable third channel that can be used for things like a winch, lights, or shifting, and it has basic features like adjustable steering rate, trim and end point adjustments. About the only other feature it comes with is the ability to change the throttle over to a 70/30 ratio.

Glitching- We experienced no glitching with the Tactic. It was rock solid at distance, just like it was around numerous other radios, driving directly under a cell phone tower, and while being driven indoors around various other electronics.

Driving Performance- There are a number of RTR radios coming in cars now days that have “weird” throttle and steering curves. We found the Tactic to be very smooth and linear in forward, more so than most RTR radios on the market. Brake was nice and linear as well. Reverse seemed to have more bite right off the bottom than we thought to be linear, but overall it drove well. No, it doesn’t drive as smoothly as a high-end radio like a Futaba 4PX, but we did feel it put a number of RTR radios to shame.

Radio Range- Radio range is impressive on the Tactic. No, it isn’t high-end Futaba sort of long, but it has more than enough for bashing, and more than several RTR radios we’ve tested. We stepped off range at a radius of 860 feet.

Durability Testing- After numerous drops to concrete our test unit still looked and functioned like new. Also of note, many transmitters will at least pop off the battery lid when accidentally dropped (read- thrown) on a hard surface. The lid on the Tactic is quite tight and stayed put on all but the most severe slams.

The receiver that comes with the TTX300 is quite small and does not have an antenna wire. Despite not having an external antenna we never had an issue with range or glitching. Not having a receiver antenna wire is quite nice, it keeps your wiring cleaner and there is no chance of it getting wrapped up in a driveshaft or spur gear.

Speaking of that receiver, spares will only set you back $24.

We used the Tactic day-in, day-out for several weeks without issue. It was just a solid unit that didn’t do anything spectacular, it just did its job. The only thing that did get the BSRC Bash Crew talking was its looks. The TTX300 has a unique look that some testers liked, but others were not thrilled about.

Iron Mike is our resident non-tech guy, he is the guy that can’t program a speedo to save his life, nor can he navigate through the menu on most high-end transmitters. Needless to say Mike was a big fan of how easy to use and how affordable the Tactic was.

Time To Bash: A They don’t get any faster to set-up than the Tactic.

Car Show Rating: C The TTX300 has “love-it or hate-it” style looks. Our test crew was split down the middle, hence the “C” rating.

Bash-A-Bility: A Our review unit had a VERY rough life and still works fine today.

Range: B The TTX300 has very good range, more than enough for most normal applications.

Value: B Coming in at only $49, our testers thought the Tactic was a good value.

Big Squid Rating: B+ We found the Tatic TTX300 to be a solid radio and we can highly recommend it to you. The TTX300 can take a beating, has good ergonomics and range, and is drives quite well, pick one up if you are looking for an affordable radio.

Posted by Cubby in Accessory Reviews, Transmitters on Thursday, January 22nd, 2015 at 6:41 pm