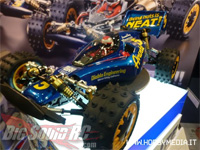 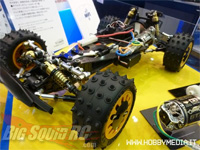 Our friends from HobbyMedia.it just got back from the Tamiya Fair in Japan, and have sent a few pictures. The Tamiya Avante, a 1/10th scale electric buggy re-release. The original was released around 1988, and the re-release was in 2001. Does that make this a re-re-release? Every once in a while, I’ll see someone rebuilding theirs. Now you can buy a new one again. I really like the body with the driver inside! It also had a very unique suspension setup.

You can see a few more pictures on their site here.

One of our loyal readers sent in a video link from the original. Check it out after the break..


Thanks for the heads up Bill!