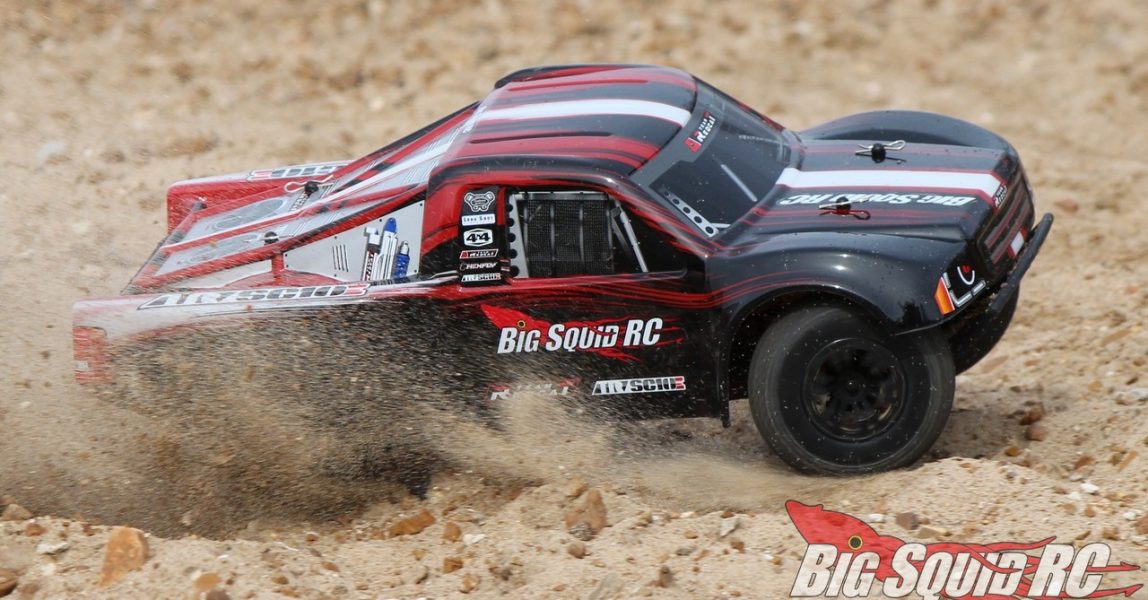 New from Team Redcat is the TR-SC10E short course truck. As this truck is part of the Team Redcat line-up, it is aimed at the serious basher. We think you know the type, guys looking for serious brushless speed and a chassis that can handle it. We’ve been thrashing the Redcat for several weeks now, what did we learn? How fast is it? How does it stack up against its ultra-tough competition? Read on to find out…

Primary Competition: Oh yes, the Redcat faces all sorts of fierce competition like the Losi SCTE, the Traxxas Slash 4×4, the ARRMA Senton, etc.

What’s Needed To Complete: Not a lot. You’ll need four AAs for the transmitter, plus a pack for the truck and a charger.

Build Quality: After passing the Redcat around the room, our test truck had two small issues. The switch to the speedo had fallen off during shipping and the servo saver was far too loose. Also, the right height out of the box was a bit below where you want it (unless you are racing carpet). Spring pre-load shims do come in the box so you can properly set the ride height before driving.

Test Venues: We used Minnie Ha Ha park in Fenton Missouri for the majority of our testing. We also used our local Costco parking lot for speed testing and the St. Louis Dirtburners track for jump testing.

Set-up Notes: After raising the ride height a bit before driving, we used a 2S MaxAmps LiPo to give the brushless system serious amounts of juice.

Driving: Yes, the Team Redcat TR-SC10E drives like a full-on race truck. Seriously, it corners impressively well, and jumps even better. In corners, the truck gets loads of mechanical grip, thus giving the truck lots of corner speed. The truck is also “easy” to drive fast in corners, as well as the rest of the track. Also, it tends to give the driver some warning before swapping out, instead of just snapping around like some trucks can.

On the jumping side of things, it has a center diff and a brushless power system. Both of those are great things to have for controllable jumping. We found the Redcat to fly perhaps a bit nose low, but typically it was top notch for a short course truck. It was much easier to jump than any 2wd SCT, and we thought it would be among the best compared to the top racers in its class. Now, for hard bashing, it is sprung and damped on the light side, but for normal driving or the track, the suspension is very good right out of the box.

What about grass and pavement? A couple of more wows are in order. No, the Redcat was not designed for pavement, but it was a beast when racing around the cul-de-sac. Tons of power, loads of corner speed, and it rarely traction rolled, very nice. The same could be said for driving on grass. That 4wd power-train mated to all that brushless power allowed it to absolutely fly through normal height grass.

When going out and doing “goof around” driving, we loved how it drove. The tires were always chewing for more grip and whenever we thought we were getting in big trouble headed for a curb, a twist of the wheel would typically get the truck turned before hitting the curb, instead of flipping over or still tagging it. The TR-SC10E absolutely ranks with the top of its class for overall driving experience.

Power: After some slight cogging from a dead stop, the low end kicks in hard giving the Redcat tons of roost hucking ability. The truck screams though the mid-range into a top end that has a ton of raw power, plus it feels like it wants to keep pulling forever. Out of the box the Redcat is geared for 2S, and not conservatively. Our GPS showed the truck capable of pulling 42 mph on 2S LiPo, which definitely feels plenty strong. To boil it down, if you are looking for serious brushless power, the Redcat has it, but keep an eye on temps.

Radio: While not fancy, the included radio was solid for a RTR unit. It was easy to use, it never glitched or ran out of range, it just did its job. Also, for ergonomics, we didn’t hear many complaints from the bash crew.

Broken Parts: We found our test sample to be quite durable. Even with a ton of power under the hood we still didn’t break many parts. Normally we take it easy for a while before we start trying to break things, but all that brushless power pretty much made the truck impossible to drive slow, which is a great thing for the heart rate, but bad for parts. In the end, we broke a front tie-rod and a shock end. Not bad for the amount of abuse we put the truck through.

Do you like brakes? If so, the Redcat has plenty. We were pulling the rear tires off the ground when slamming on the brakes on pavement. Their progressiveness felt fine and easy to use, just know at the 100% mark they can stop the truck, and then some.

We didn’t crack the center diff open to see what was inside, but ours needed heavier oil. The truck center-diffed-out like crazy when pounding the gas, which was basically all the time.

The Redcat comes with a waterproof 15KG servo and it worked fine for casual bashing. Torque is decent, while its speed is usable.

In the manual it tells you to cover up the vent holes in the wheels before running in water. We did not, nor have we ever, but yes, if you run your truck in water, the foams will not be long for this world (we found out the hard way).

Speaking of water, while the TR-SC10E is said to be waterproof, our truck did not like water. We did a small amount of water driving and afterwards we had electronics issues. After one water pass the servo stopped working, but after drying it worked fine again. The second pass through water caused the ESC to shut down, but once it was fine after drying out.

A Deans connector comes stock, rejoice! Kudos to Redcat on that one.

Best Mod Under: Wheels and tires. The rest of the truck is solid, but our test truck is just screaming for a set of Badlands SCs from Pro-Line.

Time To Bash: B The Redcat had a pretty normal set-up for a RTR. Charge up a pack, put in some double As, set the ride height, then hit the back yard.

Workability: B The Redcat uses a fairly standard 4wd SCT layout that makes it quite easy to wrench on. The truck comes with decent hardware too.

Car Show Rating: B In an age that is all about scale realism, we thought the Redcat looked good for a short course truck. As always, we would have liked to have seen more scale type items, but especially in the tire department. The stock tires are a race tread, but a scale tread would have looked better in our opinion.

Bash-A-Bility: B Our truck was plenty tough. We bashed it hard with very little in the way of breakage.

Fun Factor: A The Redcat was loads of fun, definitely near the top of its class. Quite simply, it has a wonderful blend of serious power and track tuned handling.

Handling: B While the Redcat is tuned more for the track than for hardcore bashing, it handles really well just about everywhere. It always seemed to beg for more, making it a truck that wanted to always be pushed harder.

Value: A From our experience with the Redcat, we feel like it is a great bang-for-the-buck.

Parts Availability: C No we didn’t find many parts locally, but yes we easily found them on-line.

BigSquid Rating: B+ The Team Redcat TR-SC10E is a strong truck, one of the best in its category. It takes a beating, it is loads of fun to drive, and it doesn’t destroy your wallet.