Tech Talk: Servos, the Analog and Digital of It 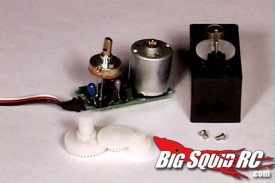 Hello, and welcome to the very first BigSquid Tech Talk! Often I get RC people coming to me asking why their servos burn out, don’t perform well, or has a strange hum when doing nothing while powered on. Honestly, it comes down to the simple question: What is the difference between analog and digital servos and what does that mean for my RC vehicle/aircraft? See the facts and the comparisons between the two servo types after the jump…

The difference between analog and digital servos is in the response it has from an input, which then has specific implications for your RC. An analog servo responds to an input in a single short burst which sets the servo horn position, and then shuts off the motor at that position. This happens approximately 50 times per second, and is standard for all analog servos. These short bursts do not product that much torque and usually is not representative of the statistics written on the box of your analog servo. Also, analog servos sometimes burn out with digital radio systems, but only  when the radio settings send data to the servos at rates higher than 50 times per second. Due to the motor shutting down between pulses, there also is slop in the servo horn when you try to move it physically: it will give a little before the servo responds and attempts to hold position. Analog servos are still good for airplanes, as it deals with many external forces in the wind and the minor slop will provide some stability. Also, analog servos are good for single position uses, like aircraft flaps, doors, or other simple tasks. 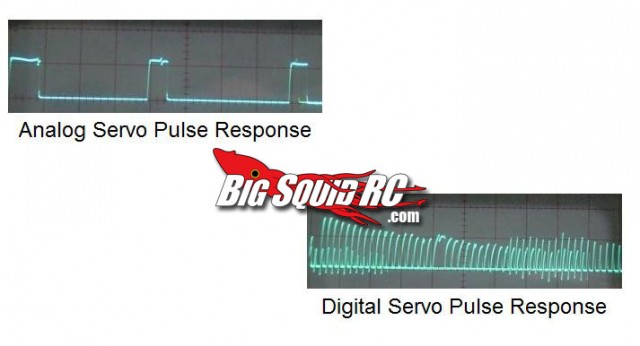 Digital Servos on the other hand, use micro processors to interpret input data and send precise signals to the servo motor to provide exact position data. Digital servos can receive up to 300 data pulses per second, and the motor never quits. That hum you hear? That is nothing more than the servo responding to minor resistance being applied to the servo horn from some source. If you try to put external pressure on the horn, the servo is alive and kicking and you will find no slop in there! Digital servos also can have their end points adjusted with help of the radio, as well as provide large amounts of torque in a small package. The only drawback to digital servos is the constant computing and motor work within the servo is much more of a power drain compared to analog servos, so in the case of nitro/gas RC receiver packs will encounter shorter lifespans before replacement or recharge.

Have a question in RC Tech? Shoot me an email to kevin (at) bigsquidrc (dot) com and it may end up on Tech Talk (but no matter what you will get an answer). Until next time, Bash BigSquid Style!