Are you as addicted to your Facebook feed as I am? Yes, of course you are, so isn’t it interesting to watch the rc community post loads of updates/comments on the Feld/AMA Supercross series every Saturday night? Brian used to give me so much hell for even bringing up Supercross in THE Cub Report, but it’s quite obvious from my Facebook feed that everyone from club racers to those that make and shape the rc landscape are glued to Supercross. No wonder Traxxas, Losi and other rc companies chose to support it.

With that said, what a race Saturday night! Of course In the big boy class RV once again showed he wants it the most, Reed showed he’s still in the hunt, and well, the COW showed how hard he can crash. Also of note, Hart & Huntington rider (and BSRC fav) Josh Hansen poured the coals on for his first top 5 of the season, heck ya! In the small fries class Eli “the ET” Tomac has been inhuman and virtually had the title locked up (and was arguably the fastest rider in both classes), but… last night he crashed hard while WFO in the whoops, making the West Coast Lites a lot more interesting when they return to battle in a few weeks.

Next week the Supercross roadshow moves “East” (yes, I know Dallas is the Midwest, but it’s considered an East coast event), where we get our first look at the 2012 East Coast Lites. This is good for rc, as Bubba’s lil bro Mookie (aka Malcolm Stewart) will be laying down the smack with his 250. If you aren’t into moto, Malcolm has been in some HPI/HB ads, and he digs rc. The Monster/PC/Traxxas team will have Blake Baggett and Darryn Durham on track race’n for the title. See Brian, I can always tie sx/mx into rc in some way. 🙂 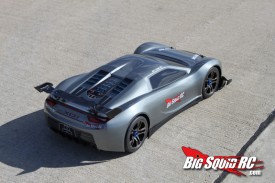 So… the entire BigSquidRC Bash Crew has been driving the p!$$ out of our Traxxas XO-1 supercar. I suppose if you are a normal media outlet Traxxas sends you an XO-1 to take pictures of and to play with, then you write a kiss a$$ review, make sure Traxxas approves it, then hit print. Thankfully we are Not a typical media source.

Traxxas didn’t send us an XO-1, we had to cut the check and buy one, just like you guys. And just like you guys, we are driving it like we stole it (read- wide open bash sessions, slam’n curbs, hit’n double jumps, etc). And just like you guys, we didn’t drive it in p*&%y mode like it comes out of the box, we immediately jumped through the hoops it took to set it up for “100 mph”. Brian, Wrench and the rest of the crew is going to keep on bashing the XO-1 for a couple more weeks, expect the full scoop in their review, but here are a few quick observations I have about the “fastest car on the planet”.

The XO-1, even when set up for 100 mph, feels really soft in power from zero to half throttle. Obviously, Traxxas made the car as easy to drive as possible, but when a bone stock Traxxas 4wd Slash feels like it has a lot more rip through the first half the powerband, you are left feeling disappointed. I mean, after you fork out $1200 for an rc supercar you are expecting Shocking amounts of power across the entire board. It’s a bit like paying sticker for a Ferrari that only has the power of a Prius from zero to half throttle. Thankfully, above half throttle the XO-1 is a rocketship, with insane power to spare.

Anyways, that’s as far as I’m going to go on the XO-1, look for a very revealing Full review from Brian and the rest of the Bash Crew in a couple weeks! (Nice teaser eh?)

Also in Traxxas news… last week I reported that the new 16th scale Grave Digger was 4wd, when in fact it only comes with 2wd. So… the full scale Grave Digger is 4wd, the 16th scale Traxxas platform the truck resides on is 4wd, so why did would Traxxas castrate it back to 2wd? They have their reasons of course, but I wonder if they realize that core bashers aren’t feel’n any love for a wanna be Grave Digger?

Our latest Lipo battery shootout is nearly here. So who’s going to be in it? So far we have a very intriguing group that consists of- Traxxas, Gens Ace, and HobbyKing. Once we line up a couple of more brands we’ll begin the testing. We are testing 2S 5800 mah packs this time around (or as close to that as we can get). If you are a company that wants in, contact Brian at BigSquidRC dot com as soon as possible.

Last Wednesday night we held our first “SmackFest” over on our forum. We had a ok turnout, but it was a blast. I’d like to personally invite anyone and everyone to come hang with us again this Wednesday night at 10 pm CST in our general forum. Ask questions, crack jokes, talk smack, post wacky pictures, or just hang out and lurk, it’s all about bashers having a good time.

That’s it for this week rc nation, thanks for reading and support your local hobby shops, tracks and bash spots!