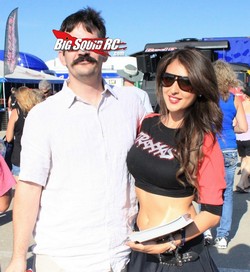 Recently, a big name IFMAR World Champ walked out on a race. After practice, he decided to picked up his stuff and just go home. Sounds like a uncool thing to do? Sound like a quitter to you? It might sound that way, but the racer, Jared Tebo, was worried about the health of his family, that’s why he loaded up and went home. You see, he was at an indoor track where everyone was using tire sauce. What he did has subsequently set off “tire gate 2014”.

If you are just a basher you might not know, but at many track across the world, racers rely on tire sauce to get better traction and to lower lap times. Tire sauces have been said to be a “toxic stew” of chemicals that both clean and soften tires. When used at breezy outdoor tracks, you never notice them, however, if you are trapped at an indoor facility for days on end, they can affect even the most hardcore of racers. Personally, for years I was a zombie racer-type that just accepted the fact that the skull splitting headaches and nausea was a part of competition. And I wasn’t alone, there are hundreds, heck, thousands, of racers that sit in pit areas every weekend breathing God knows what for hours upon hours.

No, there have been no studies on the effects of tire sauce fumes on the human body, but it only takes common sense to know it can’t be good. Yet… the racing community has ignored the health hazard in exchange of faster lap times. Tebo showed leadership and decided it wasn’t worth the risk, when will race promoters and sanctioning bodies man up and outlaw tire sauces???? Cutting a tenth or two off a lap time while racing a toy car is not worth the potential health risks. Ever, Period. Tebo- thanks for the wake-up call, industry- time to get your s**t together, and racers- time to Wake Up!

On to BSRC news…

Hey, as I am writing this there is only 4 days and 22 hours until the BigSquidRC Quadcopter Championships presented by Ares, Blade, and Heli-Max, and ESTES. There are a ton of questions behind this event, like- obviously quads are a sales floor darling, but will anyone show up to actually compete with them? The Bash Crew has built some pretty cool obstacles for the competition and we’ve got some SIC looking trophies for the winners, but we honestly have no idea if 3 people are going to show up, or 300. Of course the Bash Crew will be there, as well as some industry types driving up from the greater Champaign area, and of course you, yes You, are cordially invited to join us too. Just grab a quad, grab $5 for an entry fee, and prepare to be a part of something new and trend setting. Oh and, if you win, not only do you win a trophy, you’ll also win a brand new quad and, you & your quad will be featured on the front page of BigSquidRC (read- instant Rockstar status).

Lastly… we have a big review coming up later this week, the 5th scale Losi Desert Buggy XL. As a teaser I will say that it definitely took a while to get started, but once going, we had a blast and even hucked it off a roof, not once, but twice, AND it drove away both times. To read the full review keep your eye on our front page later in the week.

That’s all I have for now, hope to meet a bunch of you guys this weekend at the Quad Championships, and support your local bash spots and hobby shops when ya can.