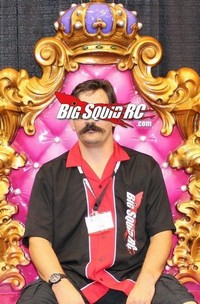 RV2 lost the overall at the AMA national over the weekend, but nobody beat him. By that I mean he still pwn’ed the field, but defeated himself by going down twice in the second moto. That destroys his chance of going for a perfect season like RC and Bubba had, and perhaps gives the field a little bit more motivation to keep training/practicing. But still, until a rider actually steps it up (achtung Bam Bam and Dungey) to run his pace the rest of the nationals are going to be real snooze-fest.

Moto fast guy Jeff Alessi is a big fan of rc and he’s racing over in Italy right now on a very trick Honda 350 (you read that right, 350). Here’s to sending the 801 some good luck and we hope he races his way back into shape to win some motos. It would be freak’n awesome to see the 801 with a good ride back here in the states next season.

On to the rc world…

The biggest news from last week? For old school rc’ers it would be the announcement that Team Associated is going to re-release the original RC10 Gold Tub buggy. Sounds like an awesome idea right? Right?

Yes, it has great idea written all over it, but I’m just not sold on it. You see, myself and several of my racing buddies have said for years that we were going to buy old gold tubs, get them up and going, and race them vintage style. Sadly we never have, mainly because there just wasn’t much motivation there. We’ve all already owned several of them back in the day and none of us have the spare time to get one up and going. Plus, there are just too many cool new cars to snatch up and drive. So while old school rc racers might be the prime targets to buy the re-release, if we haven’t found the motivation to buy one over the last twenty years, I’m quite sure we can find a better way to spend $250. Because so many were sold originally, Gold Tubs have been easily found on E-Pay and Craigslist at bargain prices for years, yet none of us have actually cut the check. Ya sure, the Gold Tub was the best of its kind back in the day, and ya sure, they bring back a lot of memories, but is that really worth $250 today? Not to me or my “racer” buddies. I hate to even mention my basher friends, they could really care less about a Gold Tub.

So… collectors should snap up the RC10 re-release right? I don’t think so. You see hardcore collectors want the real deal, the original nearly 30 yr old buggy, not a flip’n “re-release”. The collector I talked to was ticked off and cursing AE because now the market is going to be flooded with all the new buggies and parts, thus screwing up the market on the old buggies as well. So ya, I think you can scratch the true collectors off the list of potential buyers.

How about those guys out there already racing vintage? Just how fair is it that someone can go out and buy brand new parts when the other guys are spending weeks or months scouring E-Pay, Craiglist, and forums trying to find the parts to keep their old Kyosho or Losi up and going? How fair is it that somebody can show up with a brand new and fresh buggy and race against equipment that has been driven to death for years? Ya, if you are “that dude” that shows up with a brand new re-release Gold Tub to a vintage event expect to catch a lot of crap.

Maybe noobs want to relive the past and see what driving a historic car like the Gold Tub is all about? They must be curious right? Yes, I believe that every noob would benefit from a good solid taste of vintage rc to help them appreciated how good today’s product is, but how many are actually willing to pay $250 for that chance? Would a noob rather have an old school Gold Tub or an ECX Boost that drives better, is much more durable, comes RTR, and only costs $149? Ya, just how many noobs are willing to pay nearly twice as much for something that isn’t as good just to get a perspective on the past? I suspect not very many…

To boil it down, ya, re-releasing the Gold Tub sounds like a great idea on paper. However, it just goes to show that AE is fading into the past, not charging into the future. When AE’s biggest news this year is a vehicle from 30 years ago, something is dreadfully wrong. AE has a truly iconic past, they should let it stand, proudly as it deserves to be. Instead they take the “easy” way out to make a few quick bucks selling a re-release. The hard way is to put their resources into making brand new uber products to replace their terribly aged current platforms (hint hint B4/T4/SC10), but I guess they just aren’t up that challenge anymore……….

Don’t forget to check out our review of the Vaterra Glamis that goes up later today, our G+ Live show on Wednesday night, and our daily news up on the front page. Also, you can find the BigSquidRC Bash crew at the Stadium Super Truck event in St Louis this Saturday, and bashing with the St Louis Drag Club on Sunday. Shoot us an email if you want more information on how to meet up with us, to bash, or to just say hello.

Until next week, support your local hobby shops and bash spots.