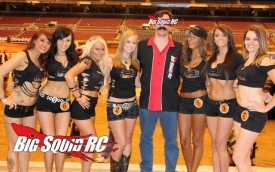 Hello all you rc hobbyists and industry types out there, it is Monday and welcome to this week’s Cub Report.

I haven’t talked moto for a while because it is the off season, but 2014 was looking to be a great year. Unfortunately… lady injury has reared her ugly head and already taken out 2 of of the top guys for the season opener. Davi Millsaps got his knee/leg all fixed during the outdoor season, only to tweak his knee practicing for SX. Davi was killing it in ’13 with a messed up leg, many industry types were looking for him to give RV a real run for the money in ’14. And last week word came out that Trey Carnard broke his arm. Trey has had a long string of serious injuries so I wasn’t surprised to see him riding somewhat conservatively in ’13 to keep from being injured. Fully healed and ready to jam Trey could have given RV2 fits in ’14, but it appears that once again Trey will not be at full mast for the SX season. With Trey and Davi injured I can only hope that Dungey takes it up a notch this season. RD5 is incredibly fast and consistent, but it’s been a long time since he ran down and passed RV2. Bubba won the Monster Cup and looked good doing so, but as far as I know he still hasn’t had his knee repaired, and while still fast, he just hasn’t had “normal Bubba speed” since it got jacked up. “Sigh”, 2014 is looking like another runaway for RV2…

Yes, I could ramble on about moto for hours. I can’t say the same about rc racing. There are just too many “big” rc races, no off-season, and even the “big” races seemingly don’t mean much now days. How much can this weeks big race mean when there are 2 races next week just as big??? Or how much can this weeks “national” race mean when it gets the exact same amount of coverage as one of the other dozen nationals?? So…

After a several requests, I thought I would go old school Cub Report, basically commenting on the weeks press releases. So here ya go…

* Kyosho has been putting out some really sweet looking Mini-Z cars lately, and ya, I’m sure they are huge hit in Japan. However, America is all about tenth scale, and we have a whole lot of dollars to throw around. Since leaving Hobbico, Kyosho hasn’t been exactly flying off hobby shop shelves, but… if they put out as gorgeous of tenth scales as they have been putting out for Mini-Zs they might start moving some product in the States.

* St Louis company Pit Bull Tires are putting out some new short course truck tires. That might be notable because they are known for scaling/crawling tires and these are their first tires for the masses, but perhaps more importantly their new tires come with ribs inside to ward off the dreaded pizza cutter effect. I can tell you first hand that one of the big name tire companies has been putting a lot of time and effort into ending tire ballooning, we’ll have to get our hands on a set of the Pit Bulls to see if they’ve come close with their internal ribbing.

* The TORC off road series announced their schedule for 2014, but what industry types are really waiting for is the announcement of their new series sponsors. I also know first hand that one of the 3 biggest names in rc would really like to get involved with the TORC series, whether or not it ever happens only time will tell. The TORC series has seemingly lost a lot of steam from ’13, I wish at some point short course truck racing would get its act together. They’ve never been able to keep a series going for long. There is a reason why the racing has been so divided between West Coast and Crandon, hopefully at some point they get it together.

* Did ya see that RC4WD got a licensing deal with Warn winches? Ya, if you aren’t a scaler you could probably care less, but even if you don’t scale you have to admire how hard RC4WD is going at it right now. For the genre the Warn licensing is a big dealio, for the rest of the industry you have to wonder how well they could do if they concentrated their efforts on scale buggies or SCTs.

* No, I have not forgotten, the biggest news of the week would have to be the announcement about Horizon and their ownership situation. I am “tight” with several people there and even after talking with them I didn’t get much info. The employees were called down to the DC the morning the PR went out and were told about the future of the company, so they didn’t have a whole lot of advanced notice about it. The staff in Champaign were told not much would be changing and that the changes coming would be positive. Of course some of the forums went into full meltdown mode after the announcement, with people speculating wildly (isn’t that my job? WTH? LOL) that ECX, or Vaterra, or Losi, were already on the cutting block. IMO, Horizon doesn’t distribute as many car manufactures as they used to, so they need all 3 of those in-house lines. Some would argue that this line or that line has been under-performing, and while I would agree that the Losi line is a bit of a mess at the moment, ECX is laser beam focused as an affordable/noob/basher line, while Vaterra makes an excellent scale line-up. I have no idea if or what the changes at Horizon will be, but like any company, there are always changes ahead, that’s just how the world turns. I will say that from first hand working with various team members over at Horizon, that they definitely care more about the bashing market than I’ve ever known them to.

That’s it for this week ya freaks, look for our review on the Axial Jeep G6 this week, perhaps a mini review (or two, or three) this week, and as always, support your local hobby shops and bash spots when ya can.