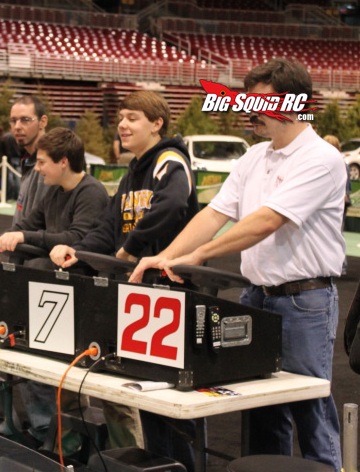 THE Cub Report, Version- In Kinwald We Trust

Ya know, racing is a significant part of our hobby. In fact, it used to be uber important. Now days, or at least since most people started using the internet, that has changed a bit. In the old days dinosaur media made it seem like everyone raced, or at the very least everyone should be racing. Thankfully, thanks to the internet, hobbyists found out that most people were just like them, bashing in the backyard or local park. Anyways, one of the most prestigious races in our hobby was held last weekend. Seeing as how there are a lot of good friends of mine that do still race, I thought I would talk about it in this week’s Cub Report.

What was the race? It was the ROAR 1/10th scale electric off-road nationals. I know that title has a lot of qualifiers in it, but then there are a bunch of different ROAR nats, so they are required. The event was held in Omaha Nebraska at the HobbyPlex. The HobbyPlex is part of a HobbyTown USA location and is well known as being one of the best indoor facilities here in the USA. Once again FroBoy and his crew did a fantastic job of track prep, basically doing up the track like what is expected in this day in age- fast, flowing, and high bite.

So who won? The biggest winner of the weekend was Horizon Hobby/TLR. Horizon drivers Dakotah Phend (who also drives for Pro-Line) and Ryan Maifield were on point all weekend. Phend won the most prestigious class, 2wd buggy, and stadium truck (they still race that?). Maifield took home the win in 4wd buggy. Associated didn’t have the best of weekends, although Cavalieri did manage to win 2wd SCT. Over at Kyosho, Tebo is always a force to be reckoned with, but last weekend only saw him podium once, and that was in stadium truck (seriously, that is still a class?). To boil it down, Horizon dominated the nats over the weekend. Props to them, they have certainly been putting in the hard work that it takes to do so.

So… with BigSquid being a bashing website, why even bring up race results? Because a bunch of people put in a lot of hours to hold the event, a lot of racers poured their hearts and souls into it, and even more people put in crazy hours developing the cars/trucks/motors/batteries that were used. When you go to make your next car/tire/battery/ESC purchase, it would be a good idea to support the companies that put so much effort into racing.

Also… with racing becoming less of a factor every day in our hobby, I thought I would post some results to give racing a bit more exposure, it can certainly use it. And as consumers, maybe it might convince you to drop by your local track. You might not be interested in racing, or you might get yelled at for even walking in the place wearing a non-racing rc t-shirt, but hey, there are still a few good tracks out there, maybe you are lucky enough to live by one. Even I still enjoy racing every once in a while. If you are starting to grow tired of hitting up the same local bash spots and have a competitive streak, you just might find a new home at your local track.

So there ya have it, another Cub Report is in the books. Have a great week and support your local hobby shops and bash spots when ya can.