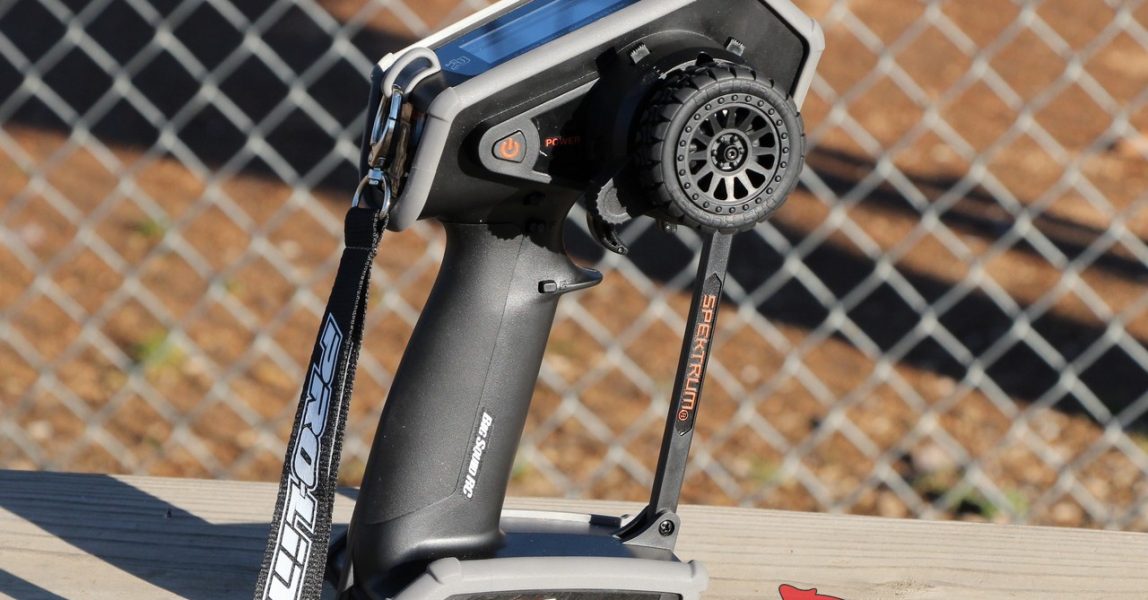 Our industry is changing, and doing so in a rapid fashion. RC enthusiasts, especially those in the scale crawling and bashing scenes, have been longing for a radio that is tough enough for their hardcore driving activities.

With that said, the Spektrum crew over at Horizon Hobby has dropped the DX5 Rugged. Based on their DX5 platform, the engineers at Spektrum went WFO with the Rugged to make it water resistant, and to make it the toughest radio ever. We know that you may have already seen that the DX5 Rugged is BigSquidRC’s 2018 Product of the Year, so you know we are already huge fans of it. However, why not scroll on down to find out what it is really like to use one of the most bad ass radios to ever hit the rc scene…

Review By: Cubby
Photography By: T-Money

What’s In The Box- You can get the Rugged transmitter and a receiver (#SPM5200). Our test unit was just the transmitter, so inside the box was the radio itself that came along with a small “manual” of sorts.

Build Quality- Ummmmmm, we had a lot of people inspect the DX5 Rugged. From our normal test crew, to hobby shop owners, to guys hanging out at the local track, they were all biting at the bit to “get a feel”. At the end of the end of the day, pretty much everyone felt like it had the best build quality and “feel” that they had ever experienced from a Spektrum radio.

Test Venues- I think a better question would be where did we NOT test the Rugged, LOL. We used it in cold temps, hot temps, underwater tests, and high flying tests. Also, we tested at a dusty track, an incredibly muddy track, several parks, a half dozen parking lots and backyards, plus around 100 hours out on the trail. We’ve had a pair of DX5 Ruggeds for a couple months now, and you just know we did not take it easy on them.

Feel In Hand- Here we go folks, this is where it gets good. What is it like to actually hold a Rugged? In our opinion, the Rugged has the best overall feel of any Spektrum radio to date. How is that? The Rugged sports nearly perfect weight distribution to go along with a terrific grip/trigger/wheel relationship.

The back of the grip is rubber, while the front is the newer (slightly smoother) plastic that Spektrum has gone to in recent years.

No, we don’t normally prefer rubber on a steering wheel, but for applications like the Rugged where water (and lots of it) can be commonplace, the aggressively treaded stock wheel does a great job.

About the trigger, it is what we would call a “medium” fit. It wasn’t too tight, nor too loose, for the majority of our test drivers. Our last note about the feel of the Rugged was its weight. Spektrum had said that it was a lightweight design, and while it is not heavy, it feels like it has the weight of a $500 radio. And yes, it is one of those radios that just feels “like it is worth some money,” as said by one of our test drivers.

Ease of Use- Overall, the Rugged wasn’t hard to use, but its touch interface wasn’t as easy as other Spektrum radios (where their DX6R leads the pack). And by not as easy to use, we mean that the touch interface took some getting used to, and its small area made it hard to use for bigger hands. There is a reason for that though, the Rugged needed to be water resistant, so its touch interface buttons are of a different design, a bit more “rugged”. None of our test drivers had a problem programming/setting-up the Rugged, but the switch itself made life a bit more difficult than what we are used to from other Spektrum radios.

Features- Here we go, the Rugged is not playing around when it comes to the cool stuff! The DX5 Rugged is no doubt loaded to the gills with features, with many of them specifically designed for rock crawling, custom builds, and bashing. From a huge model memory, to its hidden storage area, to its one handed steering thumb lever, a water resistant design, etc, etc, etc. The list is long, but we are stoked to report that every feature that we used worked quite well. And while the Rugged might not have all the features of Spektrum’s top-of-the-line DX6R, it has multiple features that the 6R does not, making it one loaded hombre for scale rock crawling or for general bashing use.

Glitching & Range- We had no issues with range or glitching for the duration of our testing. The newer Spektrum gear has the crazy range that you need for speed runs, and the DX5 Rugged shares that range. Oh and, we purposely sought out areas with cell towers and power lines to test just how clean the Rugged’s signal would remain, and it was flawless indeed.

Driving Performance- We found that the Rugged drove much like other DX5 series radios, the DX5 Pro for example. Both steering and throttle are much more linear than older Spektrum gear, feeling perfectly linear. We would not have a problem racing with the Rugged, as its actual driving performance is nearly on par with any radio on the market, regardless of price point. The steering was so fast that our test drivers just couldn’t notice any type of delay while driving, and its throttle control, especially below half throttle, is incredibly precise when crawling.

Durability Testing- Hey, if you ship a product that has “Rugged” in the name, it isn’t gonna get the normal beating… it is gonna get the worst-of-the-worst. In fact, we’ve never treated a radio as badly, not even close. Heck, most cars we test don’t get abused as badly as we did the DX5 Rugged. So, you’ve seen the pictures of the DX5 Rugged 10 feet above Cubby’s head. You’ve watched the video of us using the Rugged while it was completely submerged, and here is the scoop.

During the giant hucks in the air (and after a couple holes of frisbee, I mean transmitter-golf), we did have the LCD screen protector pop off several times. The protector is held on with something like a double sided sticky tape that does not pop off under normal circumstances (like a drop off your tail-gate). That protector was easily popped back on and our screen still works fine.

However, during our underwater torture test, the screen stopped working until the unit was completely dry again. So while the radio still worked perfectly during the water test, the screen went completely away for several hours. Therefore, we can highly recommend that you do NOT completely dunk your DX5 Rugged just for the fun of it (remember, we do it so you don’t have to).

So, after several weeks of ridiculous durability testing, our test unit still works like the day we received it. Yes, the radio that you saw high in the air (we did that shot twice by the way, and both times Cubby threw the radio out of the frame in height) was the exact same radio that you saw in the water torture video, and that same radio is alive and quite well today. Sure, it has scratches everywhere (and will occasionally still drip some water, LOL), but it still works like new.

How well does the thumb lever work for one handed steering? It worked fine for our test drivers. In fact, they were all pretty stoked to have a radio that is easy to drive one handed right out of the box (most people mod other models to do this). We did think that the thumb lever (but not the wheel) was a bit too far from the center-line of the radio, so the lever was a bit of a stretch to reach with smaller hands. Overall, the thumb lever is a great feature to have when doing ultra-gnarly crawling, filming with one hand while driving/bashing with the other, etc.

What about that hidden compartment? No, it doesn’t have a whole lot of space, but it has more than enough for a small 4 way and some L-wrenches.

In a day and age when most companies are going super conservative, we were stoked to see the Rugged really stand out from the crowd. It is awesome to see a manufacturer like Spektrum put out a truly innovative radio for the masses, not just the “racing crowd”.

We like the bash bar on the front of the Rugged. The bar is attached by a pair of bolts, making it easy to remove it needed, or making it easy to bolt in an upgrade replacement, and was designed to help protect your hand (and the trigger) when crawling in deep brush. Stock, the bar gets the job done, but we can’t wait to see what kind of trick parts that the aftermarket is bound to bolt in there (like camera mounts, a wider design to fend off heavy brush, a drink holder, etc).

Time To Bash: B The DX5 Rugged takes a standard amount of time to set-up. Binding to a receiver is fast and relatively easy, as are other set-up items like trim, naming a model, etc.

Car Show Rating: A+ With “Rugged” in its name, this Spektrum radio more than looks the part. The Rugged has an aggressive/off-road look that our test crew absolutely loved.

Bash-A-Bility: A+ It is really that tough of a radio? Yes, it is far and away the toughest radio we have ever tested.

Range: A The new era of Spektrum radios are no joke when it comes to range. Our test unit had more range than we had eyesight.

Value: A In an age where a good high-end radio is well past $500, the Rugged absolutely feels like a steel at $199.

Big Squid Rating: A At the very end of our review, we are left with just one question- is the Spektrum DX5 Rugged the best radio of all time? It performs like a high-end race radio, it can out-bash any radio on the planet, and it totally looks the part. Yes, the Spektrum DX5 Rugged is a fantastic radio, one that just might be the best radio of all time. Props Spektrum, you knocked it out of the park with this one!

Posted by Cubby in Accessory Reviews, Featured Posts, Transmitters on Thursday, January 24th, 2019 at 10:34 am