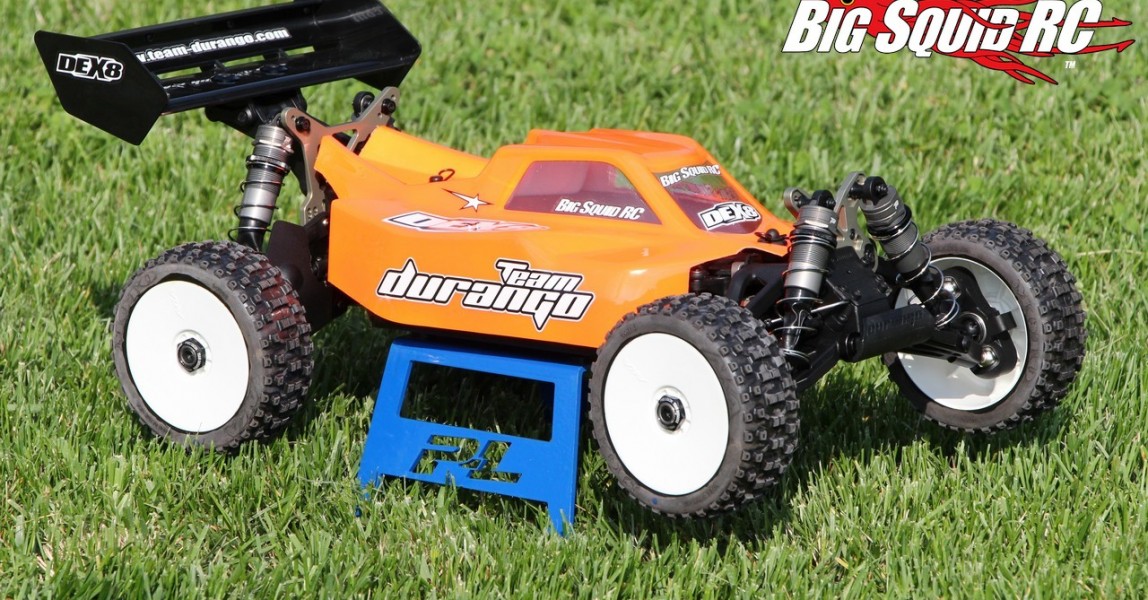 Hot and new for 2015 is a whole new line-up of 8th scalers from Team Durango. Being the super lucky media types that we are, we managed to get our hands on one of the first DEX8 Buggy Kits to hit American shores and have been giving it the full BSRC Bash Crew treatment for several weeks now. The last 8th scale buggy from Team Durango was not only a great track machine, but also turned out to be an epic basher. Is the new DEX8 better than the old buggy? Can it take a licking and keep on ticking? Does it come with the legendary handling that Team Durango cars are known for? Keep on reading to find out…

Primary Competition: There are a bunch- the Associated RC8.2e, the Losi EIGHT-E, etc.

What’s Needed To Complete: You’ll need tools to build the kit, diff fluids, shock oils, a pinion gear, paint for the body, a set of wheels, a set of tires, a brushless motor, a speedo, a servo, a radio system, a LiPo battery, and you’ll need a battery charger.

Build Quality: We found two issues with the parts that came pre-assembled on our DEX8 Kit. One of the pins going through a wheel hex was not centered, we had to loosening the set screw and center it before a wheel would go on. Also, one of the rear shocks was pre-built significantly longer than the other, this resulted in a lot more droop on one rear a-arm than the other. Otherwise, the rest of the pre-built gear was good, and the quality of the final assembly is in your hands.

Set-up Notes: To control the animal we used a Futaba 4PX. Steering duties were handled by a brushless Hitec 9360, while a RC Gear Shop 8th Scale Brushless System provided the power. A few coats of flo-orange Duratrax paint covered the body and we used a Castle Creations MOD1 pinion (17 tooth) and 6.5mm Castle battery connectors. For juice we enlisted a MaxAmps 4S 6500mAh LiPo, while a TrakPower VR-1 did the charging. AKA Moto tires put the power to the ground. Associated 35w oil was used in the front shocks and we ran 30w in the rear. Finally, we used Team Durango oil in all three diffs.

Turning: The DEX8 has great geometry for carrying a lot of corner speed. It has a ton of mechanical grip and really tears it up in the corners. It steers mostly neutral, but in certain conditions can have a bit of oversteer. The front feels really planted on just about every surface, as the did the rear. If you are looking for copious amounts of corner speed, the DEX8 has it.

Jumping: We loved the way the DEX8 jumped. It tracks very straight up gnarly jump faces and generally likes to fly flat. When corrections are required, its 3 diff platform made changes easy, but it was not overly sensitive in the air like some vehicles can be. We found that the DEX8 could be landed exceptionally crooked/sideways without rolling, it was amazing some of the crazy landings we were able to pull off. Lastly, we set the ride height on the DEX8 with the bones slightly above level, that, combined with the nicely done shocks settings and excellent geometry, allowed the buggy to soak up big landings like a sponge.

Bumps/Whoops: The DEX8 was generally an animal in the rough. Once in a while it would give a sideways kick from the rear when hitting square edged bumps at speed, but overall it loved pounding the rough at insane speeds.

On-Road: 8th scale buggies are typically know for ripping up the tarmac and the DEX8 was no exception. With loads of power on tap and a great handling chassis, we were throwing the buggy around at crazy speeds in our local parking lot. On occasion it would traction roll when turning hard at speed, but otherwise it was a blast to drive on-road.

Grass: Like most 8th scale buggies the DEX8 got along well in grass. It doesn’t have the ground clearance of a truggy or monster truck, but it could still plow through moderately tall grass with authority.

Power: While the Durango doesn’t come with a power system, we found the combo that we used, an RC Gear Shop BL system and a MaxAmps 6500 4S pack, provided tons of yank across the entire power spectrum and was a nice combo in the DEX8.

Broken Parts: We found the DEX8 to generally be quite tough. We slammed numerous object, cased lots of jumps, and smacked off of buildings with no broken parts. Later in testing it was time to get extreme and we did manage to break the buggy, but it wasn’t easy. We kept tilting a ramp higher skywards in order to gain some extra height, but at some point it turned from a ramp into a vertical wall and we tagged it full speed. The ramp was utterly destroyed and we managed to blow the stock spur and rip out a pillow ball.

Plastic spur gears sure are quiet, but steel spurs are forever. For bashing applications like ours we would really like to see Durango put out a beefy steel spur gear.

You can read the build notes at the link above, but if you are too lazy to hit the link we had a good time building the DEX8. It goes together Very, very quickly, and we didn’t run into any issues during our build.

So what about that fancy dancy center diff that slides to adjust gear mesh? It worked ok for us. You have to loosen a few screws under the chassis then it slides easily enough to allow for mesh adjustments. However, it doesn’t beat the best set-up in rc, which of course would be the motor mount in the Losi SCTE and 8IGHT buggy. The Losi takes just one screw to adjust mesh and to remove the entire motor.

What about that Gurney Flap on the rear wing? We didn’t try driving without it, but the rear sure did seem planted on our test unit.

Need a quick spare part but your LHS does have one? Several of the parts on the Durango are also found on the ARRMA Typhon. The two buggies are much different but some of the parts (like a-arms, wing mount, splash guards) are of the same design.

We were big fans of the shocks. They worked smoothly, had very little stiction, and took some big hits without issue.

Best Mod: We don’t know of one that is available, but we would sure like to be able to buy a steel spur for the Durango.

Time To Bash: A Compared to other “kits”, the Durango took very little time to build.

Workability: B The DEX8 uses a standard 8th scale layout that makes it easy to get to just about anything.

Car Show Rating: B The wheels and tires are up to you, while the body is a modern style that isn’t too “cab forward” looking.

Bash-A-Bility: B We found the DEX8 to be a tough customer. It took a bunch of gnarly hits without any breakage.

Fun Factor: A The DEX8 can make you feel like Superman at times, nearly invincible. You end up racing everyone you are around and going for jumps that you never thought could be made. Seriously great times.

Handling: A Is there a better handling 8th scale buggy than the DEX8? Not that we’ve driven. The Durango is an animal in the corners and loves to fly.

Value: B While the $549 price tag isn’t cheap, we thought the buggy brought a lot to the table for that price.

Parts Availability: C You can walk into pretty much any hobby shop in America and buy Traxxas parts, but that isn’t the case with the Durango. Yes, Durango has come a long ways in getting more parts out there, but right now we have to rate their parts availability at a C.

BigSquid Rating: B+ When bashing we primarily need two things out of an 8th scale buggy- it has to handle well and it has to take a beating. The Team Durango DEX8 did both exceptionally well. It is arguably the best handling 8th scale buggy we’ve ever tested and we beat the heck out of it with minimal breakage. The Durango DEX8 is a great bash machine and we can very highly recommend it to you.