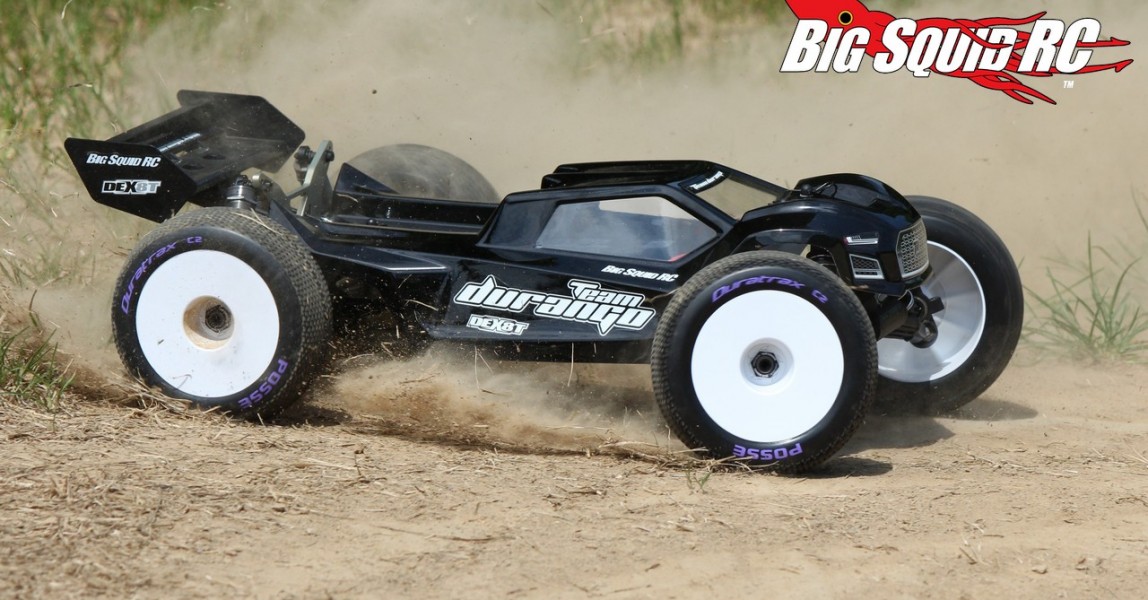 Let’s face it, monster trucks and 8th scale truggies rule most bash areas. Their sheer size and power allow them to run amok over lesser bash-mobiles. One of the latest truggies to hit the market comes from Team Durango with their DEX8T Kit. Is it only suited for a race track? Does it out handle its competition? Can it go big without breaking? Read on to find out…

What’s Needed To Complete: The DEX8T comes as a kit so you’ll need some gear to finish it up. You’ll need a radio, a steering servo, a brushless motor, an ESC, wheels, tires, a pair of 2S or a 4S LiPo battery, a pinion, Lexan paint, shock oil, and diff oil.

Build Quality: Guess what? It’s a kit so its build quality is 100% in your hands. Ok, maybe not 100% in the case of the DEX8T as most of the sub-assemblies are pre-built, but it is up to you to inspect all the parts before you put them together.

Test Drivers: The list is long on this one-> Hawaiian Chris, Iron Mikeee, The RC Kid, Sam Not A Noob, Robbie Da’ Gangster, Terry H., T-$$$ and yours truly.

Set-up Notes: For a power system we installed the 120A speedo from RC Gear Shop along with one of their 8th scale sensorless motors. Juice was provided by a 4S TrakPower 6700mAh LiPo battery, while a Futaba S9352 servo did the steering. A 16 tooth pinion gear was installed and we ran Duratrax Posse truggy tires. A nice coat of metallic black Duratrax paint covered the inside of the body, while a Futaba 4PX ran the entire show. Shocks and diffs were built to the kit specs.

Turning: Several of our test drivers, in fact most of them, drive electric truggy on a regular basis. Therefore we were dialed in the ability to compare the Durango to several of the other trucks on the market. To boil it down, pretty much every driver came back with a big “WOW” on their face after driving the DEX8T. The big truggy didn’t “bite” at corner entry, instead it leaned in nicely with the rear staying well planted behind it. Planted is the key word here, it showed insane amounts of traction that resulted not only in it being easy to drive in the corners, but it also produced epic levels of corner speed. Yes, you could get the rear to bust loose with a tap of the brake at corner entry, but that usually wasn’t the fastest, or easiest, way around a corner with the DEX8T.

Jumping: Big truggy tires have a lot of rotating mass, which in some applications result in a truck that is too sensitive to trigger input while the air, but the Durango truggy was pretty dialed. It’s center diff definitely helped make it easy to jump and its suspension soaked up landings like a champ. The DEX8T was damped/sprung for typical track conditions, so it did bottom when doing roof jumps, but on more normal “track sized” jumps the suspension did a great job. Arguably the best part of the DEX8Ts handling was how sideways you could land from a jump without flipping over. We were continually amazed by just how far sideways the truggy could be landed without it catching and crashing. While bashing this made it easier to land without issue, while on the track it made it stupid easy to jump a bit longer, land completely sideways, then leave the guy you just passed in the dust. Good times.

Bumps/Whoops: The DEX8T was also a champ in the rough. Its big truggy tires help it ignore smaller bumps, while its large footprint and well damped suspenders allow it to ignore normal sized bumps and ruts. Even over fairly large dirt clods the DEX8T plowed through them like a beast. More good times.

On-Road: Yes we know, the Durango was never, EVER, designed for on-road use, but most bashers use their cars/trucks/buggies on every type of surface. The DEX8T is a gnarly beast on-road. It’s fast, it ignores all bumps, and its turning inspires confidence to the driver. Yes, it would occasionally traction roll, and it wasn’t as nimble as smaller machines, but trust us, it does a great job of dominating the local parking lot.

Grass: Big in size, huge in power, our review DEX8T was extremely hard to stop in grass. If grass driving is your thing, you will love the Durango.

Tires: No tires are included with the Durango, so the tire choice is completely up to you. We’ve had great luck with Duratrax Posses in the past, so that’s what we went with on the DEX8T. Most of our driving was on the track where the Posses were really dialed, but they also performed well on pavement and grass.

Power: No, a power system is not included with the Durango. We’ve been running the RC Gear Shop brushless systems in a number of different vehicles since they were introduced so that’s what we put in the Durango. Once again we were very impressed. It was super smooth from a dead stop, it had a nearly 50 mph top end on a 16 tooth pinion, and it didn’t get too hot, even in 95 degree ambient temperatures.

Radio: Nope, the Durango doesn’t come with a radio either so we popped in a Futaba 4PX and a Futaba S9352 servo. As you probably already know the 4PX is the best of the best. We had never driven the 9352 before, but were once again left incredibly impressed after using it in our DEX8T. It was crazy fast, buttery smooth, and had way more holding power than we needed, even on the big truggy tires of the Durango.

Broken Parts: We found that our test unit held up better than expected for the amount of abuse that we put it through. Early in testing we stripped out the stock plastic servo arm, but after that the truck took a lot of beating without an issue. Eventually we did annihilate the spur gear, but to date we’ve yet to break an arm, hub, or other big part.

The DEX8T is a big, mean, bashing machines. It can easily run with 8th scale monster trucks like the Revo/Savage/MT-4 G3 at the local bash spot, but absolutely kills them on pavement and at the local track. However, for pure bashing the DEX8T does have one downfall, its center diff. Its center diff helps it out handle the competition over jumps and through rough ground, but it keeps it from pulling wheelies on demand and standing backflips.

While the center diff slides to adjust gear mesh, we are still bigger fans of the one screw Losi style motor mount for easy adjustment.

Yes, we know how quiet plastic spur gears are, but for bashing purposes we would much rather have seen good old fashioned steel.

The Gurney Flap on the rear wing is also new. We can’t say we noticed a ton of change with it on compared to when we removed it. Maybe it’s just a racer thing.

As Yoda would say, “Big fans of the shocks we are.”. The shocks on the DEX8T were durable and their kit set-up felt really good on the track. FYI, the springs on the shocks are soft for maxiumum grip on a track, so even with the pre-load adjusters all the way down the truggy could barely make a proper “bones level” ride height. For heavy bashing plan on picking up heavier springs.

What was it really like to drive the DEX8T? We think that can be summed up like this-> 1. easy to drive fast and 2. extremely well planted. Also, it wasn’t super sensitive to track conditions. When going from a dusty and blown out RC Outlaw track to the ultra high grip black groove at St Louis Dirtburners after the Futaba race, the DEX8T drove well on both without having to make a bunch of set-up changes. There are other truggies on the market that can drive exceptionally well on different tracks, but most of them require big changes to do so.

Time To Bash: A Kits just don’t get any faster to build than the Durango. It went together well and incredibly fast.

Workability: B With a standard 8th scale layout and large truggy platform, it was very easy to spin wrenches on the Durango.

Car Show Rating: B Our test drivers had a love/hate relationship with the looks of the DEX8T. Some couldn’t stand it’s UFO race look, while others liked its aggressive shell.

Bash-A-Bility: B We put the DEX8T through loads of rough driving, dozens of ridiculous hucks, and it suffered very few broken parts.

Fun Factor: A Ok, so our test drivers were fighting over the transmitter with the DEX8T. Its huge size, big power, and incredible handling made our drivers feel a whole lot like Superman, hence the reason they were fighting over who got to drive next.

Handling: A No, we were not able to go back-to-back with all its competition, but we can say that it does very little wrong in the handling department. Its turning is top notch, as is its jumping and rough track handling. If there is an electric truggy that handles better than the Durango, we haven’t driven it.

Value: A We consider the DEX8T to be the best truck in its class. And while $599 isn’t cheap (nor is the cost of the equipment it takes to get it running), it yields incredible performance that simply can’t be had at any price point with most other bash-mobiles.

Parts Availability: C You won’t find DEX8T parts on many pegs at your local hobby shop, but parts are readily available from numerous outlets on-line.

BigSquid Rating: B+ The Durango DEX8T is an outstanding vehicle and one of the rare ones that can dominate both the local track and bash spot. If you are looking for the absolute upper edge in 8th scale performance, the DEX8T is your machine.