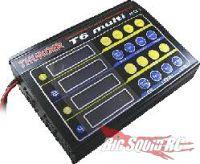 Are you one of those guys that always has more chargers on your pit table than everybody else? (*cough*)  Wouldn’t life be simpler if you could just pack along one charger that would charge multiple batteries?  I think so.  Lucky for us sane people Kershaw Designs is now selling a charger that does just that.  The Thunder T6 Multi four output balance charger can, as it’s name implies, charge up to four different batteries at the same time.  It’ll charge and balance 1 – 6S LiPos without breaking a sweat and up to 15 cell NiMHs.  This monster of a charger does require a 20 amp power source at a minimum, it probably wouldn’t hurt to have more.

The Thunder T6 is available now for a very reasonable price of $149.99. Check out the Kershaw Designs web site for more info.