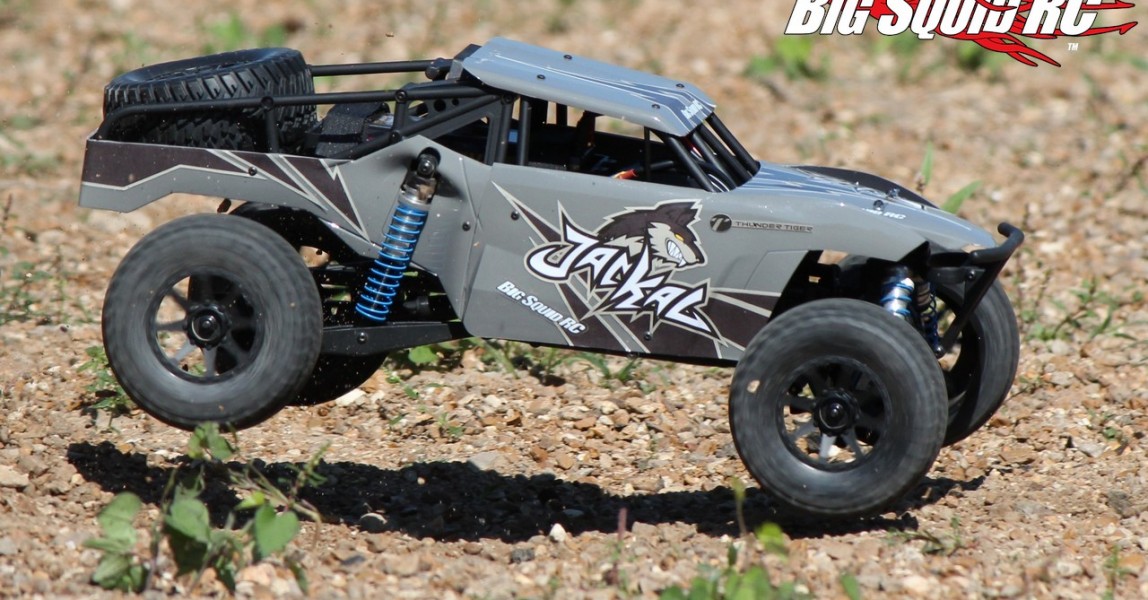 What is a Thunder Tiget Jackal? It is a RTR tenth scale desert buggy with independent suspension up front and a solid axle with locked diff in the rear. Sound familiar? It should, that is the formula that the Axial Yeti and Vaterra Twin Hammers have used to sell a ton of vehicles. How does the Jackal stack up to the competition? Is it fun to bash? Does it break when you tap a curb? Read on to find out the full scoop…

What’s Needed To Complete: Not much, you’ll need a battery for the buggy, a charger for the battery, and four AAs for the transmitter.

Set-up Notes: We prefer to test vehicles bone stock, so that is the way we tested the Jackal. For juice we used a 100C Prime 2S 6500mAh LiPo battery with a Hitec X1 Pro handling the charging duties.

Turning: In a bashing environment the Jackal turned fine. In sand, loam, and grass, the front wheels stuck where you pointed them and the rear end stayed right in line. We did test the Jackal on a legit rc track, but on that dusty/hardpacked surface the solid axle rear end with locked diff made the rear want to slide around.

Jumping: For the type of vehicle the Jackal is, it jumped fairly well. It tended to jump relatively flat and its suspension did a decent job of soaking up the landings.

Bumps/Whoops: The damping from the shocks is just a bit on the light side, this works well for crawling and slow speed work, but can leave the buggy bouncing during high speed rough sections. The Jackal generally handles well over ruts and dirt clods, but would be even better with heavier shock oil.

Crawling: The Jackal uses tires that are pretty much the same size as a standard SCT. This is also about the same diameter of a 1.9 crawling tire. So, the tires aren’t enormous for crawling, and they aren’t a particularly soft compound either. While we felt the Jackal platform did well enough over rocky sections, it was certainly held back by its tires. Out of the box it could get over simple sections with slight inclines easy enough, but we would love to see how it could attack a crawling course with stickier tires intended for crawling use. Also of note, the battery is mounted quite high which also hurts the Jackal when crawling. To boil it down, a few simple changes could probably make the Jackal into quite the beast for rock crawling.

On-Road: We found the Jackal to be a bit “tippy” when driven on pavement. That wasn’t a problem at lower speeds, but when making speed runs the buggy would traction roll when turned hard.

Grass: The tires, locked rear diff, and 4wd system did a great job of getting the Jackal around in short grass. No, it can’t plow through grass that larger scaled vehicles can, but for its size it got around well.

Tires: The stock tires are quite hard which is less than optimal for grip on hard surfaces, but we liked their scale appearance and they worked well in loamy conditions.

Power: The Jackal isn’t geared very tall (26 mph top speed), but it certainly has good power. We didn’t experience any cogging and the stock brushless power system had great low end and mid-range power. When crawling it was geared a bit on the tall side, making it hard to gingerly get over a steep rocky incline, but it certainly didn’t lack for power when needed. For general bashing it could use a bit more top-end, but had enough speed to double into the big triple on our local 8th scale track.

Radio: The included radio was a pretty standard RTR unit that had decent ergonomics and range. We didn’t have any issues with glitching and the wheel had a comfy foam grip.

Broken Parts: We put the Jackal through a fairly normal test routine with very few broken parts. You’ll need to keep an eye on the grub screws that are on the front outdrives, as one of ours came loose early in testing, otherwise it did well under normal abuse. We eventually managed to pop the plastic rear center driveshaft when landing a roof jump, but all-in-all the Jackal proved to be a solid machine.

Take a look at the picture below that shows the bottom side of the Jackal. Notice the solid front arms? Yes, they are tough as nails.

We really liked the way the body pivots back to change out the battery or to do normal wrenching.’

The steering servo is out in the open and easy to get to, plus it works quite well. The servo had enough speed and torque to get the job done right out of the box.

The front bumper isn’t that big but did a good job of soaking up hits.

We hit numerous water holes with the Jackal and the electronics held up fine.

Best Mod: Softer tires for more grip is where we would spend money first. The first cheap mod that we would do is to put slightly heavier shock oil in front and rear.

Time To Bash: B The Jackal is pretty standard fare to get up and running for a RTR. Charge up a pack and hit the trail.

Workability: B While the rear cage can get in the way at times, the Jackal was laid out well and relatively easy to wrench on.

Car Show Rating: B We liked how the wheels/tires looked and the detail of the roll cage and spare tire.

Bash-A-Bility: B The Jackal proved to generally be a tough machine.

Fun Factor: B We had a lot of fun driving the Jackal but would have liked a bit more top speed out of the box.

Handling: B The Jackal jumps flat, it corners well, and is generally easy to drive.

Value: B The Jackal comes in at one of the cheapest price points in its class and gives a lot of fun for the money.

Parts Availability: N/A We are testing the Jackal before it, or any of its parts, are even shipping in our country so we don’t know how the parts availability will turn out.

BigSquid Rating: B The Jackal is in a tough class. On one side is the epic Axial Yeti, on the other is the incredible Vaterra Twin Hammers. How does the Jackal fit in? That is impossible to tell without doing a full blown shootout, but we do know that we had a blast with our test unit and can highly recommend it to you.