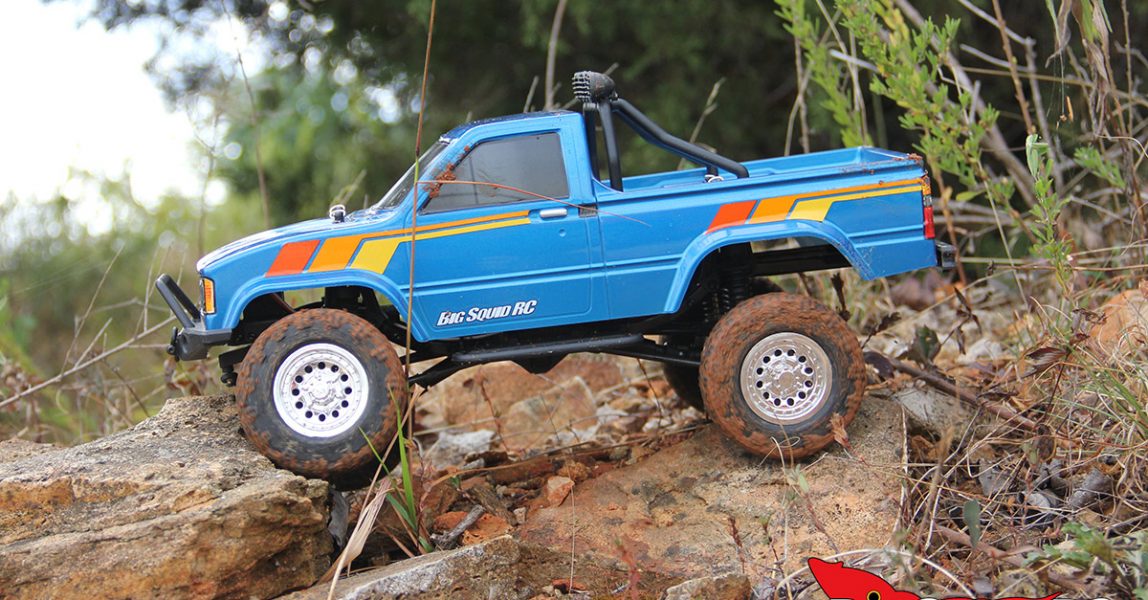 Front wheel travel (vertical only, axles level): 1.5″
Rear wheel travel (vertical only, axles level): 1.5″
Wheelie on demand: No
Backflip off ramps: No
Stability Control: No
Sound Module: No
Self-Righting: No
FPV: No
Top Speed (measured by BSRC): 4 mph
Runtime (measured by BSRC): About 20 mins on the included battery pack with lots of hard on-throttle driving.

What’s Needed To Complete: You will need to supply four AA batteries for the transmitter. The rest is in the box.

Build Quality: The truck had no manufacturing problems and had all screws and fasteners appropriately tight.

Test Drivers: Travis and Ross, the dynamic duo of local r/c fabricators. Lily the Explorer and myself.

Set-up Notes: Outside of charging the included battery and putting some AA’s in the transmitter, it was ready go upon opening the box.

Turning: It has a great turning radius and the small size no doubt helps this. Just be aware that turning at full throttle does cause a lot of body roll because of the friction shocks. The truck is so light that even with the tires not having foams, there is no tire sidewall rolling, even on pavement.

Jumping: The truck is not fast enough to really jump anything, save for popping the lip of a curb or solid object. If you want to talk about falling though, it’s super light so it doesn’t really take much damage during even the nastiest of dismounts.

Bumps/Whoops: A traditional scaler isn’t something you should plan on pounding the whoops with, especially a 1/12 rig, at that. That said, as long as the bumps are small enough it does fine crawling over them. It’s a bit bouncy though.

On-Road: This truck isn’t fast enough to get your blood pumping on asphalt, nor is designed to handle well on it. It’s an off-road crawler, so that’s fine.

Grass: If you’re driving in short stuff, the Hilux works great. The 1/12 size doesn’t like tall grass, though. There just isn’t enough ground clearance for thick, deep shrubbery. We also tested in heavy leaf cover (it is fall, after all) and the same can be said for that.

Crawling: The most important category of this review. This vehicle’s biggest advantage is the weight distribution, which is fantastic. It only weighs a scant 2 lbs, and most of that is up front with a good COG.

It also has a nice chassis mounted steering setup that the modern 1/10 scale crawler trucks come with nowadays and full aluminum links. Yep, there is no link bending on this Hilux, even when tagging particularly gnarly rock.

This is a vehicle that’s very pleasant to trail with. It’s also light enough to where just picking it up and taking it to the next crawling spot can be done with ease.

The issue here is the shocks and tires really let the nice chassis down. The tires don’t grip very well, with the biggest culprit here being the lack of foams. It’s also fairly bouncy on the rocks.

I’d almost guarantee that if both of those were given the aftermarket treatment then this 1/12 scaler would be a heck of a performer. As is though, it leaves much to be desired in a strict rock crawling environment.

Tires: The tires look really nice but the compound isn’t the best, and they lack foams. Because of that there just isn’t much good to say about them save for the cosmetics. They work fine when doing basic trail driving, but, as mentioned above, they aren’t the best for hardcore crawling.

Power: 380 sized brushed motors are not exactly over-powering but the motor/battery combo on this truck works surprising well for what it is. Being a featherweight really helps in this regard. When checking it out on a better LiPo battery, that REALLY helped pick up the 380.

Radio: A standard RTR style 2.4 radio, but the ergonomics are nice. The wheel is rubber, which is a nice touch.

Broken Parts: We experienced no broken parts on the Hilux, despite giving it a good flogging including intential high altitude dismounting. The truck is a featherweight so there is relatively low stress on the drivetrain, especially in wrecks. It really helps from a durability standpoint.

The included battery is a small “shorty” pack, but the battery tray has enough space to accommodate a longer stick with no problem. That’s a nice quality of life feature.

The truck’s small size and light weight make it extremely portable. If you are wanting something to mess around with on your lunchbreak, it’s a good fit.

The Toyota Hilux body looks really good with the wheel/tire combination. Ours was blue, but you can also get it in black and red. Also, the truck comes without many of the decals applied and has several striping variations, so you can customize the final look how you want.

The chassis and axle design are impressive for a 1/12 rig. The layout of the chassis in particular is great as it’s very similar to top performing 1/10 trail trucks.

Having both a chassis mounted servo and aluminum links right out of the box is a great thing!

The ESC and battery both have Deans-style plugs. A big plus!

The Hilux is listed at waterproof and we can back up the validity of that claim. We spent one of our review mornings down in a creek bed and the truck was just fine in the drink. No glitching, shutdown or anything.

Keep in mind that 1/12 scale vehicles are a lot more limited in what they can run in versus their bigger counterparts. You can safely run them outdoors, unlike say, a mini-crawler, but they can’t tackle terrain that the bigger vehicles routinely run. The truck would get hung up from time to time thanks to trying to push through terrain more suited for 1/10.

Best Mod: With new tires and shocks, we feel the Hilux would be a great performing mini-truck!

Time To Bash: B Just add AA’s to the transmitter and hook the included battery up to the charger and you’ll be wheeling soon. If you want to supply your own battery, the truck comes equipped with Deans style plugs, so that’s a plus as well.

Workability: B The straight rail chassis is easy to work on as many of the individual components can be accessed without a bunch disassembly. The hex hardware is of good quality and we never stripped anything out.

Car Show Rating: B The lexan Hilux body is really sharp and the plastic rollbar is a nice touch. It’s one of the best looking trucks in the 1/12 class.

Bash-A-Bility: B No broken parts on the Hilux is a big plus. The vehicle is so light that it shakes off most spills with nary a scratch. It does have a very slow top speed though, so that takes away from the excitement.

Fun Factor: C The truck is plenty peppy with the included battery for the intended use, but the friction shocks and foamless tires really hold it back when scaling.

Handling: C A scaler isn’t required to handle like a 2wd mod truck, but, as has been echoed throughout this review, those shocks REALLY hurt the handling as it wobbles quite a bit. The saving grace here is that the weight distribution (and overall low weight, in general) is very nice so the truck does still have its moments.

Value: C The $219 price isn’t bad given that it comes with everything you need in the the box, as well as certain upgrades like aluminum links. However, new tires and shocks are mandatory to unlock the truck’s potential.

Parts Availability: N/A The truck has just released so this is yet to be seen.

BigSquid Rating: C+ The Thunder Tiger Hilux is a very well laid out modern scaler that looks awesome. It’s also held back by several things that limit overall performance. That said, if you are looking for a 1/12 scale crawler that’s easily transportable with no frills operation, the Hilux is a good choice.