A while back, I decided to make the jump to a Digital Spread Spectrum radio. As a basher, this is almost a must! When you have 20 + friends all out in a field or backyard or parking lot somewhere, nobody is really looking to grab a frequency clip, and we all know how that’s going to turn out right? So anyway, after I made the purchase, I found out quickly that the receivers were not the cheapest things in the world, (about $70 each) and this proved interesting for someone who has 10+ cars any season. While I own a lot of cars, there are certain ones that get less use then others, but by no means should this mean that I those less used cars don’t get the awesomeness of my cool super radio! Like most people, I used the 2 sided tape to hold the receivers down, this proved to be a real pain to remove, especially if you were using the good stuff. I thought to myself, there has to be a better way! First idea.. velcro! I tried it.. it almost worked, but as it turns out, most velcro really isn’t that strong when you are only using a little less then a two inch piece. I tried several brands, all claiming to be the best stuff. Well, it all sucked.

As luck would have it, one day while driving down the road I got a rock thru my windshield! When the windshield was going to get replaced, I had to remove my i-pass (it’s a thing you attach to your windshield to automatically pay toll-booths). It was held there by some velcro like stuff, and it was almost impossible to pull off. Seriously, I had to pull and pull to get it to budge! This was the stuff I needed in my rc vehicles holding my receivers in place! I looked at all the major hardware stores, nobody carries the stuff! I found out that if you ask nicely, the Toll-booth person will give you a little piece, but I wasn’t about to go asking again and again. 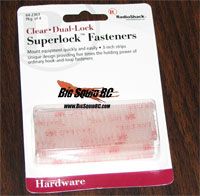 A few weeks later, I found it! Radio Shack was carrying it. It comes in a pack of 4, 3-inch strips. The only bad part, is it’s expensive! We’re talking $5 for 4 tiny strips! The good news is, the stuff works like a charm! You have to wedge a small screwdriver in the side to pry it off, or at least get it started. While it’s not cheap, it’s way cheaper to put the stuff in all your vehicles then buying one more receiver.

After going out and buying a bunch, I now have strips in most of my vehicles, and also the same strips on the back of most of my receivers. This way, if I’m out at a bash with several vehicles, and only 1 radio, it only takes me a few minutes to put my best receivers in my other cars and I’m ready to go! I’m still looking for a way to buy the stuff in bulk, or at least at a cheaper price. To my surprise, I haven’t seen anyplace else sell the stuff.

–
–
Have a tip this good, or even better? Not just for receivers, but anything RC related? Drop me an email. If it’s good enough for the page I’ll mail you some FREE stickers!! Pictures help!