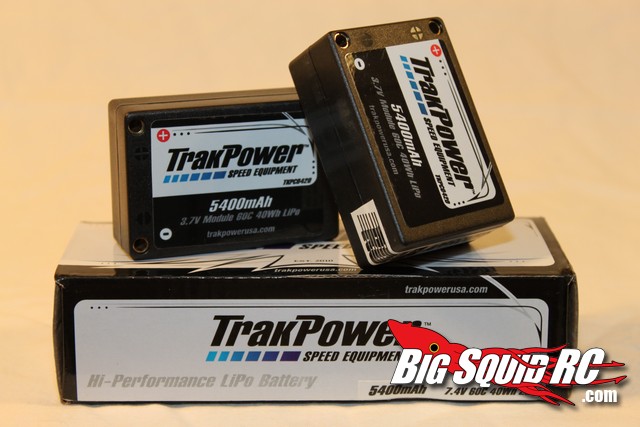 Back in the day saddle pack batteries got a lot of use, then for years they seemed to fade away. Once again chassis designers are going back to using saddle packs to help optimize weight distribution. Today we’ll be reviewing TrakPower’s entry into the saddle pack Lipo wars, their 60C 5400’s. Are they worth your cash? Let’s see…

What’s In The Box: Everything you need to get up and running- a pre-soldered jumper wire and a pair of 4mm bullets.

Driving Impressions: We used the TrakPower saddle pack in our Durango DESC410R that was equipped with a Castle Max Pro and a 1410 brushless motor. Maybe we were geared to the moon but our Durango freak’n ripped hard on track. Low end was manageable, but the mid range and top end were quite a bit more robust than we expected. No, we were not able to go back to back with another saddle pack for comparison, but I know fast when I feel it, and our TrakPower equipped Durango was digging trenches off the line and was capable of over-jumping everything.

Downsides: I’d like to have seen a faster charge rate, 1C just doesn’t cut it now days. Also, the included jumper wire was much longer than required. Not a big beef, but excess wire means additional resistance and it was so long as to have created an issue with getting into spinning drive-line parts.

About The Graphs: We used a West Mountain CBA discharger to performed a 1C/5.4 amp discharge to test capacity. Next we did a 30 amp discharge, then a 6C/32.4 amp discharge, and finally a 60 amp continuous discharge to see how well the TrakPower held its voltage under a continuous load. The higher a battery can hold its voltage, the faster your car/truck will be. Ambient temp for all bench tests was 72 F, the pack was always charged on a Hyperion 720iNet3 at 1C/5.4 amps and voltage cut-off was always set at 3.0 volts per cell during discharges. We tested it with a Traxxas connector just like we have done for every other pack.

Time To Bash – 8.0/10 -Not as fast as a completely pre-soldered pack, but soldering on a pair of bullets doesn’t take any more time than soldering up a normal connector.

Bash-A-Bility – 10/10 -Yes, we were hucking the Durango off of roofs and casing big jumps with the TrakPower inside and thus far the battery has shown no ill effects.

Fun Factor – 8.5/10 – Having more than enough yank on tap to pass 8th scale buggies is a smile producer.

Power – 9/10 – The TrakPower saddle pack absolutely ripped on track. A bit softer than the most elite packs, but still plenty fast.

Value- 8.0/10 – The TrakPower isn’t cheap but because it puts out a formidable amount of power it’s a good value.

Big Squid Rating – 8.6/10 – Tentacles.. We were impressed by the TrakPower saddle pack Lipo. Mashing the throttle on our TrakPower and Castle equipped Durango was quite the experience- the truck would hunker down and simply rocket away from a dead stop. If you are looking for a high quality saddle pack the TrakPower is a solid choice.