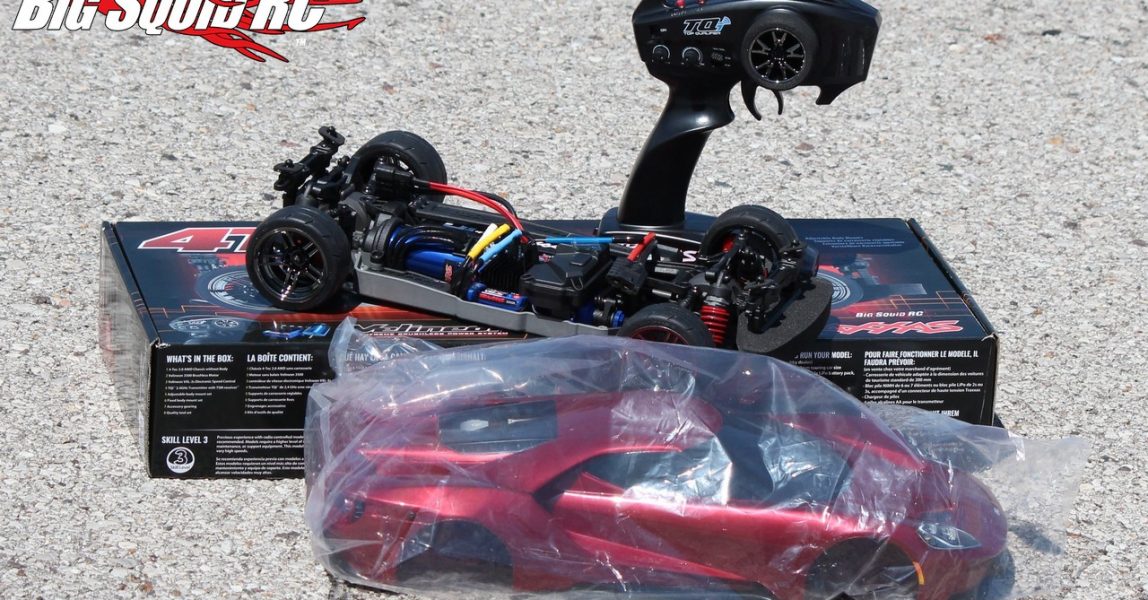 The folks over at Traxxas recently put out a surprise for all you on-road fans, the 4-Tec 2.0 Body-Less ready to run. This version of the 4-Tec comes ready to run, but does not include a body, thus saving you cash. You see, the very first thing that many on-road drivers do is install a new body. Why pay for a RTR body if you are never going to use it?

A few weeks ago we received a 4-Tec 2.0 VXL for review. We popped on a new Traxxas Ford GT body and proceeded to put the car through the wringer. How does it drive? Can it take hardcore abuse? Is a car that doesn’t come with a body a good idea? Read on to find out…

Primary Competition: There are a bunch of 1/10th scale RTRs on the market, but the Traxxas doesn’t come with a body to make it fully RTR. Still, you’ll be comparing the Traxxas to other brushless RTR 1/10th scale touring cars.

What’s Needed To Complete: While the Traxxas is pre-built and pretty much ready to rumble out of the box, you will need to supply a battery for the car, four AA cells for the transmitter, and the body of your choosing.

Build Quality: We found the shocks to be well built, we didn’t find any loose screws, and the pinion/spur mesh was spot-on. The only problem spot we found was the servo saver which was adjusted a bit on the tight side.

Test Drivers: Our test drivers included the ever affable Iron Mikeee, T-$$$, Sam The Noob, and yours truly.

Test Venues: For testing we used 3 local parks, a 1/8th off-road track, plus the parking lot at our nearest Costco.

Set-up Notes: All bone stock baby. We didn’t change any suspension settings while we did our testing. For a body we grabbed a brand new Traxxas Ford GT in red which looked absolutely brilliant on the 4-Tec 2.0. Interstate Batteries supplied the AAs for the transmitter and we ended up using a Traxxas 2S 5800 LiPo with iD connector to power the car. Charging duties were handled extremely well by a Traxxas EZ Peak Live.

Turning: We have no issues with the way the Traxxas turned. It wasn’t as supple, or as on rails, as a dedicated high-end touring car, but it was what we would consider very dialed for a RTR touring car. The suspension settings were right in the ballpark for general pavement driving, thus allowing the car to be predictable (and easy) to drive fast. Grip at all four wheels was good on normal street pavement, with the front end sticking much better than expected. Whether you are a noobie or national champion, you’ll find the 4-Tec 2.0 a joy in the corners. Oh ya, before we forget, it also does a good job of drifting right out of the box (thank you TSM!). The VXL power easily breaks all four tires loose, thus allowing for all sorts of drifting action when you feel the urge.

Jumping: Yes we did, no you don’t want to. Hey, it’s a touring car! If big air is your thing, Traxxas makes a few things for that, just say’n.

Bumps/Whoops: Who goes out and pounds whoops on an 8th scale off-road track with a touring car? Well, we do! So no, it doesn’t handle supercross whoops very well, but it sure does a good job on road joints and other irregularities that you will find on typical neighborhood pavement. And while the Traxxas doesn’t have a lot of suspension travel, it is high quality movement, thus easily soaking up what you are most likely to find in an empty parking lot.

On-Road: Here it is, the forte of the 4-Tec 2.0, on-road driving. The general geometry and suspension settings of the Traxxas make it arguably the best handling, basher oriented, touring car of all time. For a touring car, there simply isn’t much to complain about. It corners well, it soaks up bumps like a champ, and takes very little time to get used to. The chassis is a joy to drift around a huge parking lot, just like it is making high speed passes up and down a cul-de-sac. On the downside of things, the big power of the VXL power-plant can be a bit much for first time drivers, but otherwise, we are huge fans of the way the car drove.

Grass: Nope, nope, and more nope. The car can actually be driven on super short grass, but anything taller and it instantly gets stuck.

Tires: How are the stock tires? They are fairly soft, but not like full-on competition tires. We felt like they were an excellent mixture of wear versus traction. Our tires did experience some wear, but we were constantly driving the car WFO on hot asphalt, the kind of thing that eats tires for breakfast. We did notice that as the tires warmed up they provided even better grip.

Power: The included brushless power system was no joke. We found the system had moderate temps with stock gearing, but still put out some serious power. The low end ripped hard, it straight-up blitzed through the mid-range, and just kept on pulling hard until it ran out of gearing. We didn’t notice any cogging from a dead stop, what we did see was a lot of huge smiles on our test crew’s faces.

Radio: The included TQi is a base unit but we had no issues with it. Its ergonomics worked for variety of hand sizes and we found it had great range with no glitching.

Broken Parts: Perhaps the best part of the 4-Tec 2.0 is just how freak’n durable the thing is. Now, we did end up taking out a front arm and hub carrier, but that was thanks to tagging a curb head-on at over 30 miles per hour. Yes, just like any car, you can break it, but it simply doesn’t break on small, or even “normal” sized hits.

Just like a previous version of the 4-Tec 2.0 that we tested, the VXL model tracked exceptionally straight. Once you set the steering trim it tended to stay spot on and continued to track straight as an arrow.

Traxxas wasn’t messing around when they boxed up the new 4-Tec 2.0. Why do we say that? They include a pair of optional pinions, the biggest one being a whopping 35 teeth. Oh, they also include a smaller 55 tooth spur. If speed is what you are after, it is nice that Traxxas supplies the mondo gearing right in the box.

So, this version of the 4-Tec 2.0 is quite interesting. When was the last time you can remember a company shipping a fully pre-built car with electronics, but without a body? If you are an experienced hobbyist, excluding the body saves you cash as you probably already have a dozen sitting around your garage. If you are a first day noobie, it allows you to save some cash and put it towards the exact style of body that you want.

The box the car comes in is really small. It was weird to see a “RTR” come in such a small box, but indeed, the car is fully assembled and ready to burn tires right out of the box.

The Traxxas is a shaft driven 4wd, which is preferred for bashing. Small rocks can make a big mess out of a belt/pulley system, we found the shaft drive on the Traxxas to be perfect for bashing.

We were big fans of the stock battery tray and battery strap. The tray is a good size and the strap is super easy to use and doesn’t require a body pin.

Do you need to replace the stock servo for the car to drive well? Nope. No, the servo isn’t a super fast high-end unit, but it works well in this application. We never had a test driver complain about speed or torque.

While other versions of the 4-Tec 2.0 come with solid tie-rods, the VXL version does not, it comes with adjustable units.

Best Mod: Out of the box the Traxxas is a rock solid vehicle. Other than putting on various bling-bling parts, the first mod we would install would be a Hitec servo. While not absolutely needed on the Traxxas, a faster Hitec makes a good handling car drive even better.

Time To Bash: C While the chassis is completely pre-built and comes loaded with electronics, mounting up a body does take a bit of extra time. We changed out the body mounts to install the Ford GT body. This only took a few minutes, but still, it takes more time to get up and running than a fully RTR car.

Workability: B While we rarely had to wrench on the car, when we did it was quite easy. The car uses an open layout with good quality metric hardware, thus making it an easy vehicle to spin wrenches on.

Car Show Rating: N/A The way the car ends up looking is completely up to you as it does not come with a body.

Bash-A-Bility: A It is a tank, what else can we say? Actually, we did manage to break it (thanks Mikeee!!!) but it certainly isn’t easy to do.

Fun Factor: A With big power and spot-on handling for bashing in a parking lot, we had an obscene amount of fun wheeling the 4-Tec 2.0 around.

Handling: B The Traxxas isn’t set-up to win the A main at your local track, however it is set-up dern near perfect for the rough pavement of an empty parking lot.

Value: A We gave the Traxxas an “A” in this category because we liked the fact that we didn’t have to pay up front for a body that we might never use. Well, that and the fact that you are getting one heck of a brushless powered touring car for well under 400 clams.

Parts Availability: A One of the best things about owning a Traxxas is parts support and we found this car to be no different. We were easily able to find a dozen common parts for the 4-Tec 2.0 in-stock at various outlets.

BigSquid Rating: B+ Our Bash Crew were big fans of the body-less version of the Traxxas 4-Tec 2.0 VXL. The car gave us the option to put on whatever body we wanted to, plus it proved to be a tank for reliability. Better still, it drove as well, or better, than any RTR touring car that we’ve ever tested. If you haven’t driven on-road for a while and are looking for a solid way to get back into it, or if you are a first day noobie, the 4-Tec 2.0 is a great overall car.