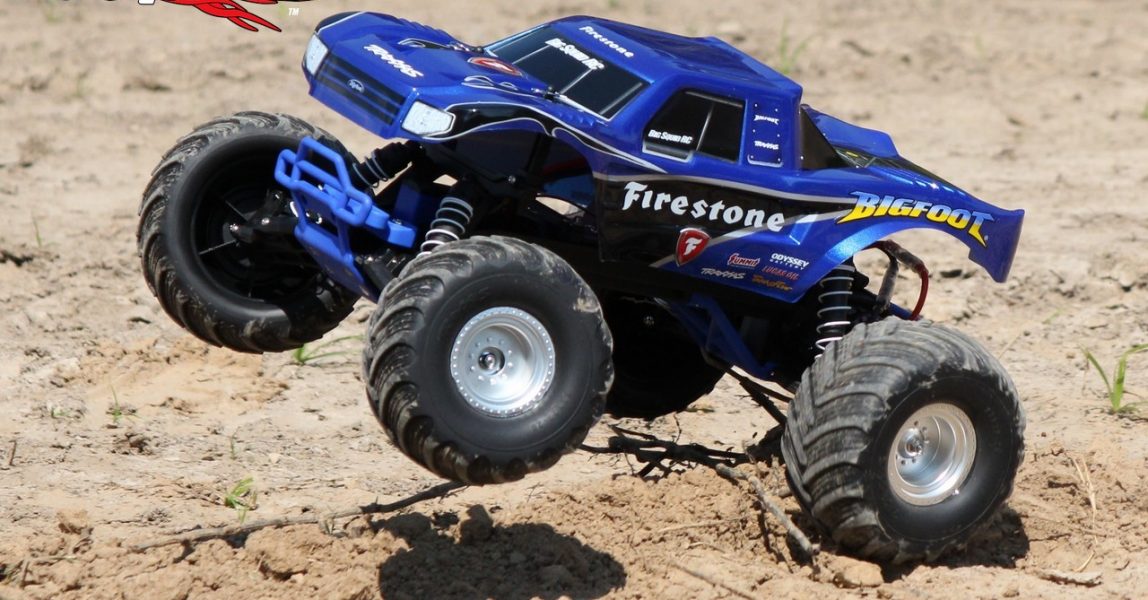 Everybody knows the Bigfoot Monster Truck, it is iconic in the world of trucks and off-roading. For some people, especially those that grew up in the ’70s, the truck even holds special meaning, like the first time you went to a monster truck rally with your family, or remembering it blew your mind as you watched it leap over cars on TV.

Traxxas recently released a fully licensed version of one of the modern Bigfoot Monster Trucks. It comes with a scale authentic body and sits on a legendary Stampede chassis. After having some of Bash Crew members fight over who got to drive it first, we gave it a serious bashing. How does the new Bigfoot hold up? Does it have enough power to be fun? Does it turn heads down at the local bash spot? Read on to find out the scoop…

Primary Competition: The primary competitors to the Bigfoot are the ECX Ruckus and the ARRMA Granite.

What’s Needed To Complete: The Bigfoot comes with a battery pack and charger, all you need to supply is four AA cells for the transmitter.

Build Quality: After passing the truck around the room, we did not find any problems with the assembly of our review truck. The shocks were properly filled, the tires were well glued, and the pinion/spur mesh was spot on (among other things we checked).

Test Drivers: It seemed like everyone wanted in on the Bigfoot review. We enlisted 2 first day noobie drivers in addition to our test crew of Robbie G, Iron Mike, The RC Kid, T-Money, Sam The Noob, and yours truly.

Set-up Notes: Just like we do for the vast majority of our reviews, we ran the Bigfoot bone stock. We used the included battery as well as the stock battery connector. However, we did not use the included charger, instead opting for a Venom Pro Quad.

Turning: Many of you have already owned a Stampede, so you know how it turns. For those of you who have never had one, the front tends to have some push. Going into corners while off power, the steering isn’t bad, but any time you are on the gas the front tends to raise, causing the tires to lose traction. Yes, you can learn to corner quickly with the truck, this requires coming in hot to help plant the front tires, then laying off the gas for long as possible past the apex (at least on sweepers). In tight 180s, the Bigfoot is really good at point-n-shoot. When you enter a tight corner give the truck a tap on the brakes, let it rotate around the apex, then pound the throttle. This method tends to work like a charm for getting around tight corners quickly.

Overall, if you are a noob, having some push is a good thing as first time drivers tend to repeatedly oversteer.

Jumping: While the Stampede chassis tends to jump a wee bit nose high, it is often considered the best jumping truck in its class. The same holds true with the Bigfoot version. The Bigfoot does a good job of taking off straight and absorbing huge landings. Also of note, its brushed power system does a decent job of bringing down the nose (or raising it) when needed. We found the Bigfoot easy to jump and were impressed with how it landed big jumps. Seriously, you could roof jump the thing to pavement and it would easily soak up the nastiest of hits.

Bumps/Whoops: The Bigfoot comes a bit underdamped on the front shocks. This causes some excessive bouncing when tackling tough terrain. The rear does a great job with suspension settings that are right in the ballpark. When pinning the truck WFO through large dirt clods or through big braking bumps, the front bounces around which can create issues keeping it straight on the intended path. This is easily cured with slightly heavier front oil and has been a signature trait of the Stampede platform for years.

On-Road: Nope, the Bigfoot was not really intended for on-road driving, but you can still have fun driving it there. It loves to pop wheelies and has enough power to be interesting, but does traction roll when cornered at speed.

Grass: Grass was chewed through fairly easily by the Bigfoot. The stock tires do a solid job in grass while its high ground clearance chassis keep it from scrubbing speed. If you do a lot of grass driving, you will have a blast with the Traxxas.

Tires: Both the stock wheels and tires have a very nice scale appearance, perhaps the best on the market. The chevron tread certainly isn’t the best for pavement or other high-bite conditions, but do work in grass and loamy soil. No, the truck does not come with foam inserts, which has a number of downsides and one upside. We definitely noticed the lack of foam inside the tires when hitting bombed out whoop sections, but perhaps more so when driving at high speed in a straight line. Without inserts the sidewalls flex like mad, making it harder than it should be for even experienced hobbyists to drive the truck in a straight line. Oh and, that big upside to no foams? That would be for you guys that drive in a bunch of water. Typically foams will get filled with water, which is really heavy and makes the tires go wayyyy out of balance. Also, foams tend to rot and deteriorate after getting wet. That isn’t a problem on the Bigfoot. After you drive in water, simply squeeze each tire to make sure the excess H2O comes out the vent, then continue on.

Power: A typical brushed system comes in the Traxxas, which means it is fast enough to give a thrill to noobs while being quick enough to keep long time drivers interested. The Bigfoot can easily pull a wheelie from a dead stop, then rips through the mid-range, ended with a 25 mph top speed. The stock speedo drives fairly smoothly and the transition between reverse/to neutral/to forward is well done on the XL-5 ESC.

Radio: The new era TQ radio is muchhhhh better than old school units. The wheel has decent foam on it and the grip is one of the most comfortable to be found on a RTR unit. We never experienced any issues with range or glitching. To boil it down, it gets the job done.

Broken Parts: Per the norm, one of our reviews isn’t over until the truck is busted up. Our Bigfoot took a lot of abuse during our test period with minimal broken parts. After our first roof jump we managed to shift the motor slightly which burnt off the spur gear. A trip to the LHS later we quickly had the truck back up and running. Then we pounded on the truck like it owed us money and it held up very well. Later in testing a shock cap popped off the front, and we managed to break a front hub, but even after some pretty serious abuse we did not break anything major.

Nobody on our test crew had anything to say about the stock servo. That is a good thing. While not blazing fast, it go the job done with no complaints.

After a long run in hot temps, we shot the motor at 150 degrees. This is a bit on the warm side so you won’t want to be gearing up the truck unless you are only making short runs.

While the stock battery performed well, it ran hotter than expected. Hot enough where you would feel the heat from under the plastic chassis.

The Bigfoot comes with bushings at the wheels. Some hardcore hobbyists will certainly moan about that fact as they aren’t as efficient as ball bearings. But like the tires with no foams, if you do a lot of driving in water, bushing can be an advantage. Bearings love to lock solid after getting wet, that typically isn’t the case with bushings.

Yes, just like previous Stampedes the Bigfoot absolutely loves to wheelie. Seeing as how most bashers love driving around with the front tires high in the sky, that attribute can be a big plus for some drivers.

The Bigfoot came with an excellent owners manual. In an era when manufacturers are cutting back on things like that, it was nice to receive a good one. A good manual makes a truck easier to work on and to get proper part numbers.

Best Mod: Hummmmm…. with so many trick aftermarket parts already on the market for the Bigfoot, it is hard to pick a single first mod to make. If it was us and our money, we would either pick up a good 2S LiPo which would immediately give the truck more power and runtime, or we would ditch the stock wheels/tires and bolt on some Pro-Line units. Some aluminum shocks caps would also be right up there on our list.

Time To Bash: B The Bigfoot is par for the course during set-up. It doesn’t take long, simply charge up the NiMH, pop some AA cells into the transmitter, and it is ready to bash.

Workability: B Traxxas trucks are typically easy to work on and the Bigfoot is no different, but we would really liked to have seen hex hardware instead of Phillips used on the truck.

Car Show Rating: B The body is fantastic, the wheels & tires look incredibly good, but we couldn’t give the truck an “A” because of its lack of scale detailing on its chassis.

Bash-A-Bility: B We had very good luck while bashing our test unit. Sure, we broke a few parts here and there, all of which were cheap and easy to fix.

Fun Factor: A Our noobie drivers emphatically loved driving the Bigfoot. Our experienced hobbyists loved its look and appreciated the fact that it had enough power to keep things interesting.

Handling: C The Bigfoot runs a shorter wheelbase than other trucks in its class and its front suspension could use heavier oil. No, it isn’t the best handling truck in its class, but it might be the most fun.

Value: A We thought that the truck was a great value at a $199 price point with a fully licensed Bigfoot body. It came with a battery and charger, nice additions at less than $200.

Parts Availability: A Traxxas absolutely kills this category. Parts for the Bigfoot are Very easily found on the pegs at most hobby shops. Traxxas simply has the best parts network on the planet.

BigSquid Rating: B+ The Traxxas Bigfoot Monster Truck is a solid basher and a fun truck to drive. The body is a great reproduction of the current Bigfoot race truck and we can highly recommend the truck to you. Whether you are a first time driver, or are just looking for something to bash around your backyard, the Bigfoot makes it easy to have fun.